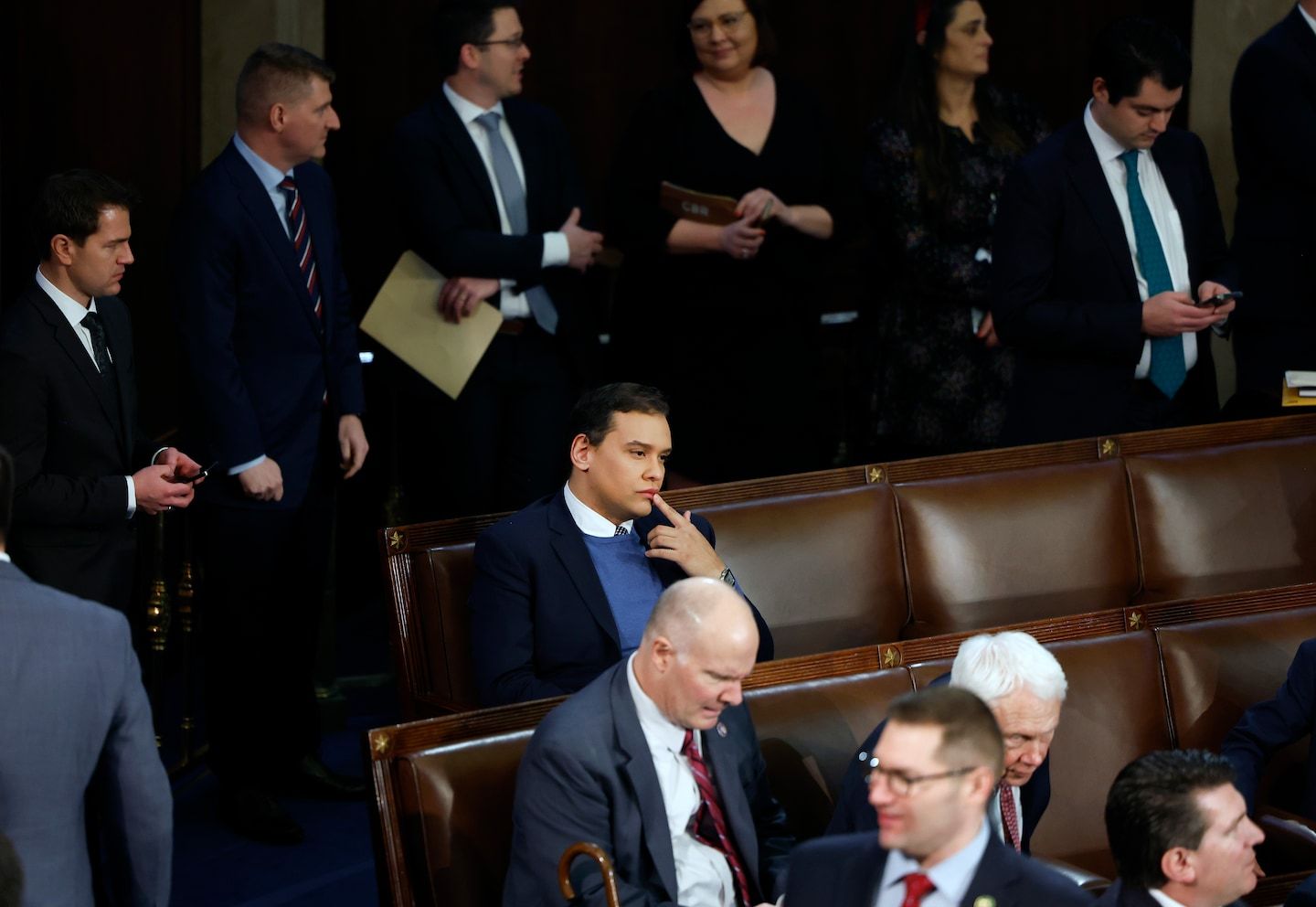 On Tuesday, looking very much like a freshman at a prep school in hell, congressman-elect George Santos wore a black backpack, a periwinkle sweater underneath his navy jacket, and a sullen face with darting, evasive eyes, as if looking to see if anyone on Capitol Hill was going to accuse him of yet another lie about the basic facts of his existence.

A posse of journalists assembled before 9 a.m. Tuesday to stake out Santos’s new office on the first floor of the Longworth House Office Building. The accused serial fabulist is now being investigated by the attorney general of New York, the district attorneys of Nassau County and Queens, and the government of Brazil.

“I only found out that he was my next-door neighbor about 20 minutes ago,” Rep. Don Beyer (D-Va.) said around 9 a.m. “It’s a surprise and delight.”

Santos, 34, was elected in November to represent the third district of New York, which includes the Gold-Coast enclaves on Long Island used by F. Scott Fitzgerald to stage “The Great Gatsby,” whose titular character’s background was mysterious at best, shady at worst. The North Shore Leader, a local newspaper, reported that Santos listed no property on his financial disclosures despite claiming repeatedly to own mansions in Oyster Bay Cove and the Hamptons. The newspaper’s editorial board, keen to support a Republican, instead endorsed Democrat Robert Zimmerman, calling Santos a “bizarre, unprincipled and sketchy” man who “boasts like an insecure child.” Voters elected Santos anyway, flipping a crucial seat for the Republican Party, which barely eked out a majority in the U.S. House of Representatives. Last month the New York Times delineated apparent fabrications in Santos’s work and educational backgrounds: He apparently did not work at Goldman Sachs or Citigroup; he apparently did not go to Baruch College or New York University. (“It is no surprise that Congressman-elect Santos has enemies at the New York Times who are attempting to smear his good name with these defamatory allegations,” Santos’s attorney, Joseph Murray, said in a written statement at the time.)

“If I disappointed anyone by my résumé embellishment, I’m sorry,” Santos, who has denied any criminal wrongdoing, told WABC radio in New York last week, adding: “I will be sworn in. I will take office.”

“He’ll get sworn in,” Beyer agreed, as the Hill press awaited Santos. “Politicians lie. He may have gone a little overboard.”

Around 10:01 a.m., Santos appeared down the hallway from his office, saw the cameras, pressed a phone to his ear, and disappeared. Journalists pursued him. One jumped on a downward elevator. One jumped on an elevator going up. Two more scurried down a spiral staircase to catch a man who was walking with Santos. He picked up the pace as a journalist called out, “Do you work for George Santos?”

“No,” the man said while fleeing.

Around 10:15 a.m., shortly after his initial disappearance, ABC journalist Lalee Ibssa found Santos walking toward the Capitol subway. She recorded him on her phone for 45 excruciating seconds.

“Do you feel like you’re qualified to serve in this Congress right now?” Ibssa asked.

“How do you hope your constituents can trust you, even though that you misrepresented your biography to them?”

“Do you hope to carry out your full term?”

Journalists found Santos again about an hour later, mobbed him with cameras and bellowed questions. Santos, backpack still on, was silent as he walked down the hall. At one point a strange smile of exasperation flashed across his face. After apparently passing his office, he doubled back. (Attempts to reach Santos for comment on his first day were unsuccessful.)

Democrats have compared Santos to the chameleonic antihero of the novel “The Talented Mr. Ripley,” or the highflying con man in the film “Catch Me If You Can.” Some Republicans called for investigation and accountability. “You gotta change your life,” said recently retired Congressman Kevin Brady (R-Tex.) on Fox News Sunday, appearing to address Santos. By noon, he was seated alone on an aisle in the last row of he House chamber.

Around him members-elect hugged, kissed, laughed, took selfies. The vibe was that of a joyful family reunion. Even Rep. Paul A. Gosar (R-Ariz.) chatted at one point with Rep. Alexandria Ocasio-Cortez (D-N.Y.), despite having tweeted an animated video in 2021 that depicted him killing her.

The main drama of the day was Rep. Kevin McCarthy’s desperate bid to become Speaker of the House in the face of opposition from within his party. Since Santos’s deceptions had been unspooled, McCarthy had declined to move against him. Someone close to McCarthy said they had been in touch with Santos’s lawyer and had been assured that he hadn’t done anything illegal. Stupid, maybe, but not illegal. Stupid, maybe, but not illegal. And McCarthy needed all the votes he could get.

By Tuesday afternoon, he didn’t have enough; the California Republican kept falling short of the votes he needed, which delayed the swearings-in.

All day the Capitol vibrated with pride and excitement and expectation, as families joined members-elect for photos and cheering. Santos, however, was unable to relish his achievement. After he found refuge from Capitol Hill reporters on the House floor, C-SPAN lingered on Santos with painful regularity. For long stretches of time, no one sat directly next to him. His nearest seatmates were the squirming children of members-elect. Santos alternated between staring at his phone and glancing quickly around the chamber, the proverbial school cafeteria. He yawned a lot. He scratched his chin, his cheek, his lips. He fidgeted. He wiped his left index finger around the rim of his right nostril. As Fitzgerald wrote of Gatsby: “He was never quite still; there was always a tapping foot somewhere or the impatient opening and closing of a hand.”

At 12:02 p.m., the House chaplain opened the session with a prayer to God: “Lay on the shoulders of these men and women the mantle of responsibility and accountability.”

Then, the first alphabetical roll call for speaker. Santos was 344th in line.

He then made his first and only public utterance of the day so far: “McCarthy.” It was a team-player move for a team that needed his vote, disgrace be damned.

“Mentiroso!” shouted someone from the Democratic side, using the Spanish word for “liar.”

Marianna Sotomayor contributed to this report.