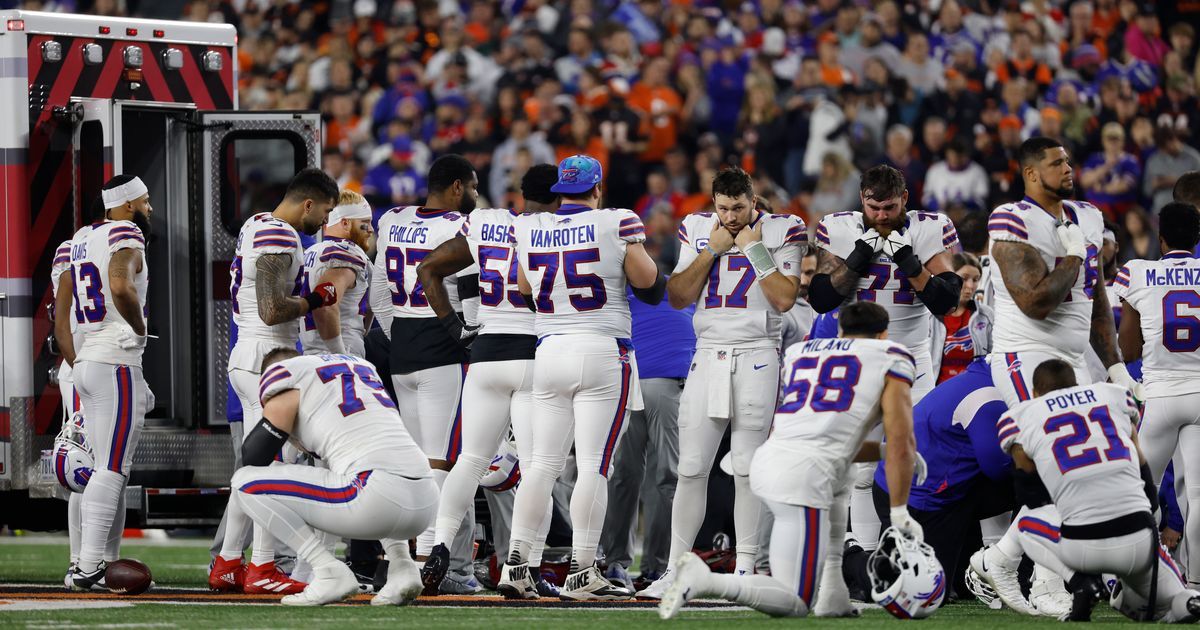 Football fans were stunned Monday night after Buffalo Bills safety Damar Hamlin collapsed on the field during a game against the Cincinnati Bengals. Medical professionals administered CPR before the 24-year-old player was loaded into an ambulance and rushed to the hospital.

According to a statement from the Bills released early Tuesday, Hamlin suffered cardiac arrest after a tackle. “His heartbeat was restored on the field and he was transferred to the … [University of Cincinnati] Medical Center for further testing and treatment,” the statement notes. “He is currently sedated and listed in critical condition.”

The game was postponed after the distressing incident, which left players visibly shaken. Although officials have not released specific details about the cause of Hamlin’s cardiac arrest or his prognosis, the news story has put a spotlight on this type of medical emergency and the potentially lifesaving steps bystanders can take.

What Is Cardiac Arrest?

“Cardiac arrest is when your heart stops completely and is no longer pumping blood to your vital organs, like the brain, liver and kidneys,” Dr. Comilla Sasson, the vice president for science and innovation for emergency cardiovascular care at the American Heart Association, told HuffPost.

Cardiac arrest can stem from a known heart condition or occur suddenly and unexpectedly. The most common cause is ventricular fibrillation ― a type of arrhythmia, or irregular heartbeat. It’s an electrical disturbance that prevents the heart from doing its job properly.

“There’s been some speculation that what happened to Damar Hamlin was something called commotio cordis,” Sasson said. “Something hits you in the chest ― blunt chest trauma ― and does it at the exact time your heart is contracting. That sets your heart into an irregular rhythm, ventricular fibrillation, so your heart can no longer pump like it should, leading to cardiac arrest.”

Commotio cordis was first described in the context of 18th-century laborers, but more recently this sort of blunt trauma event has tended to occur in sports like baseball, hockey, lacrosse and football. Although several medical experts have pointed to commotio cordis as a potential explanation for Hamlin’s cardiac arrest, they’ve also emphasized that the public is not privy to the personal medical information necessary to identify a cause.

“Genetic conditions can make your heart have an irregular heart rhythm,” Sasson said. “Athletes can also be prone to something called hypertrophic cardiomyopathy,” she added, describing it as a thickening of heart muscle that is sometimes seen among elite athletes engaged in heavy training.

As with Hamlin, anyone admitted to the hospital following cardiac arrest will undergo testing to determine a cause and treatment protocol.

Although people often use the terms “cardiac arrest” and “heart attack” interchangeably, they are different medical events.

“Heart attack, in the colloquial sense, is what we would refer to as an acute myocardial infarction,” said Dr. Matthew Tomey, a cardiologist and the director of the cardiac intensive care unit at Mount Sinai Morningside. “Some of the heart muscle is severely jeopardized or dies, typically due to an insufficiency of oxygen supply compared to demand for oxygen.”

Basically, there’s an artery blockage that prevents oxygen-rich blood from reaching part of the heart, and if it’s not reopened quickly, that section can die. So in a heart attack, the heart is still pumping, but the blood supply is cut off. With a cardiac arrest, the heart is not pumping.

While a cardiac arrest happens quickly, the symptoms of a heart attack more often build slowly (though they can be immediate as well).

“Many patients will have a heart attack and slowly feel the classic symptoms of chest pain and shortness of breath,” said Dr. Lawrence Phillips, a cardiologist at the NYU Langone Health medical center. “They then come to the emergency room hopefully early, where professionals diagnose a heart attack and open up the blood vessel that has the blockage using catheters and stents. There can be damage to the heart muscle, but we can decrease that risk.”

With a cardiac arrest, it’s important to immediately start providing emergency care, as every minute makes a difference for the chance of survival.

“When someone has a cardiac arrest, it’s really an acute cessation of the heart’s ability to provide blood, usually from an arrhythmia, so the heart is not able to pump,” Phillips said. “It’s often very abrupt. Someone will slump over or collapse. We try to use whatever means we have to bring them back.”

The Importance Of CPR For Treating Cardiac Arrest

The American Heart Association estimates that more than 356,000 cardiac arrests occur outside a hospital in the U.S. each year, and about 90% result in death.

“There is a range of outcomes for individuals who survive cardiac arrest,” Tomey said. “The best outcome is to return to your baseline level of function physically and neurologically. Some individuals will survive but have some degree of residual neurologic impairment, and the degree can range quite widely.”

Your best chance at improving someone’s outcome after cardiac arrest is to act fast by administering CPR. In the case of Hamlin, the NFL confirmed that he received CPR on the field, and others present reported the use of an automated external defibrillator, or AED, as well.

“Once cardiac arrest starts, blood flow stops,” said Dr. John Bozinovski, a cardiac surgeon at The Ohio State University Wexner Medical Center. “Two organs that are quite sensitive to lack of blood supply are the brain and heart, with the brain being exquisitely sensitive to injury. If blood circulation is not restored, brain injury can start within minutes and become irreversible shortly thereafter. The longer the lack the blood flow, the greater and more extensive the injury to the brain and other organs.”

CPR is a way to restore blood flow, using mechanical energy to move blood to the vital organs. By doing chest compressions, you essentially act as a person’s heart while theirs isn’t working.

“The prompt administration of CPR can double or triple likelihood of survival by getting oxygen back to the body,” Phillips noted.

In the event of a cardiac emergency, Dial 9-1-1 and administer hands-only CPR along with an AED, if available. https://t.co/EECGGxm9fG

And you don’t have to be formally CPR-certified to perform the lifesaving procedure. The American Heart Association recommends using “hands-only CPR” in the event of a cardiac emergency.

“Conventional CPR, which is typically used by trained health care providers, utilizes chest compressions and mouth-to-mouth breathing, whereas hands-only CPR does not use mouth-to-mouth breathing and is meant to be utilized by the public at large,” said body performance and injury expert Rami Hashish. “Outside of the hospital, hands-only CPR has been found to be more effective in preserving life than conventional CPR. Reasons as to why this may be included poor quality of, and time loss during, mouth-to-mouth ventilation by the nonmedically trained public.”

The health experts who spoke to HuffPost emphasized how easy hands-only CPR is to learn and pointed to short videos that demonstrate how to do these chest compressions. While medical professionals might be well versed in combining chest compressions and mouth-to-mouth (along with other tools at their disposal), the general public tends to feel less comfortable with traditional CPR and thus less inclined to act swiftly in an emergency.

“We’ve found that with hands-only CPR, people feel much more empowered to take action and do something,” Phillips noted. “Take those moments to learn. Almost 90% of cardiac arrests occur in the home or workplace, so take a few minutes to learn this skill because the person who might need it could be your family member or co-worker.”

What Should You Do In The Event Of Cardiac Arrest?

“If you are experiencing a cardiac arrest, try to get to a place where you are not alone, or signal to someone you are in distress before you are incapacitated,” Bozinovski said, noting that it sometimes happens too fast for you to dial 911, so asking someone nearby is best.

If you suspect someone else is experiencing cardiac arrest, take prompt action. Check for signs of consciousness, a pulse or breathing. Ask another bystander to call 911 or make the call yourself if no one else is around. Then begin hands-only CPR.

“Put your hands at the center of the chest and push hard and fast until help arrives,” Sasson said. “Try to push at a rate of 100 to 120 beats per minute ― the tune of ‘Stayin’ Alive’ or ‘Hips Don’t Lie.’”

Another important step is checking for an available AED, which can reset the heart’s natural rhythm. AEDs are typically available at workplaces, schools and sporting venues.

“Doing CPR immediately until such time that the defibrillator can be brought to the person in distress is important at limiting the time of no blood supply to the brain and other organs,” Bozinovski said. “Have a third person bring the AED and follow the instructions. These devices are made to provide guidance [on] how to place the paddles, will read the rhythm and provide shock if indicated.”

He suggested watching a video or taking a course to learn more about using an AED as well. Still, Sasson emphasized that these devices are designed to be used by those without prior experience.

“A lot of people are very fearful. ‘What if i do it wrong? What if I shock someone who shouldn’t be shocked?’” she said. “But it’s built to determine if the person needs a shock. You cannot hurt somebody with an AED.”

Ideally, the person’s pulse will be restored and medical professionals can transfer them to the hospital, as was the case with Hamlin. Although the public will likely have to wait for more updates on the NFL player’s condition, there are steps you can take to make your family and community safer and more prepared for cardiac emergencies.

“People feel helpless right now beyond praying for Damar and his family,” Sasson said. “But I hope people will also take a few minutes to watch the AHA’s CPR videos and share them with loved ones.”

She also recommended making an emergency response plan for your household and reaching out to your children’s schools, community centers and sporting facilities to make sure there are procedures in place for a cardiac arrest event there as well.

“Ask who is trained in CPR, where the AEDs are located, how often they’re charged, if they’re always accessible, who calls 911,” Sasson said. “These events aren’t as rare as people think. Preparedness and early recognition are everything.”