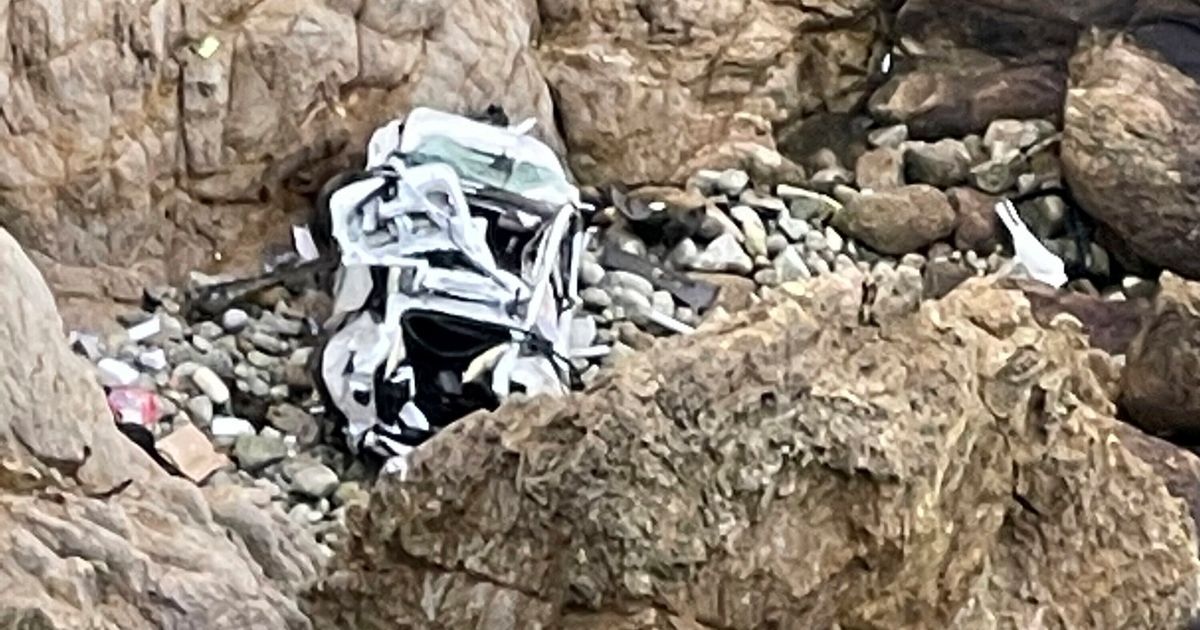 Two adults were traveling with a 9-year-old boy and a 4-year-old girl on Monday morning when their sedan went over a cliff near the Devil’s Slide, a site of frequent wrecks on the Pacific Coast Highway.

They lived to tell the tale after being rescued, per CBS News.

In footage tweeted by California’s Department of Forestry and Fire Protection, battalion chief Brian Pottenger said the car appeared to have “flipped several times.” Photos of the scene showed the Tesla’s demolished body wedged between the cliff and the surf.

“We were able to notice movement in the front seat through the windshield with binoculars,” said Pottenger, who sent rescuers down. “So we knew that we had at least one person that was alive. At that point, we did not know how many people were in the vehicle.”

Devil’s Slide, which includes a 1.3-mile trail for hikers, runners and cyclists, is as steep as it is rocky. The winding stretch, about 15 miles south of San Francisco, is notoriously hazardous to drivers ― and those who go over the cliffside rarely survive the fall.

“I don’t even like driving it,” Pottenger told CBS News. “It’s definitely a treacherous stretch of California.”

This morning, a vehicle with 2 adults and 2 minors went over cliff at Devil’s Slide in @sanmateoco. Witnesses saw the accident and called 911. The car plunged hundreds of feet down the cliff and landed on the beach. All four patients were successfully rescued. Watch the video! pic.twitter.com/HUM2SJ56Oy

Pottenger and his team initially expected to recover bodies when witnesses called 911 at 10:15 a.m. Pottenger said in the footage that they were “actually very shocked when we found survivable victims in the vehicle” — who were both conscious and alert.

“We go there all the time for cars over the cliff and they never live,” Pottenger told CBS News. “This was an absolute miracle.”

Firefighters used rescue tools to pry the car open. The children were taken out from the rear windshield with moderate musculoskeletal injuries and manually pulled to safety in a rescue basket. The adults were helicoptered to a hospital with traumatic injuries.

Officer Mark Andrews of the California Highway Patrol said an initial investigation found the Tesla wasn’t in Autopilot or Full Self-Driving mode when it crashed. The road itself was in good condition, though the crash site lacked a guardrail that might have prevented the fall.

Tesla has also come under repeated fire for its reportedly unreliable autopilot. In June, the National Highway Traffic Safety Administration said it had documented more than 200 crashes that involved Teslas using a partially automated driving system, and that Tesla’s crash rate per 1,000 cars is far higher than those of other firms.