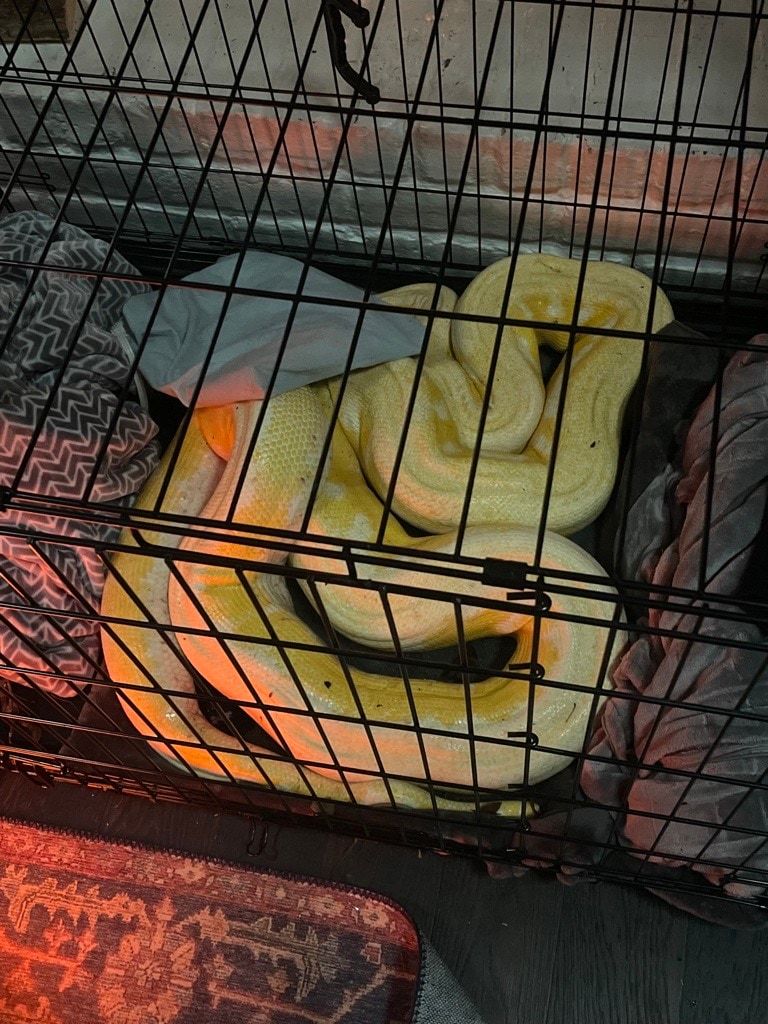 Patrick Fortune was walking his dog Ka’Hu in his Austin neighborhood when he spotted something long and yellow down a ravine 30 feet below him.

It took him a few seconds, but then he remembered a post from Nextdoor over the summer: A 16-foot albino reticulated python had been reported missing in the neighborhood after it was stolen from a van, its owner said.

This had to be the snake.

Someone named Daryl Fields posted in July that his python, named Snow, was taken from his vehicle in its travel tote while he was visiting Austin from Dallas.

“She is a big gentle giant,” Fields wrote. “I’m sure whoever broke in my vehicle freaked out realizing it was a snake inside. Please give me a call if you hear or see anything.”

Fortune, 34, recalled that a few people had reported seeing the snake on a walking path near his Coronado Hills neighborhood that first week, but he hadn’t heard of any other sightings.

“The snake was big enough to take cats and pretty much anything else it wanted, so people were a little worried,” said Fortune, who did not have any experience with snakes, including pythons. “But then it disappeared, and everything calmed down. We figured it was gone.”

Hundreds of freezing bats fell to the ground. She took them home to warm them.

When Fortune realized that he had found the missing python that day — Dec. 19 — he said he took his dog home and told his girlfriend, Raven Zimmer, what he’d seen. He wasn’t sure if it was alive or dead, he said, but if it was alive, they should rescue it.

Fortune said he’d seen plenty of cottonmouth snakes and rattlesnakes in Texas, and he’d once come across a 5-foot bullsnake.

“I knew that pythons were tropical — they like to be warm,” he said, noting that it been cold in Austin for several weeks, and it was 45 degrees outside on the day he spotted Snow.

Both he and Zimmer have soft spots for animals in need.

“Raven and I are animal lovers, and we’ve helped rescue owls and rabbits before,” Fortune added. “Rescuing the snake seemed like the right thing to do.”

He and Zimmer, 33, said they had no idea how to care for a freezing python, but they figured that warmth and a large container to put the snake in would be key.

They quickly warmed up a heating pad in the microwave, grabbed a few towels and loaded their large dog carrier into Fortune’s truck.

When they arrived at the top of the ravine, another neighbor called the Austin Animal Center and was told it would take a couple of hours to get an animal control officer on the scene to help, Fortune said.

He figured that if the snake was still alive, it didn’t have the luxury of time, due to the cold weather.

“The embankment was pretty steep, but Raven walked on down, and I grabbed the crate and shuffled it down,” Fortune said.

“The snake looked dead to us, but Raven reached out and touched it, and we were surprised when it moved,” he added. “I thought, ‘Oh! That’s different. Now what do we do?’”

He decided to snap a few photos of the snake and text them to people he knew in the neighborhood, hoping that someone would help him and Zimmer get the 75-pound python into the dog crate and push it up the hill.

When Dillon Dority, 29, received a text from a family member that the snake had been found, he immediately rushed over from his parents’ house, across the street from the ravine.

“I like the strange and unusual, so I was all in,” he said, adding that he knew nothing about large reticulated pythons but once had a boyfriend who kept a small ball python as a pet.

The trio decided that Fortune would firmly hold the snake behind its head while Zimmer and Dority picked up its body and scooted it into the carrier.

“Because we have lots of snakes in Texas, I knew it was common practice that if you grab them behind the head, you’ll have power over them because they can’t strike you,” Fortune said.

A disabled man was stuck in a Buffalo snowbank. A stranger heard his cry and saved him.

“The snake didn’t seem to like that,” he noted. “It reared up and opened its mouth, and it gave me a ‘don’t mess with me’ look.”

Although Snow was 10 inches wide and its hiss was intimidating, Fortune said he and the others were determined to see the rescue through. They were not afraid of getting bitten or constricted, because the snake was moving slowly in the cold, Fortune said.

“We were genuinely worried about the snake — it could freeze to death in the cold,” he said. “We tried picking her up again, and she became lethargic and didn’t fight us this time. She was struggling to survive.”

“She was ice cold — it was like picking up a cold, slimy rock,” Dority added, noting from his experience with his ex-boyfriend’s snake that he knew pythons thrived in a warm climate of 80 to 90 degrees.

“When a python is exposed to the cold, its body starts to shut down,” he said. “We knew we had to get it warm.”

He and Zimmer tucked the heat pad and blanket around the snake in the carrier, then all three of them pushed and pulled the heavy crate up the embankment. They decided to take the python to Dority’s house because he lived the closest.

“We took the snake inside, and I got some wood and Patrick started a fire,” Dority said. “The fire started roaring and I also started up a space heater.”

Dority had an infrared digital thermometer, so he held it to the snake’s head every few minutes and took its temperature.

“The first time, it read 53 degrees,” he said. “Raven was googling for information about pythons and learned [the temperature] was supposed to be in the 70s. So we were relieved when it started going up.”

“It was a happy feeling to know that the snake was alive and coming around,” Zimmer said. “I’m really impressed that it survived in the cold as long as it did.”

About 90 minutes into their herpetology urgent care, the doorbell rang, Fortune said. JT Moorman, a senior animal protection officer with the Austin Animal Center, had arrived to pick up the snake.

When Moorman walked into the living room holding a small cat carrier, everyone burst into laughter, Dority said.

Moorman said he’d received a call that he needed to retrieve a python and he had no idea how massive it was.

“I’ve gone on a lot of calls like these, and they’re usually three-foot pythons,” he said. “A 16-foot, reticulated python? I was flabbergasted. This was a first.”

Snow probably survived for nearly six months in the ravine by eating mice and rabbits and the occasional possum, he said.

After the others helped him to transfer Snow into a kennel in the back of his truck, Moorman drove the snake to the Austin Zoo to be held temporarily while other animal control officers tracked down Snow’s owner.

Daryl Fields drove to Austin a few days later to pick Snow up, posting on Facebook that he was “so glad to have my baby back.”

Fields did not respond to requests from The Washington Post for comment, but he told Austin’s KXAN News that being reunited with Snow was the best Christmas present he’d ever had.

Fortune said he hopes the snake is warm and happy now that she’s back home.

“It isn’t every day that you find a 16-foot python in a creek bed,” he said. “She was probably living her best life down there until it got cold.”

“I’m not a snake person,” Fortune added. “But I’m really glad she made it.”