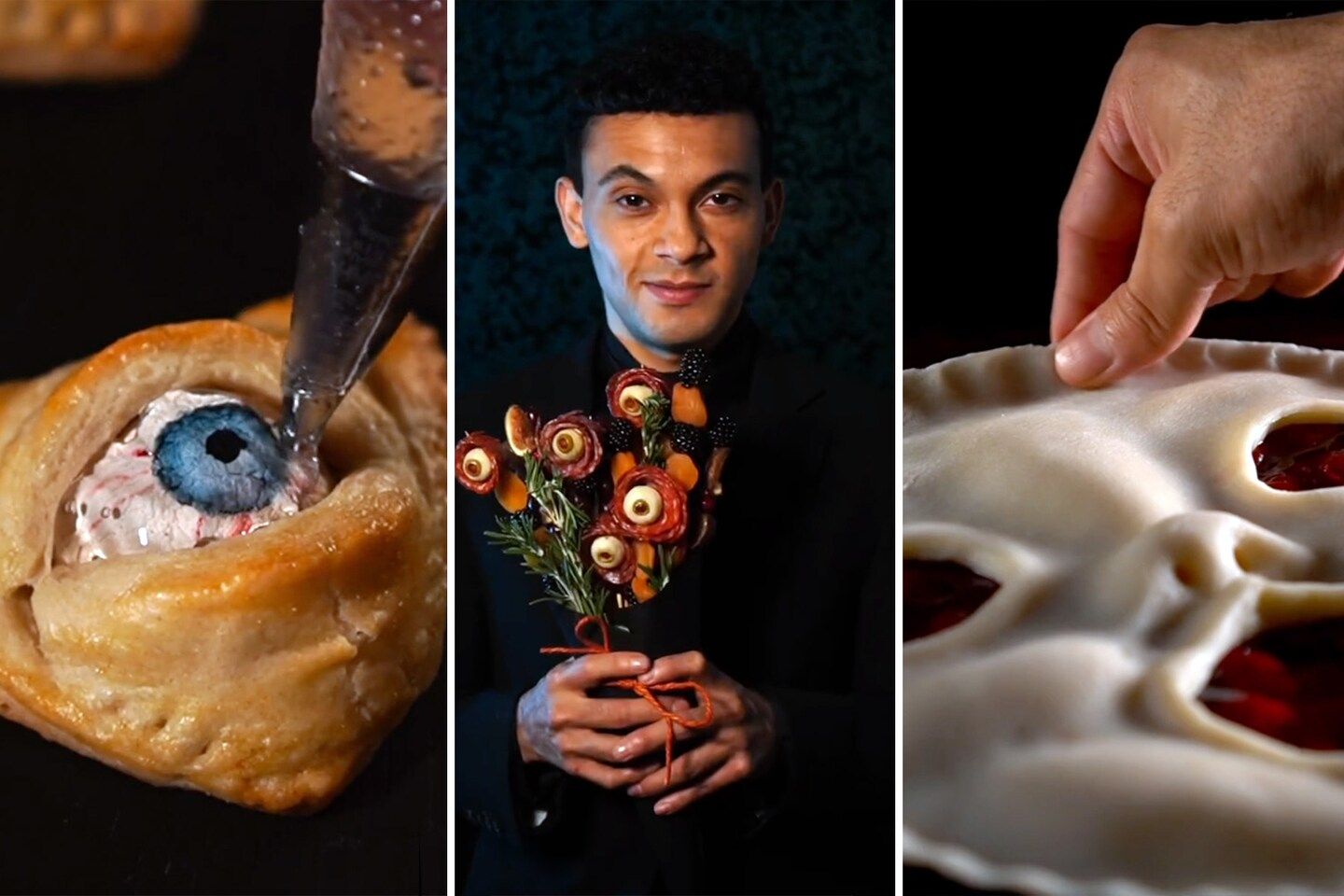 Halloween happens only once a year, but Nikk Alcaraz refuses to wait a full 365 days for his favorite holiday. Fortunately for this expert crafter and serial baking enthusiast, no ghost is left behind in the time-bending world of TikTok.

Meet the home cooks, bakers and chefs whose recipes are taking off on TikTok. Each week, we’re profiling a new source of cooking inspiration.

Known as Practical Peculiarities to his more than 900,000 followers on the social media platform (@nikkalcaraz), Alcaraz, 28, features spooky, edible creations all year round. In his videos you’ll find him channeling Frankenstein while inhaling frightful foods, including cookies and cakes loaded with fake eyes, blood and brains, and always doing so with a devious grin.

Halloween, a holiday beloved by crafters around the world, has long held a sentimental place in Alcaraz’s heart. Raised by his grandmother Georgianna Dofflemyer in Santa Fe, N.M., he always looked forward to spending the spooky season with her. Together, they watched and re-watched Tim Burton films and “Hocus Pocus” and brainstormed outlandish homemade costumes, even well after October.

Because they didn’t have much money, Alcaraz quickly learned to be scrappy in the kitchen and at the craft store. “A lot of things that I had to craft with were things around the house,” he says. “And if I did need to go to the craft store, she would say, ‘You only have $5 to get what you want.’”

That resourcefulness is on full display in Alcaraz’s DIY videos, where he fashions a Halloween feast complete with cobweb funnel cakes and unicorn horns made from meringue. His craftiness even helped him land a spot on HBO’s “Craftopia” in 2021, where he went home with the top prize, for a 1950s Christmas village overtaken by aliens.

Practical Peculiarities began as a photography series in 2019. At its helm, Alcaraz designed the weird and creepy foods while his partner photographed his creations. But he had grander dreams and wished his project might evolve into a live-action show — like “Martha Stewart, just twisted.” It was a lofty goal, but Alcaraz trained himself with the camera, and in 2020, he began posting regular videos on Instagram and TikTok from his Los Angeles home.

Crafting may have been his first love, but his tinkering led him down a baking rabbit hole. Though he ate “normal food” growing up, post-dinner baking offered ample opportunities to experiment. Following the recipes was never his style. Instead, he added pecans and cinnamon to his sweets and treated Bundt cakes as potential Christmas wreaths. Over time, Alcaraz became obsessed with using his kitchen as a playground and substituting food for craft materials.

“I could use marzipan as dough or like crushed cake and frosting as playdough,” he says.

Despite his devotion to Halloween themes, Alcaraz’s most popular video debuted not in October but just in time for a holiday associated with chocolate-obsessed lovebirds. For Valentine’s Day in 2021, he posted a video of a miniature heart-shaped pie with an apple-cherry filling.

Of course, it wouldn’t be Practical Peculiarities without a creepy twist. Taking inspiration from “you’re the apple of my eye,” Alcaraz added a realistically painted edible eye to the center of the pie. Quickly, his creation inspired compliments, horrified reactions and even playful taunts from frequent TikTok reply guy and notorious chef Gordon Ramsay: “It’s Valentine’s Day not Halloween, you doughnut. No wonder you’re still single!”

But Alcaraz had an answer of his own: He fried up a voodoo doughnut displaying Ramsay’s face and, sparing no effort, took a massive bite out of the chef’s head.

It’s not just Ramsay who has expressed doubts. Every once in a while, people will get freaked out by Alcaraz’s edible eyes or fake-blood pies.