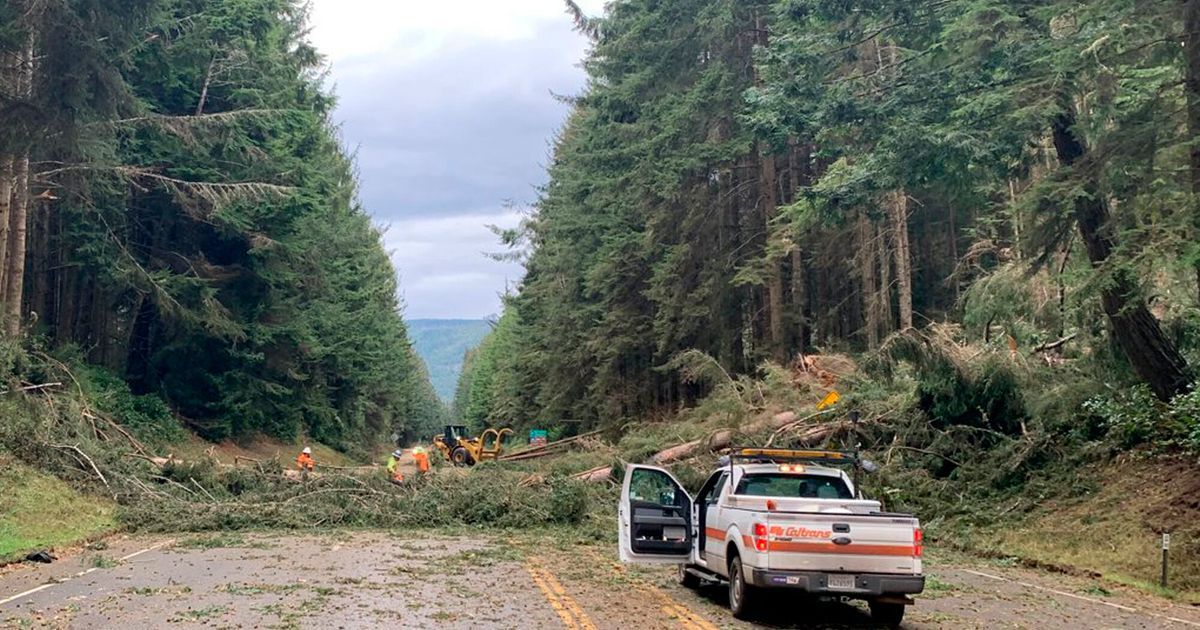 SAN FRANCISCO (AP) — As a huge storm approached California on Wednesday, officials began ordering evacuations in a high-risk coastal area where mudslides killed 23 people in 2018, while residents elsewhere in the state scrambled to find sandbags, and braced themselves for flooding and power outages.

California Gov. Gavin Newsom declared a state of emergency to allow for a quick response and to aid in cleanup from another powerful storm just days earlier. Dozens of flights were cancelled at the San Francisco International Airport, and South San Francisco schools preemptively cancelled Thursday classes. As the storm intensified, state officials warned residents in Northern California to stay off the roads.

The first evacuations were ordered for those living in the burn scar areas of three recent wildfires in Santa Barbara County, where heavy rain is expected overnight, and could cause widespread flooding and unleash debris flows in several areas. Among them is the tony town of Montecito, home to many celebrities, including Oprah Winfrey and Prince Harry and his wife, Meghan Markle.

“We anticipate that this may be one of the most challenging and impactful series of storms to touch down in California in the last five years,” said Nancy Ward, the new director of the California Governor’s Office of Emergency Services.

Officials asked drivers to stay off the roads unless absolutely necessary — and to stay informed by signing up for updates from emergency officials about downed trees and power lines, and flooding. In Northern California, a 25-mile (40-kilometer) stretch of Highway 101 was closed between the towns of Trinidad and Orick due to several downed trees.

Before the storm arrives late Wednesday, Santa Barbara County Sheriff Bill Brown said people should evacuate the areas impacted by the Alisal Fire last year, the Cave Fire in 2019 and the devastating Thomas Fire in 2017, one of the largest in California history.

On Jan. 9, 2018, massive torrents carrying huge boulders, mud and debris roared down coastal mountains, and through the town of Montecito to the shoreline, killing 23 people and destroying more than 100 homes. Among those killed were two children whose bodies were never found.

“What we’re talking about here is a lot of water coming off the top of the hills, coming down into the creeks and streams and as it comes down, it gains momentum and that’s what the initial danger is,” he said.

Storms in the last 30 days have produced between 8 to 13 inches of rain, soaking coastal hills in Santa Barbara County. The current storm is projected to drop up to 10 inches of rain in the area, Taylor said.

“This cumulative rain … is what causes our risk,” he said.

The storm, set to be in full force in Northern California by Wednesday evening, is one of three so-called atmospheric river storms in the last week to reach the drought-stricken state. Because the states’ major reservoirs are at a record low from a dry three-year period, they have plenty of room to fill with more water from the impending storm, officials said.

Still, trees are already stressed from years of limited rain. Now that the grounds are suddenly saturated and winds are heavy, trees are more likely to fall. That could cause widespread power outages or create flood hazards, said Karla Nemeth, director of the state’s Department of Water Resources.

The storm comes days after a New Year’s Eve downpour led to the evacuations of people in rural Northern California communities and the rescue of several motorists from flooded roads. A few levees south of Sacramento were damaged.

In the San Francisco Bay Area, 8,500 sandbags distributed by officials weren’t enough to reach demand Wednesday as forecasters warned of imminent flooding. The South San Francisco Unified School District announced classes for its 8,000 students would be canceled Thursday “out of an abundance of caution.”

Heavy downpours accompanied by winds with gusts of up to 60 mph (96 kph) were expected later Wednesday and through Thursday, making driving conditions difficult, the National Weather Service said. In Southern California, the storm was expected to peak in intensity overnight, with Santa Barbara and Ventura counties likely to see the most rain, forecasters said.

Aaron Johnson, Pacific Gas & Electric regional vice president for the Bay Area, said the company has more than 3,000 employees working in crews of three to five people to assess damages to their equipment and restore power as soon as possible.

Robert O’Neill, an insurance broker who lives and works just south of San Francisco, said he lined up to get sandbags for his garage and for a co-worker’s home to prepare for the storm.

As president of Town & Country Insurance Services, he gave employees the option of working from home Wednesday, which many did, he said. He plans to leave the office early and head home where he has go-bags packed with clothes, medicine, electronic chargers and important papers. He has sleeping bags and three days’ worth of water, nuts and protein bars.

“We’re in a big city, so we wouldn’t be too stranded too long, but you never know,” he said.

The storms in California still aren’t enough to officially end the drought, now entering its fourth year. The U.S. Drought Monitor showed that most of the state is in severe to extreme drought.

Elsewhere, in the Midwest, ice and heavy snow has taken a toll this week, closing down schools in Minnesota and western Wisconsin — and causing a jet to go off an icy taxiway after landing in a snowstorm in Minneapolis. No passengers were injured, Delta airlines said.

To the south, a possible tornado damaged homes, downed trees and flipped a vehicle on its side in Montgomery, Alabama, early Wednesday. Christina Thornton, director of the Montgomery Emergency Management Agency, said radar indicated a possible, but unconfirmed, tornado. The storm had extremely high winds and moved through the area before dawn, she said.

Staff from the National Weather Service’s Chicago office planned to survey storm damage on Wednesday following at least six tornados, the largest number of rare January tornadoes recorded in the state since 1989.