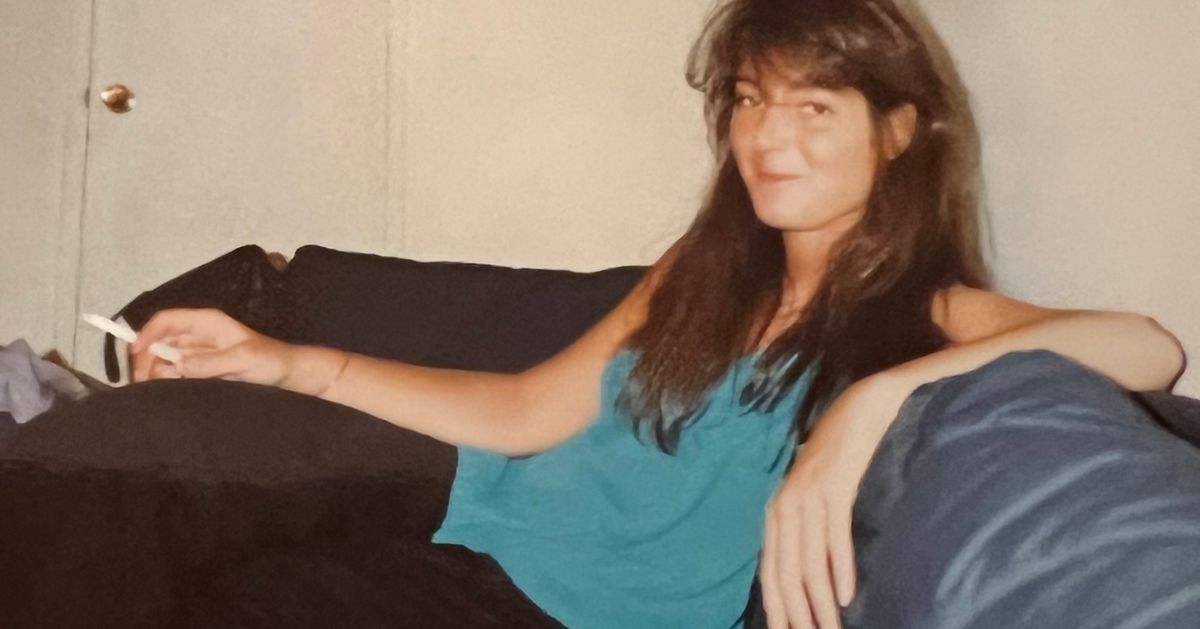 “Where the hell are you?” I yelled, banging on his door at 3 a.m. I couldn’t believe he was mind-fucking me after he’d just told me to travel an hour to see him so late. What game was my guy playing?

No, it wasn’t a lover screwing me over. It was my pot dealer. I was waiting for him in subzero cold, wearing a flimsy blazer with $100 in my pocket, all alone in a strange Queens neighborhood that suddenly seemed dangerous.

I’d rushed there to buy a little bag of strong, light green Hawaiian weed and was somehow surprised that someone who was often stoned and sold drugs for a living would be so unreliable.

Finally he let me into his vestibule, and we quickly exchanged my cash for his stash. Then, afraid to take the subway so late (years before Uber), I had to find another taxi to get home to my Greenwich Village studio and smoke my fix.

I was a nice Jewish girl finishing my master’s program who’d just landed a coveted (albeit low-paying) editorial assistant job at a top magazine. Why was I risking my safety for this middle-of-the-night excursion? I had seen no choice, since I’d unexpectedly run out of my daily dose and couldn’t find anybody closer who had any to share, loan or sell me.

I used to buy dime bags in Washington Square Park blocks away — until somebody sold me oregano and I realized there was no Better Business Bureau to take my complaints. I wanted to get high so badly that my brain flew out the window of the cab I couldn’t afford.

Addiction is desire on steroids. You not only want something, but you’ll do anything to get it, craving it so badly that it feels like you’ll die without it. In my case, that involved repeatedly sweating, shaking, crying and going through withdrawal whenever I couldn’t find it. And yes, you can become physically dependent on marijuana.

I fit the textbook definition of an addict, someone with a compulsive physiological need for a habit-forming substance — many different ones, actually.

In a psychology class, I read about Stanford University’s so-called marshmallow test, which showed that kids who were able to delay gratification would be more successful later in life. I laughed because I’d literally eat a bag of marshmallows myself as a kid, as well as pick through all the Lucky Charms as soon as the cereal appeared in our pantry.

By age 13 in suburban Michigan, I’d become a nicotine fiend like my difficult doctor father because it was a way for me to suppress my appetite. My first boyfriend turned me on to Bob Dylan, dope (as we called it back then) and cocaine, before he slept with two of my roommates while on magic mushrooms.

“To want is to have a weakness,” Margaret Atwood wrote in “The Handmaid’s Tale.” I had a variety of weaknesses over the years. Mixed in with the compulsive consumption of cigarettes and pot were 12 cans of Tab daily and forays into diet pills, champagne, rum (mixed with diet soda), vodka, Juicy Fruit gum, popcorn and cupcake icing.

At 29, I met a kind, older, curly haired scriptwriter who was only addicted to me. I told the boss who’d fixed us up, “He’s smart and sweet, but not my type.” She said: “Your type is neurotic, self-destructive and not into you. Go out with him again.”

We married when I was 35. Right after we said, “I do,” he told me that he hated the smell of smoke in our home and that I had to quit smoking and partying. I threatened to leave him. The only problem was that we’d just thrown big wedding parties with all our friends, colleagues and relatives, and then emptied our savings and borrowed more to buy an apartment. Plus, I adored him.

Luckily, he found me a brilliant new shrink, a tough-talking paternal figure who was an addiction specialist. This was weeks after 9/11, when we were both still in shock and mourning in downtown Manhattan. I’d just turned 40.

“I’m reading obituaries of people my age who were killed. I can’t stop thinking that if I died tomorrow, I’d never have nailed what I really wanted in life,” I selfishly confessed.

“What do you want most?” he asked.

“I want to publish my book.”

I admitted feeling like a loser since the story that I’d spent seven years revising kept getting rejected. I’d helped so many students find agents and editors; I was like the wedding planner who couldn’t get married. I ached for a book deal so badly I could taste it. Having found that my desire to get healthier wasn’t motivating enough, he told me my memoir would only sell if I stopped smoking, toking and drinking. (Never mind that many authors were known lushes, smokers, tokers, sniffers and even heroin shooters.)

For the all-out assault against my bad habits, I avoided bars, parties, smokers, drinkers and druggies — basically my entire social circle of writers and artists. I did weekly talk sessions with him, supplemented by emergency phone calls and emails he’d answer, often five times a day. I was itchy, twitchy, anxious, angry, lonely and lost for months. I cried over nothing. He admitted that I had the worst substance withdrawal he’d seen and that I was his most taxing patient.

“Put everyone you know in two categories,” he said. “If they’re part of the problem, avoid them. If they’re part of the solution, see them more.” He wrote little sayings and directives on the back of business cards he’d hand me, like “Underlying every substance problem I’ve ever seen is a deep depression that feels unbearable.”

“Make your husband hold you for one hour every night without speaking” was one mantra I shared with my mate, who obeyed. I guessed if we couldn’t talk, we couldn’t argue. (Plus, his arms were soothing.) I became dependent on his touch to stay calm.

When I mentioned chewing on gum or veggies all day, my shrink worried. “Your personality is so habit-forming, you could get hooked on carrot sticks,” he told me. “Diet and practice portion control. Don’t overeat or you’ll just do the substance shuffle.”

“What can I have? Water? Tea?” I asked, exhausted from all the quitting.

“You could keep your mouth shut and not put anything in it for hours at a time,” he told me — a choice that, up until then, had never actually occurred to me.

Continually warning me that one could become addicted to anything, he mentioned other patients who’d gone down the rabbit holes of gambling, charity work, church events, shopping, adventure sports, cheating and danger.

“Beware all excitement because it takes you out of yourself and you always have to go back to yourself,” he said. For me, that meant regressing back to 13, before I found the instant gratification Band-Aids of two packs a day of More Menthol Lights to fill in the fear and emptiness.

I was so substance-deprived that a girlfriend emailed me, “Hey let’s get together and have some water.”

Surprisingly, the treatment was wildly successful. After nine months — a poetic time frame — I sold my memoir about a handful of self-destructive relationships I’d quit, titled “Five Men Who Broke My Heart.” Then I sold a sequel about five self-destructive substances I quit called “Lighting Up: How I Stopped Smoking, Drinking and Everything Else I Loved in Life Except Sex,” chronicling our addiction therapy.

A neuroscientist whose book I read argued that since people learn to be addicts, they can learn not to be. Yet based on my own experience, I doubted that an addict could become a nonaddict. Instead, you just switch addictions by refocusing your powerful energy elsewhere. (That’s why Alcoholics Anonymous members often guzzle coffee or donuts and puff cigarettes outside their meetings.)

Publishing books substituted for other dependencies. Hearing an editor say yes was exhilarating; I felt like I’d found God or at least a power higher than nicotine, alcohol, marijuana, gum or soda — substances I haven’t touched in 20 years and no longer desire. Sometimes I missed wanting something so badly it made me crazy.

Last summer I celebrated my 25th wedding anniversary to my screenwriter soul mate. By that time I was the author or co-author of 17 books. Interestingly, a new study revisited those adults who’d taken the 1972 marshmallow experiment and disavowed the original results, showing no difference between those who waited versus the ones who gobbled up the fluffy white treats.

I saw flaws in the premise that delaying gratification was a key to success. As a longtime New York Times editor told a writing class I teach, the writers he’d seen become most famous were the ones who were most obsessed. Someone imbued with passion went further than a brilliant, patient person with no drive.

In my 50s, I kept waking up every day as hyper as the Energizer Bunny, drinking green tea and rushing to my computer to check what my agent, editors or critics had to say.

“Book deals and press are your new cocaine,” my shrink warned by email.

The substitutes seem safer and more benign — except during the months when I can’t make a new clip happen or years when a book deal isn’t forthcoming. Then I feel like I’m still banging on doors at all hours, frazzled and frustrated when they won’t open to give me my fix.

In these cases, I go back to teletherapy for emergency tuneups, a less fraught addiction that involves limits, boundaries and dependence on another human being. Yet I’m still paying him to help reshape the waves of my endless hunger to get what I want: the thrill of nailing the next prize.

Susan Shapiro is the bestselling author of several books her family hates, including “Lighting Up” and “Unhooked.” An award-winning Manhattan writing professor now teaching online, you can follow her on Instagram at @profsue123 or on Twitter at @susanshapironet. This essay is adapted from the upcoming Catapult anthology “Wanting: Women Writing About Desire.”