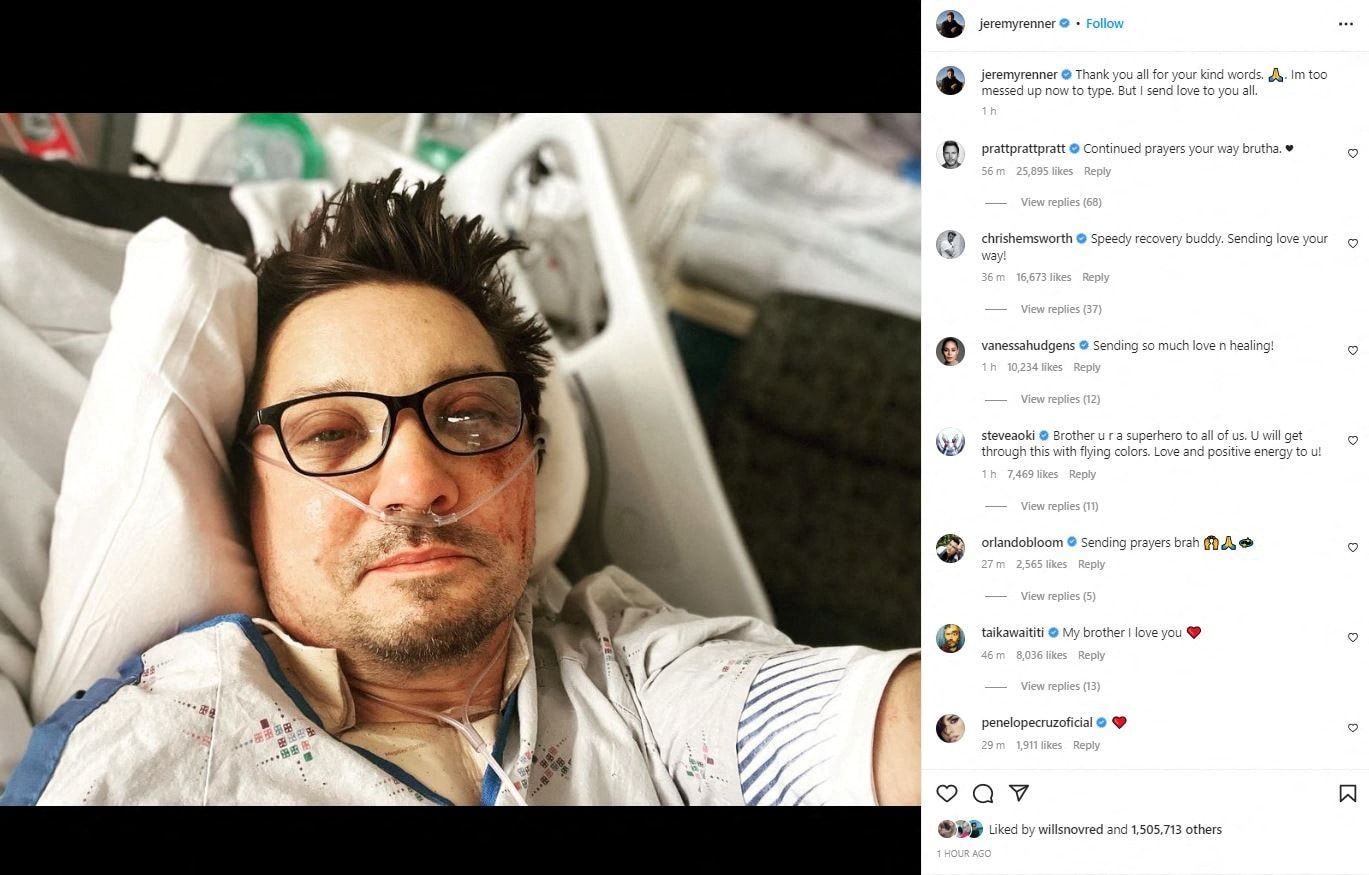 Actor Jeremy Renner said he is “too messed up now to type” in his first Instagram post since authorities said he was run over by his snowplow in Nevada, putting him in critical condition.

“Thank you all for your kind words,” the actor, who plays Hawkeye in Marvel’s Avengers movies, wrote on Tuesday alongside a photograph of him in a hospital bed, his face bruised, with a breathing tube up his nose. “I’m too messed up now to type. But I send love to you all,” he said.

Renner, 51, suffered blunt chest trauma and orthopedic injuries in the Sunday accident near Reno and was in critical condition, representative Sam Mast said in an email. He underwent surgery on Monday, Mast added.

In a Tuesday news conference, Washoe County Sheriff Darin Balaam called it a “tragic accident,” adding that there was no indication of foul play.

Jeremy Renner in ‘critical but stable’ condition after snowplow accident

Balaam said that shortly before the incident, Renner discovered that his personal vehicle, which a family member was driving, was stuck in the deep mountain snow. The star used his PistenBully snowplow, which weighs at least seven tons, to help free the vehicle, Balaam said.

“After successfully towing his vehicle, Mr. Renner got out of the PistenBully to speak to a family member,” Balaam said. “At this point, it started to roll. In an effort to stop it, he attempted to get back into the driver’s seat, and he is run over by the PistenBully.”

Balaam said that “severe winter weather” had delayed responders trying to reach Renner after they received a 911 call around 9 a.m. Sunday reporting an incident involving a pedestrian and a “snowcat,” an extremely large and powerful vehicle.

The night before the accident, which happened in the Mount Rose area near Reno, about 3 feet of snow had fallen, shutting down highways and forcing people to abandon their vehicles. Renner has hailed his cabin near Lake Tahoe as an escape from his intense Hollywood lifestyle.

The sheriff said experts are analyzing the snowcat “for any mechanical failure and why it started to roll.”

Fans and members of the movie industry — including Chris Hemsworth, Orlando Bloom and Penélope Cruz — have flocked to social media in recent days to show support for the two-time Oscar nominee, who starred in “The Hurt Locker” and “The Town,” as well as Marvel’s Avengers franchise.

“Sending wishes to our Mayor for a speedy recovery,” said a post on the official Instagram account of thriller series “Mayor of Kingstown,” in which Renner plays Mike McLusky.