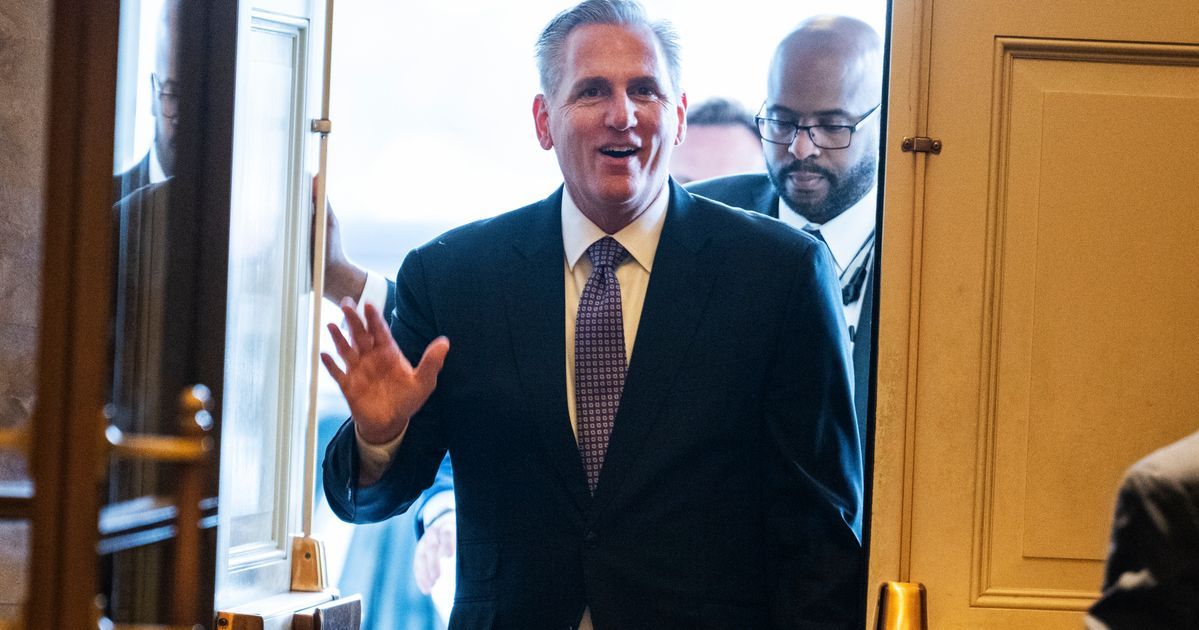 WASHINGTON — Rep. Kevin McCarthy (R-Calif.) failed again Wednesday to win the House speaker’s gavel after coming up short of a majority in the fourth, fifth and sixth votes of this week.

A small but determined faction of Republicans in the Freedom Caucus joined all Democrats in opposing McCarthy, leaving the House in limbo for a second day since the institution can’t function without first electing a speaker.

In a statement on his website Wednesday, former President Donald Trump reiterated his support for McCarthy. The Freedom Caucus is home to Trump’s biggest backers in Congress, but McCarthy’s candidacy has split the group. And Trump’s endorsement apparently didn’t help.

The anti-McCarthy Republicans threw their support behind Rep. Byron Donalds, a Florida Republican serving in his second term, on Wednesday, after having supported Reps. Andy Biggs (R-Ariz.) and Jim Jordan (R-Ohio) on Tuesday.

“For the first time in history there have been two Black Americans placed into the nomination for speaker of the House,” Rep. Chip Roy (R-Texas) said on the floor after announcing he would nominate Donalds.

A bipartisan standing ovation ensued, but Donalds’ nomination made no difference to the ultimate outcome: McCarthy lost, and the House still has no speaker.

McCarthy has added three failed votes to the three from Tuesday, and he could be poised to add more. The House can’t do anything before it elects a speaker besides adjourn; McCarthy has suggested he’s in it for the long haul. He said Wednesday before the first vote that it doesn’t matter who his colleagues put up against him.

“I still have the most votes,” he told reporters. “So we could go through every name in the conference.”

In his remarks nominating McCarthy, Rep. Matthew Gallagher (R-Wis.) acknowledged that Democrats have mocked Republicans for their disarray, but he said they’ve misunderstood the process.

“Sure, it looks messy,” Gallagher said. “Democracy is messy by design.”

Coming into this week, McCarthy knew he lacked the 218 votes to become speaker, but he said Tuesday that his plan was to continue holding votes until his opposition withered. That approach didn’t work, as the anti-McCarthy vote grew from 19 to 20 Republicans over the course of three consecutive ballots that day. And on Wednesday, McCarthy did even worse, as Rep. Victoria Spartz (R-Ind.) voted “present” instead of voting for McCarthy as she had the day before.

Since House Republicans won a mere four-seat majority in the November midterm elections, it only takes five Republican dissenters to foil a vote if Democrats remain united ― which, so far this week, they have.

McCarthy’s loss represents the first time the House failed to elect a speaker on its first ballot in 100 years, but he’s said he’s fine with setting a record for the number of votes needed to secure the position.

The Freedom Caucus members who oppose McCarthy say he would be too soft on President Joe Biden. They want a leader who would refuse to move legislation unless it has nearly unanimous Republican support, presenting a major obstacle for future fights over approving basic government functions, since Democrats control the Senate.

The House adjourned Wednesday with no leader but a possible seventh speaker vote set for Thursday. As he left the Capitol, Biggs told HuffPost he didn’t know what would happen. But Rep. Bob Good (R-Va.), another member of the “Never Kevin” caucus, sounded optimistic.

“I’m confident that we’re going to be able to deny Kevin McCarthy to become speaker, so nothing’s changed.”