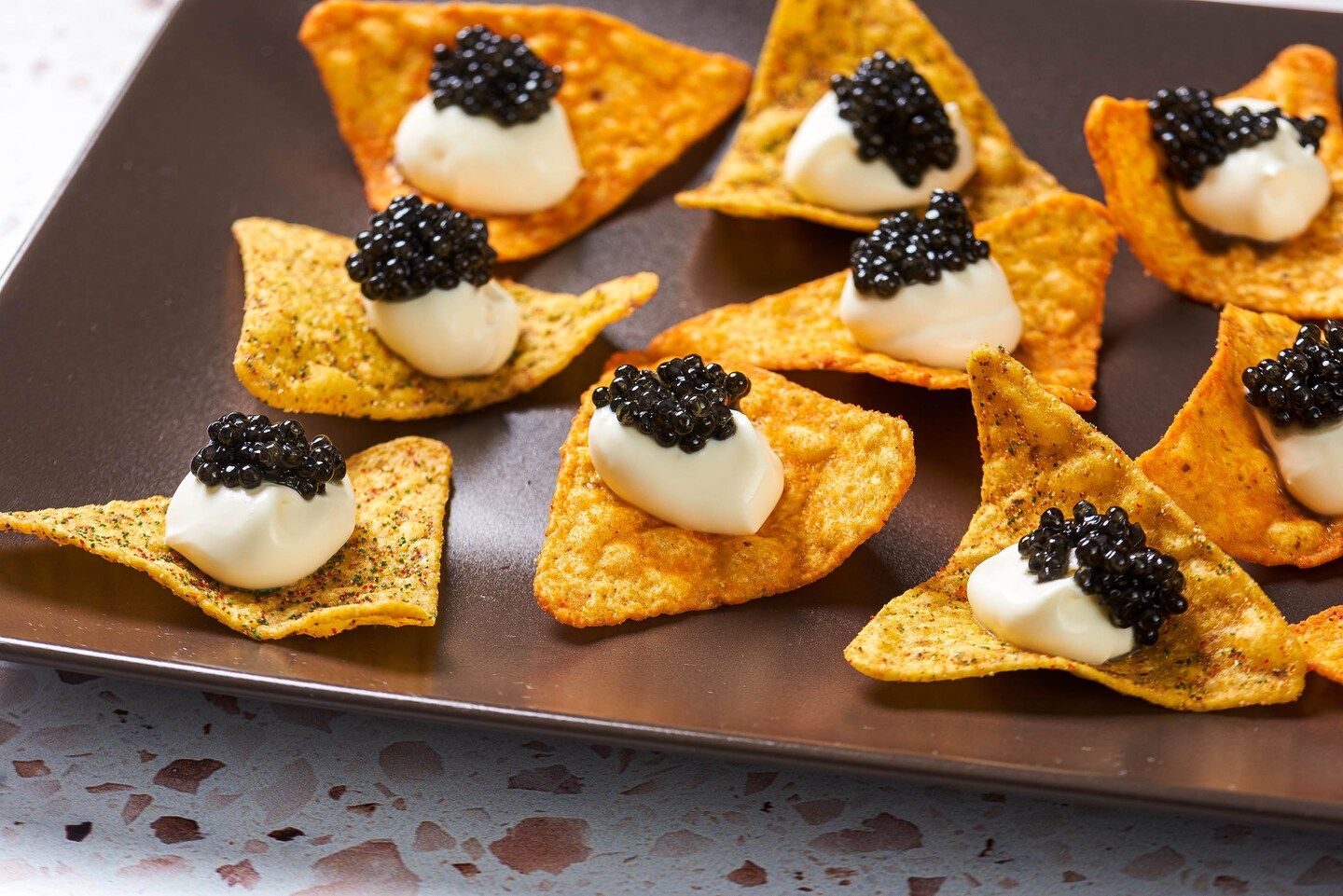 Caviar — something we might imagine belonging to the crystal-and-silver-laden dinner tables of oligarchs, or the cocktail parties of one-percenters — is suddenly popping up far from those rarefied spaces.

Bars are garnishing drinks with it. People are doing caviar bumps, licking the orbs off the backs of their hands like college kids downing salt before tequila shots. On TikTok, 20-somethings in sweatshirts are devouring it at their kitchen counters.

And in one of the most unlikely juxtapositions, they’re dolloping it on Doritos, the junk food famous for leaving a telltale dusting of neon-orange powder on a binge-er’s fingers.

Doritos ketchup and mustard chips are spot on for snacking

The culinary mash-up of high- and lowbrow might be familiar, and caviar-on-everything isn’t even new, but this particular trend can be traced to Danielle Zaslavsky, a TikTok influencer who has become known as the platform’s “caviar queen.” (It helps that her family runs the retailer Marky’s Caviar.) Last month, she posted a video trying out the snack, which she credited to her brother, piling Kaluga imperial gold atop a chip and declaring it “the effing bomb.” The video has been viewed more than 1.3 million times and prompted plenty of others to follow suit, many crediting Zaslavsky for the inspiration.

The proliferation and democratization of caviar probably has a few roots: A currently fashionable aesthetic is one of attainable decadence after a couple of years of deprivation. And there’s the fact that farm-raised caviar has given the category more affordable options, although the good stuff (think osetra and beluga) can still be eye-bogglingly pricey.

Whatever caviar on Doritos says about the cultural and economic moment, the more pressing question is simple: Does it taste good? I asked some top chefs who are no stranger to caviar what they thought of the trend. The consensus was a thumbs down — with an asterisk.

Eric Ripert, the chef and owner of Le Bernardin in New York, said the intense flavor of the chip would probably overwhelm the caviar, which typically has a milder profile. “The Dorito is not going to enhance the caviar,” he said. “The caviar might improve the Dorito, though.” And he noted that one of caviar’s best attributes — its pleasantly sea-like salinity — would be overshadowed by the accompaniment. “It’s salt on salt,” he said.

Robert Wiedmaier, the chef and owner of Marcel’s in Washington, where caviar is on the menu, is of the same mind — particularly if you’re talking about a pricey variety. “What a waste,” he said. “When I’m eating caviar, I want to taste the caviar, not the chemicals or whatever they put on those chips.”

Both, though, took a “you do you” attitude. “If you’re talking about doing it with inexpensive paddlefish with your buddies and it sounds good to you, go right ahead,” Wiedmaier said. “Even if it sounds like bananas on a pizza to me.”

“Taste,” noted Ripert, “is subjective, so if you like it, why not?”

That’s the attitude of Bonnie Morales, the chef and owner of Kachka in Portland, Ore. Long before the trend got legs on social media, Morales was serving a version of it. She said she first offered a bite-size snack of caviar atop a bit of housemade french onion dip with a Cool Ranch Dorito base at the food festival Feast in 2018. It was so popular that she eventually put it on the happy hour menu at her restaurant. She says the sweetness of the corn chip plays well with the saltiness of the caviar, although she calls herself a caviar purist at heart who prefers on her regular menu to serve the delicacy with nothing louder than a simple beurre blanc.

“It’s on the happy hour menu and it’s meant to be more fun, but they do compete so you’re not getting the full expression of the caviar,” she said. “I would rather just have a spoonful, because I like tasting the pure flavor. But we like giving people a chance to enjoy caviar when they wouldn’t have before.”

Morales prefers the Cool Ranch flavor to the traditional nacho-cheese Dorito for a true caviar connoisseur’s reason. When caviar is “off,” it might have a slightly cheesy note, she said, in addition to a fishy flavor (a mushy texture is another giveaway), so the cheesiness of the classic orange chip raises alarms on her palate.

A few colleagues and I tried it ourselves, piling scoops of thick creme fraiche and roe (a white sturgeon from Germany that I picked up at Whole Foods for $50 for an ounce) onto both flavors of chips. The butteriness of the cream tempered the salt of the chip, and if the pops of caviar got a little lost in the Dorito flavors, it didn’t bother any of us. I liked the relative subtlety of the ranch, while recipe developer and editor Olga Massov, who recently wrote about her love for caviar on potato chips with sour cream, enjoyed the hit of savory cheese from the nacho version.

It felt both decadent and fun, like a party trick I would pull for even my most sophisticated guests. And I could imagine it as a friendly gateway appetizer for the caviar-curious who might otherwise be intimidated by the ingredient.

That’s a category of people for whom the chefs had advice — and they all applauded the idea of people trying something new. According to Wiedmaier, if someone thinks they don’t like caviar, it might just be because they haven’t had the good stuff (it’s like wine, he said). Ripert suggests trying caviar on something simpler, like a cracker, to really taste it. As for Morales, she’s rethinking her Dorito snack, pondering more creative iterations now that a version of it has gone viral.

She hadn’t been aware of its sudden popularity on social media until a member of her staff recently alerted her that they had been making more frequent runs to a corner store for Doritos, because it had been “selling like crazy,” apparently fueled by the trend.

“So now, we’ll probably switch it up,” she said. “I don’t want people thinking we got it from TikTok.”