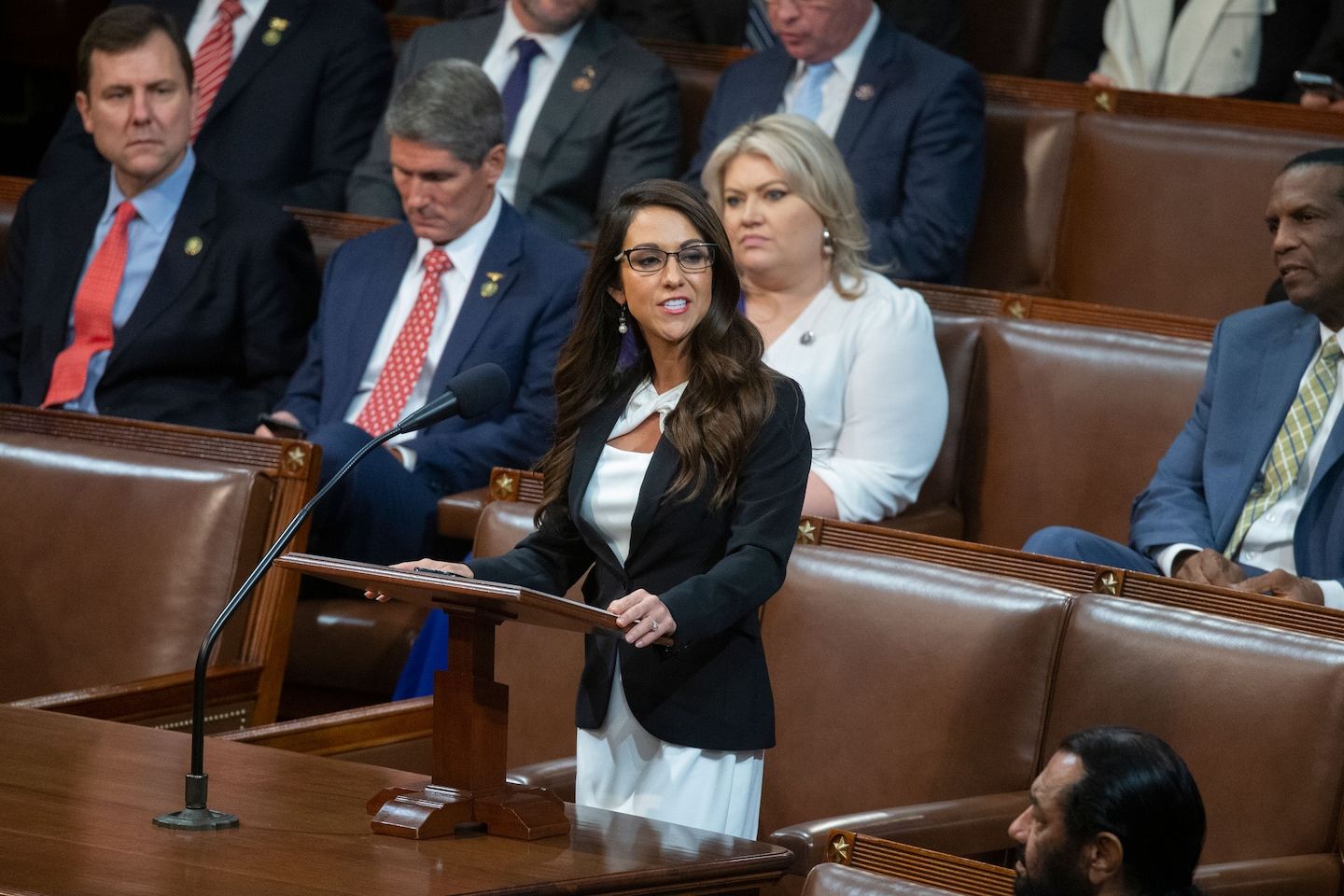 Shortly after House Republican leader Kevin McCarthy lost a vote for speaker for the sixth time in two days, Sean Hannity took a deep breath on Wednesday night and asked Rep. Lauren Boebert (R-Colo.) how much longer the 20 Republicans would continue to block McCarthy’s bid. In doing so, the Fox News host reflected on his guest’s words from earlier in the day on the House floor, when Boebert, who has become a face of the House hard-liners against McCarthy, said former president Donald Trump needed to tell the California Republican that “it’s time to withdraw.”

“Let me turn the tables, congresswoman,” Hannity said to Boebert. “Kevin McCarthy has 202-3 votes. Your side has 20. So, if I’m going to use your words, and your methodology and your math, isn’t it time for you to pack it in and your side to pack it in considering he has over 200 and you have 20?”

But instead of answering the question, Boebert commiserated with the host over what she perceived to be Hannity’s frustration over the Republican implosion this week.

“Sean, I understand the frustration, I promise you,” she said.

Hannity interjected: “I’m not frustrated. You didn’t answer my question.”

As Boebert claimed without evidence that Republicans supporting McCarthy’s bid for speaker were “waiting for Kevin to cave,” an exasperated Hannity pleaded for her to respond to the question.

“I’m frustrated by you not answering a direct question,” he said, before repeating Boebert’s line about how Trump should tell McCarthy to withdraw his name from the speaker vote. Again, Hannity tried to get an answer.

Hannity quickly replied: “Neither do you!”

The contentious back-and-forth between Hannity, one of Trump’s biggest supporters at Fox, and Boebert, a Trump loyalist who enjoyed his support during her primary, came at the end of a second day in which a GOP group of the former president’s hardcore loyalists in the House again blocked McCarthy’s bid during multiple votes, leaving the chamber without a speaker. Even though Trump supported McCarthy’s candidacy for speaker, the 20 Republicans who voted against the GOP House leader were nearly all hardcore Trump loyalists — and 15 of the 20 had received Trump’s endorsement during the primaries.

Among them is Boebert, who took to the House floor Wednesday to emphasize to her colleagues that even Trump’s efforts to influence his supporters that McCarthy should be speaker were not compelling.

“Even having my favorite president call us and tell us we need to knock this off, I think it actually needs to be reversed,” Boebert said. “The president needs to tell Kevin McCarthy that, ‘Sir, you do not have the votes and it’s time to withdraw.’”

Facing a series of humiliating defeats this week, McCarthy is making a fresh round of concessions to the GOP group blocking him from getting the 218 votes needed to become speaker. McCarthy agreed to proposed rule changes that, if adopted, would weaken the position of speaker and ensure a tenuous hold on the job.

On Wednesday night, Hannity appeared flummoxed by the strategy of the 20 Republicans opposing McCarthy, noting how the hard-right group had already nominated Reps. Jim Jordan (R-Ohio) and Byron Donalds (R-Fla.) instead of the GOP leader. Boebert claimed the group was offering “a menu of options” for speaker because McCarthy’s “commitment to America is not as strong as I would like it to be.”

While Boebert noted to Hannity that she agreed with McCarthy’s agenda policies, including border security, energy independence and debt reduction, she said, “I do not trust Kevin McCarthy at this point to deliver on this promises.” So, Hannity bluntly asked who her final choice for speaker would be and if the GOP group against McCarthy would stop their blockade.

The response led Hannity to utter a question he likely didn’t anticipate asking: “Is this a game show?”

“Like we’re going to pick Jim Jordan one day, Donalds another day, Trump the next day?” he said.

Later, Hannity again pressed Boebert about whether the GOP opposition group had a firm candidate to oppose McCarthy. When she did not give a name, Hannity, looking worn out from the exchange, let out a response worthy of his exhaustion: “Oh, gosh.”

Hannity noted that while he did not disagree with Boebert on many topics, he said he could not understand why she would support what he called “a double standard” from the group by not withdrawing their opposition to McCarthy.

“Look, it’s obvious by tonight’s motion to adjourn that Kevin McCarthy and his supporters have voter fatigue,” Boebert responded. “And I’m here for it.”

By the end, Hannity noted that he was talking in circles with Boebert.

“I asked you a simple question, congresswoman,” Hannity told her, with the host adding that he felt like he was “getting an answer from a liberal.”

After Boebert repeated she was not going to support McCarthy under any circumstance, a defeated Hannity spelled out his disappointment: “I didn’t get the answers I wanted.”