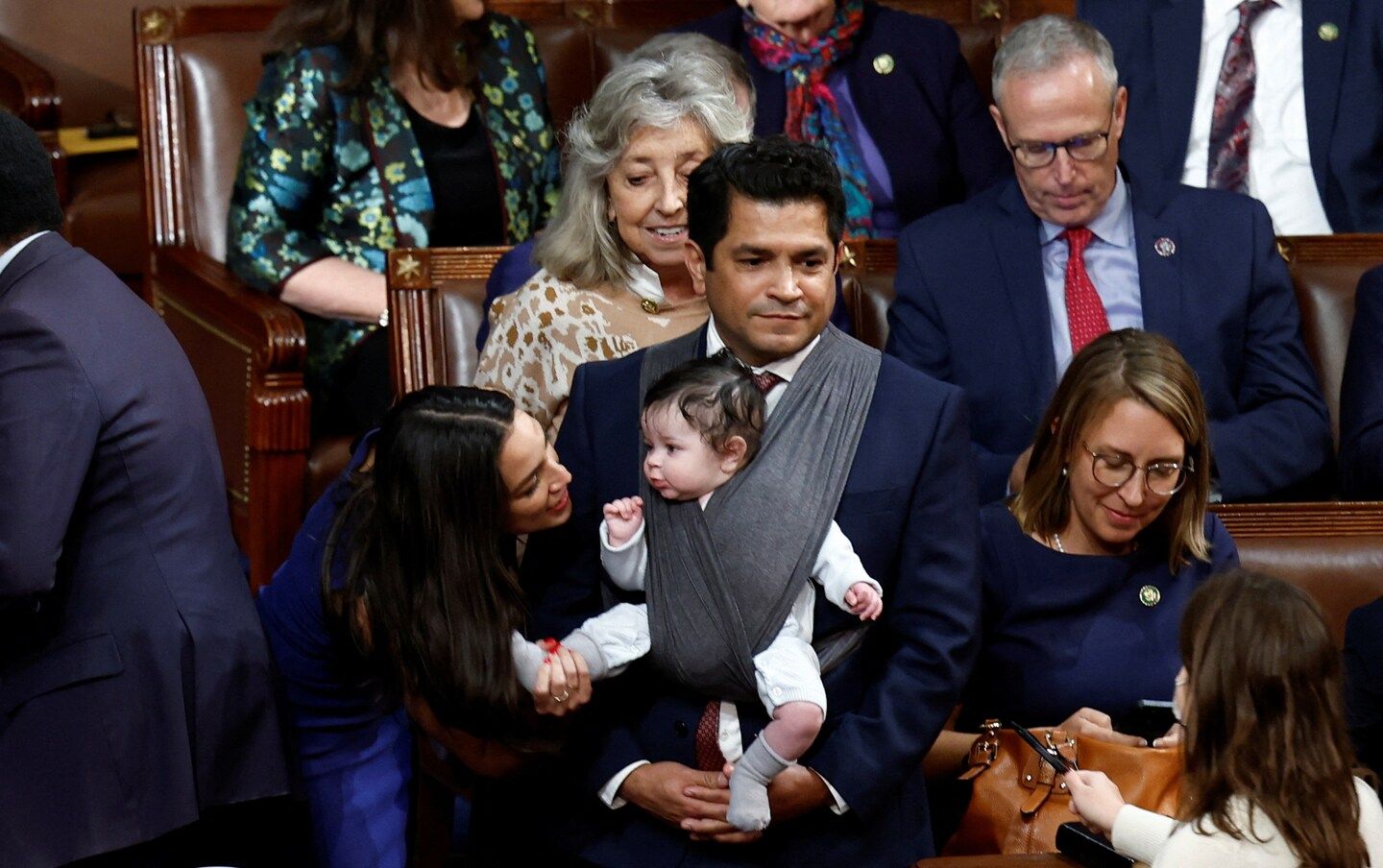 The House floor was full of whiny, unruly crybabies this week.

And then there were the children: Adorable infants like Hodge, the 4-month-old son of Jimmy Gomez (D-Calif.). Well-behaved kids, the only people willing to sit anywhere near George Santos (R-N.Y.). Exhausted youngsters, like the twin sons of Kevin Mullin (D-Calif.), who fell sound asleep as their father waited for yet another vote. Bored teenagers who were nonetheless still less recalcitrant than some of the adults in the room.

“Members have loved it because a lot of them are parents and even grandparents,” said Gomez Friday. “They just love seeing a baby, and it doesn’t hurt that a lot of people think Hodge is super cute.” The California Democrat became a social media star this week while tweeting his journey as caregiver and lawmaker caught in the mind-numbing yet riveting quest to name a speaker for the 118th Congress.

Gomez had 14 family members in Washington — the first time they were all together since the pandemic — and a slate of plans including a big family photo for his swearing in. But first, a speaker had to be elected.

Hodge spent Tuesday in the House floor and cloakroom, requiring two bottle feedings and “multiple diaper changes.” On Wednesday morning, Gomez took his firstborn to visit nearby offices and then back to the House floor. His family toured the Air and Space Museum and the White House. On Thursday, his relatives flew home — including his wife, Mary Hodge, a deputy mayor of Los Angeles — leaving Gomez and his son in Washington.

“We believe in the idea that my wife or any woman should not be the default parent, automatically the default caregiver,” he said. “My job is a little bit more flexible since I am the boss of my office. I answer to myself and to the people of the 34th Congressional District. So it was easier for me to keep him.” (Well, not that easy: He shares a small D.C. apartment with Darren Soto (D-Fla.) that barely fits all the baby gear.)

Traditionally, members of Congress spend the first day of a new term celebrating with loved ones: The highlight is usually that swearing-in photo. The senators did so this week with little fanfare. The House was, well, a hot mess of uncertainty and dashed plans.

Two well-known fathers, Rev. Jesse Jackson and Sen. Robert Menendez (D-N.J.), were stuck in the House gallery for hours Tuesday, hoping to see their sons sworn in. “I feel bad for the relatives, the spouses, partners and family members who came to town for new members,” Pete Aguilar (D-Calif.) said in a news conference Wednesday.

Julia Brownley (D-Calif.) was excited to have her first granddaughter, 9-month-old Tibby, in the nation’s capital for her swearing-in. Tibby spent part of Tuesday on the House floor on her grandmother’s lap. She was in and out of the congresswoman’s office Wednesday, hoping for a swift resolution. Alas, it was not to be.

Brownley, like most members, tried to find a silver lining: “I am proud that an historic number of women will serve in this Congress, which will undoubtedly inspire countless young women and future leaders, like my granddaughter, Tibby.”

Joaquin Castro (D-Tex.) brought his wife and three kids, including 8-month-old daughter Anna Valentina, from San Antonio to Washington, a chance for them to witness history. All three were on the House floor Tuesday.

On Wednesday, his wife and older kids toured the White House while he brought the baby to the floor. (At one point, Gomez tweeted a photo of his son and Anna side by side: “At this rate @JoaquinCastrotx’s daughter Anna Valentina and Hodge will be going to prom! #CongressCuties #118thCongress”)

Perspective: The House speaker vote is the best thing on TV right now

“It adds to the chaos because the Capitol isn’t really built for kids,” Castro said after a vote on Friday. “It’s hard to get around with a stroller on the floor.” But seeing all the children was great, he added: “It lightened everything up. All the kids did really well. No one was crying for an hour straight.” He paused and clarified, “I can’t vouch for the adults.”

Another takeaway: Castro discovered the men’s members bathroom doesn’t have a changing station, something he intends to remedy. The larger issue is normalizing seeing fathers taking care of their work and their children. (We’ve seen more dads this week in part because only about a quarter of House members are female.)

Having children present, Gomez said, has been a reminder to his colleagues of what they’re fighting for. He’s thinking about laws that make sense for working families, making it easier for dads and moms to take care of their kids.

Gomez said he’s getting a lot of attention, but not necessarily for the right reason. “People are saying, ‘Oh, that’s awesome. You brought your kid to work.’ I’m a guy. I get praised. But if a woman takes their kid to work, they’ll go, ‘Oh, you took the kid to work.’ It’s a different connotation,” he said.

“For women to do it, it means that they’re not as dedicated as a man, but if a man takes a kid to work, it seems like they’re a better parent, which I think is something that we have to push back against.” That’s why he’s for paid family leave for mothers and fathers.

One more thing: Hodge is already way too comfortable on the House floor. “He’ll let you know if he doesn’t like a position or if he’s getting tired. But he likes the cameras,” Gomez said. Sounds like a future politician to us.

Paul Kane contributed to this report.