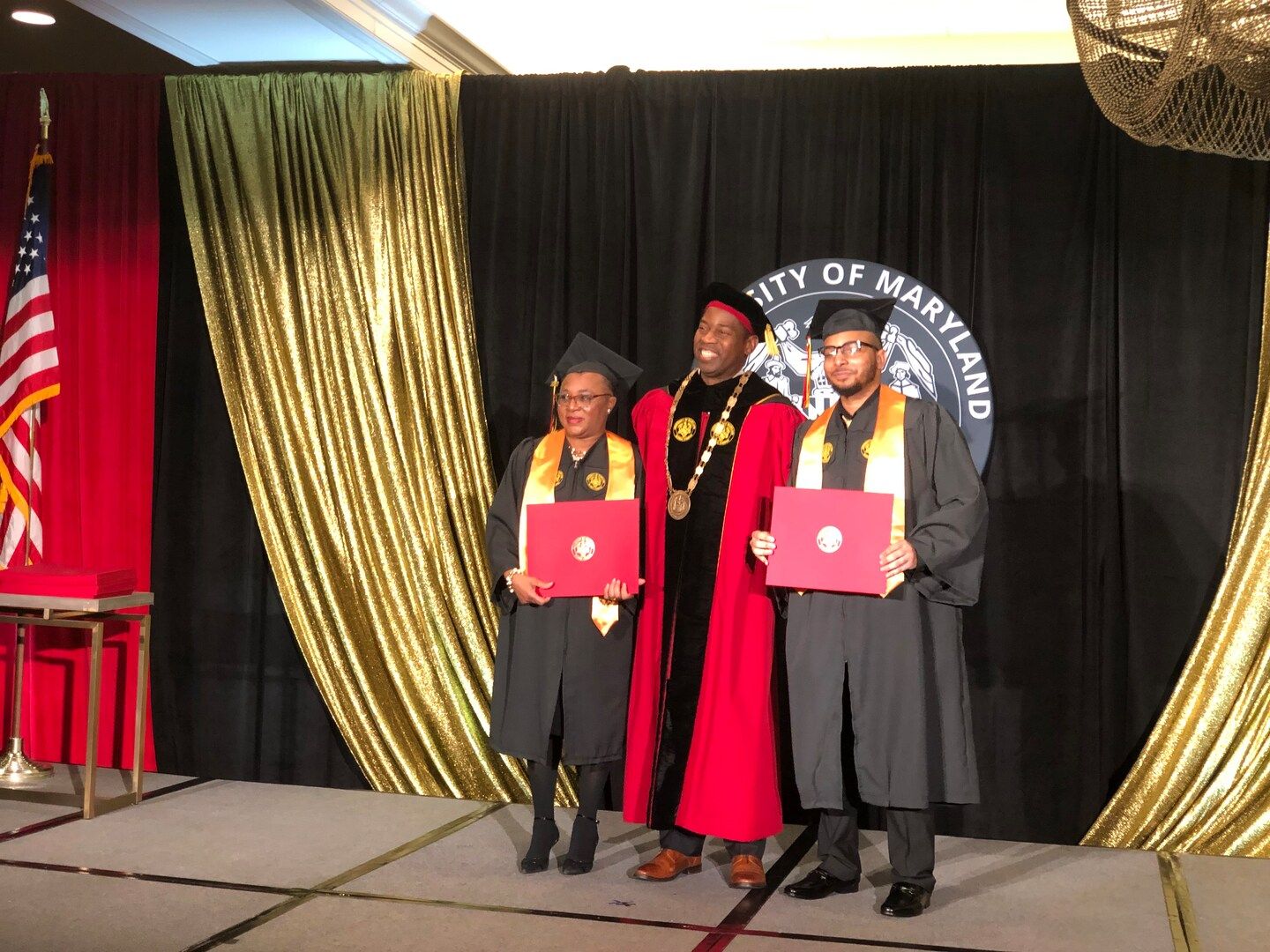 Immanuel Patton has a vivid memory of making a promise to his mother while she was driving him to kindergarten one day in Linthicum, Md., near Baltimore.

“My mom was always talking about other people getting college degrees, and I told her that I’d make sure she got a degree at the same time I got mine,” recalled Patton, now 23.

“It’s something I never forgot because I’m a man of my word,” he said.

On Dec. 16, 2022 — almost two decades later — Patton lived up to that vow and walked with his mom Carolyn Patton as they received degrees together from the University of Maryland Global Campus in Adelphi, Md.

“It was a long journey and a dream come true,” said Carolyn, 63, who shares a home with Immanuel in Glen Burnie, Md.

“My son encouraged me the entire way and wouldn’t let me give up on days when it seemed like too much and I wanted to stop,” she said.

“It was such a huge reward to see the smile on my mother’s face,” Immanuel said. “I always knew that she could do it, and it was a great way to end 2022.”

Carolyn Patton, a single mom of two, said she’d always hoped to earn a bachelor’s degree, but life got in the way.

“I thought there would be a lot of financial hardship to go to school while working full time,” she said, noting that she tried twice to complete a bachelor’s degree after she earned junior college associate degrees in electronics technology and general studies when she was younger.

She has worked as a coordinator of student services at Anne Arundel Community College in Arnold, Md., since 2001, and said she always encouraged her son and his older sister, Arleaver Chemalle Patton, to pursue a college education after high school.

Like his mom, Immanuel earned two associate degrees from a junior college: one in general studies and one in business management. Then in fall 2020, he decided to pursue a bachelor’s degree online at the University of Maryland Global Campus during the coronavirus pandemic.

“That’s when I told my mom, ‘If I’m going to do this, then you need to sign up, too,’” Immanuel recalled.

“I’d brought it up several times over the years, especially when my sister got her bachelor’s degree,” he said. “I told my mom, ‘It’s almost time. We can get this done together.’”

“When my son says something, nine times out of 10, it never fails,” Carolyn added. “Ever since he was little, riding in his car seat, we’ve had deep conversations. He never let go of that promise to go to school with me.”

For two years, mother and son offered each other encouragement and help with study questions in the evenings after dinner, Carolyn said.

“He’d have his laptop in one part of the house, and I’d be in my space with mine,” she said. “If one of us needed help with something, we’d just go check in with each other.”

After working an eight-hour shift, it was often hard for her to stay focused, Carolyn said.

“I have to admit that I had a few meltdowns,” she said. “Sometimes, it just seemed too overwhelming, and I told Immanuel that I wanted to quit. But he wouldn’t hear of it.”

“I focused on tough love and told her she’d come too far,” Immanuel said. “We had to focus on what the mission was and just take it one semester at a time.”

For Carolyn, who came to Maryland from Mississippi on a one-way bus ticket in 1989, sticking with her studies was like taking another leap of faith, she said.

“I moved here with my daughter and stayed with a relative for 15 months until one day I caught a bus to a community college to see what else I could do for myself,” she said. “I wanted a better life.”

“I got those associate degrees and Immanuel felt I could do it again,” she added. “He kept saying, ‘Mama, I want the best for you.’”

In return, Carolyn said she helped Immanuel through a rough patch, when his grade-point average dropped to 1.0.

“I told him he had to keep a 2.0, and he turned it around with help from some study coaches and advisers,” she said. “I was so proud of him when he started getting A’s.”

On nights when she didn’t feel like reading another paragraph or memorizing another fact sheet, Carolyn said she often thought back to the times her son was late for class at the private elementary school she’d spent much of her savings on when he was growing up.

“People probably wondered if he was going to succeed because he was always the last one there in the morning and the last one to get picked up because of my job,” she said. “But we made it. So I knew I couldn’t let him down. I had to keep trying.”

At their graduation walk last month, there were plenty of happy tears when she and her son received their diplomas, Carolyn said. Her 82-year-old mother, Arleaver Patton, was among those beaming in the audience.

“We did it! And it was an incredible bonding experience to have with my son,” Carolyn said. “We kept pressing forward and learned that nothing could stop us except ourselves.”

UMGC President Gregory Fowler said he enjoyed posing for pictures with the Pattons after the ceremony.

“We are inspired by Immanuel’s commitment to support his mother — for him to make that pledge at such a young age is truly remarkable,” he said. “That we have helped him fulfill his childhood promise to Carolyn makes us all extremely proud.”

Carolyn said she doesn’t want to start a new career, but she hopes her bachelor’s degree will help to enhance her pay at work. As for Immanuel, he’s now looking for a job, with a valuable lesson learned:

“Don’t let anything get you off track from what you really want in life,” he said. “I’ve always wanted this for my mom. And I’ll be happy forever that she took me up on it.”