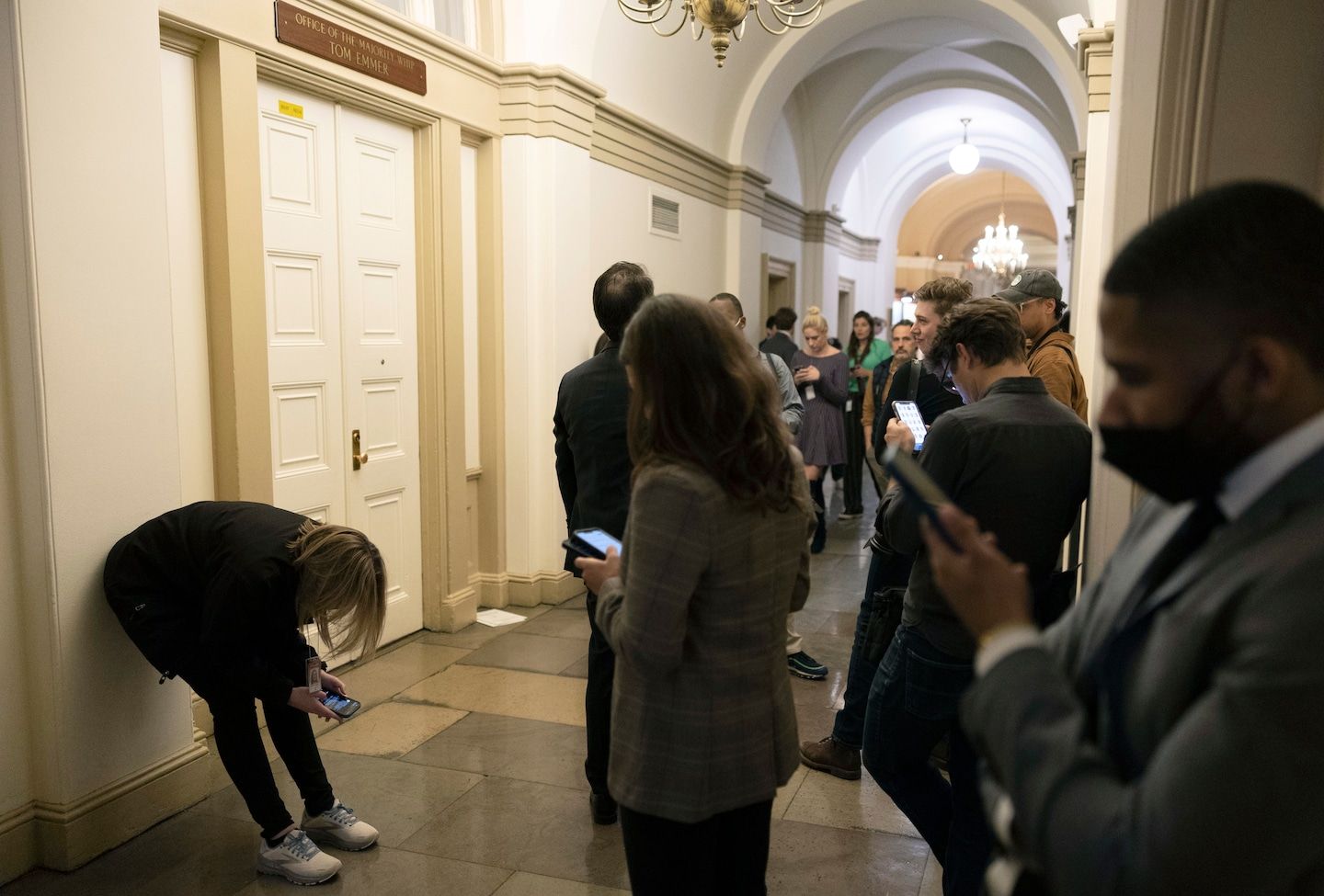 There was still no leader in the House, but there were plenty of swarms. Reporters roosted like starlings outside key Republican offices, pecking away on smartphones, starving for any nugget of news on the third consecutive day of the chamber’s paralysis.

“Congressman, is there a deal?”

The Ohio Republican dipped an unjacketed shoulder through the coagulating throng and attempted to push through. “It’s moving in a good way,” Jordan muttered, without stopping. A photographer squatted in the congressman’s path, firing off shots, only to be toppled onto the marble floor by a stray reporter caught up in the pursuing mob.

Jordan high-tailed it down a flight of stairs and into the safety of the House chamber, where reporters may not venture, leaving no crumbs of news in his wake. Then somebody spotted Chip Roy, and then they were all chasing him down some stairs until the Texas Republican doubled back, causing the reporters to stumble over themselves as they reversed course. All that was missing was the soundtrack of “Yakety Sax.”

A story that began for journalists with peak drama on Tuesday, as a band of rogue conservative lawmakers blocked Republican leader Kevin McCarthy’s bid to become House speaker, had morphed by the end of the week into an endless, dizzying stalemate that felt something like a Samuel Beckett reboot of “Groundhog Day” for its media chroniclers.

Yet even as the House churned through five more failed votes Thursday — nearly identical to the six that had preceded them — the adrenalized buzz had not worn off for the very particular breed of reporters who cover Capitol Hill.

“It’s a privilege,” said Michael Jones, who has covered Congress for the past two years for his fledgling politics newsletter Supercreator. “This is historic. The last time this happened was in 1923,” when it took nine ballots to elect a speaker. “It’s amazing to be here, really.”

“It’s exciting because this is not normal,” said Tia Mitchell, Washington correspondent for the Atlanta Journal-Constitution. “We’re covering events that are going to be discussed and debated for years to come. To me that’s an honor.”

The House is typically the most freewheeling environment in official Washington, a mixed zone in which no one needs an appointment or an introduction to snag a leading lawmaker for a few comments. So the political chaos on the floor was mirrored in the corridors, where reporters trailed legislators like rolling human tumbleweeds.

“You can connect with people here,” said Jonathan Martin, a columnist for Politico. “You can see the body language, the facial expressions. You can see and hear the sighs and the grimaces.”

The concentration of members within the House’s relatively tight confines produced rolling scrums all day long, as members walked and talked with reporters. Staff members struggled to enforce some basic rules of decorum (don’t get between a member and his security detail) and fire codes (no sitting on stairways) that journalists were either disregarding or oblivious to. “There are a lot of new people here who don’t know the basics,” grumbled one staffer.

“I saw your shutter click,” another staffer chided a reporter, who insisted she hadn’t violated a no-photos ban outside the Speakers Lobby. They bickered, and the staffer huffed away.

The biggest attractions for reporters seemed to be hard line Republican holdouts like Lauren Boebert, as well as dealmakers trying to build support for McCarthy, such as Emmer and Patrick McHenry (R-N.C.). Democrats were generally ignored.

McCarthy himself, surrounded by security, tended to brush past reporters as he ducked in and out of meeting rooms.

His reticence, though, left an opening for lesser-known lawmakers in chattier moods.

As a reporter stood idly in the corridor, a bearded, solidly built man approached and began offering his unsolicited thoughts on the stalled proceedings. He was Derrick Van Orden, a newly elected Republican representative from Wisconsin who came ready with an elaborate thesis on the 20 or so Republicans who have refused to support McCarthy, dividing the rebels into sub-groups.

“The vast majority of the folks who are holding up the process really want to get on with the people’s business,” he concluded.

As night fell, the House held its 11th ballot of the week and its last for the day. The reporters by then were beginning to lose the thread.

As the House adjourned around 8 p.m. and the chamber emptied, reporters and lawmakers stood in the halls discussing the prospects for another day of paralysis and frustration. As they did, a shorter figure moved to the periphery of the conversation.

“Well, we’ll see you all again tomorrow,” Nancy Pelosi interjected cheerfully. The reporters looked up. The San Francisco Democrat, the last Speaker of the House, was smiling mischievously. “Are you ready for some more fun?”