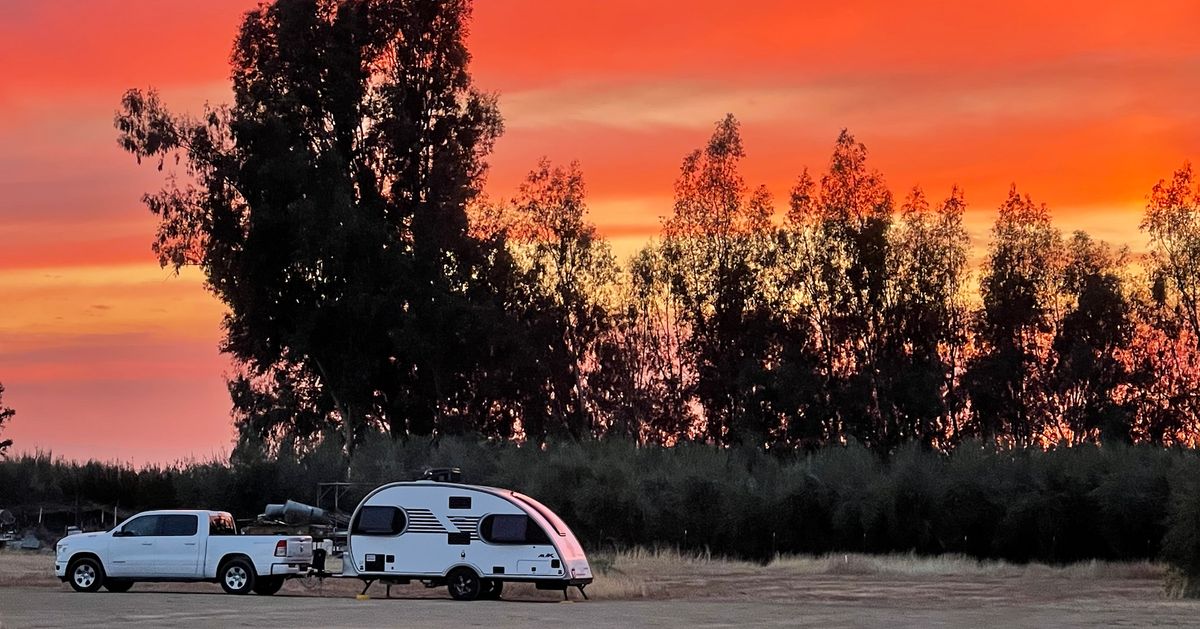 “Hopefully, the pig is friendly,” I muttered to my wife as we started walking toward the outdoor bar area. We were deep in Texas and staying at an RV site that boasts award-winning pulled pork, apple pie fries, and a giant pig named Minnie Pearl. She was, indeed, friendly and loved being petted. She was also surprisingly chatty for a pig.

As two lesbians traveling full time in an RV, there are places where we fear our gayness may stir an angry reaction from people who disagree with our “lifestyle.” When that happens, we walk a few feet apart and exude a “we’re just friends” vibe. This was one of those times.

Nearing the bar, we distanced ourselves and acted casual. We had our heads on a swivel, taking in our surroundings like covert operatives in enemy territory. We spotted two women eyeing us without even trying to be discreet. “This should be interesting,” I murmured under my breath.

To our surprise, as we got closer, the women waved and welcomed us to the bar as if we were old friends. They invited us to grab a beer and sit at a neighboring table. We were shocked and relieved because the last thing we expected to see in a small-town Texas bar was another lesbian couple. You never know what you’ll find when you live on the road.

When we decided to sell everything and move into an RV, we were looking for an unencumbered life. We both retired early from stressful careers in health care and longed for a relaxed pace untethered from responsibility. Not a week goes by that we don’t acknowledge how lucky and privileged we are to have been able to choose to retire earlier than most. We’ve been on the road for more than a year and have had some unique and incredible experiences.

Recently, at a campground in Grand Canyon National Park, we had a once-in-a-lifetime experience. My partner was planning to do a one-day, 26-mile, rim-to-rim hike, and we’d arrived a couple of days early to enjoy the area before her grueling adventure. We were awakened on our first morning by a strange, almost harmonic sound.

Scrambling out of bed, I threw on some clothes and opened the shades of our camper to look around. “Holy shit,” I shouted. “There are two elk with huge racks right outside.”

The bull elk were about 50 feet away, and a few females were grazing farther out. I fumbled with my phone, trying to bring up the camera without the help of my glasses, and stumbled out of our teardrop trailer to take a video of the unfolding scene.

The bulls were bugling and sounded oddly similar to whales under the sea. The nearby cow elk were bleating in response. The bulls began charging each other, slamming their expansive racks together, stopping only when the females cried. These beasts were so close that we could see the mist from their breath swirling around their snouts as they bugled. The rising sun filtering through the trees added to the magnificent display of nature.

We envisioned epic moments like this when we decided to bail on the conventional American dream to live a nomadic life of adventure. We romanticized giving up our jobs, home, and the semblance of security we’d previously taken for granted. We idealized every part of full-time RV living, giving little thought to the potential drawbacks.

We hadn’t envisioned dealing with an overflowing septic tank at a random dump station that caused waste from our black tank to spill all over the ground. We never considered handling severe winds whipping our trailer side to side as we drove through The Gorge in Oregon. And we didn’t spend much time thinking about how we might be perceived in the conservative areas of our country.

Before setting off on our journey, we lived in a liberal western Washington city that celebrated diversity as though they had invented it. Pride flags and Black Lives Matter posters are displayed in businesses and homes throughout our town. Being a lesbian couple in that environment lulled me into believing that being gay was widely accepted and supported. I should have known better, but I was too busy being idealistic.

There is little diversity within the RV and tent camping communities. We don’t see many people of color and rarely run into gay couples. We’ve observed that conservative, straight, white people primarily enjoy RVing, and we often sense the eyes of judgment and disdain when it registers with our campground neighbors that we are gay.

It’s not uncommon to see RVs flying Trump flags, and we once observed a camper adorned with a life-size window decal of Trump’s smiling face. It’s commonplace to hear disparaging comments about liberals and even more familiar to watch people trying to avoid eye contact with us. We quickly learned to be as stealthy as possible.

I can’t imagine the luxury of enjoying RV life as a straight couple. I wonder what it would feel like to go for an after-dinner walk through a campground or RV park and feel like you fit in. The sense of belonging may be so pedestrian to straight couples that they are unaware of their freedom.

It didn’t occur to me when we embarked on this journey that I might feel the need to hide who I am again. It took me nearly 50 years to come out of the closet, so it’s disheartening to feel my safety is in jeopardy unless I closet my gayness. We’ve seen too many YouTube videos of gays being physically attacked to consider holding hands during our evening walks when camped in the South.

A couple of months into our grand adventure, I started feeling cynical whenever we pulled into an RV park. I’d judge people based on their license plates, deciding in advance who would and wouldn’t be accepting of us. I assumed Texans would be judgmental and unwelcoming even before we rolled into the Longhorn State. This is why our experience at The Lone Star Bar in Fredericksburg was such a surprise.

We ended up sitting with the lesbian couple who welcomed us to the bar and had a great time. They were regulars and relayed the story of how a local woman came to own the bar. We heard how each of them ended up in Texas and why they decided to stay. And they encouraged us to introduce ourselves to the resident (giant) pig, Minnie Pearl.

Over beers, pulled pork, and apple pie fries (reason alone to visit the Lone Star), we swapped stories with our new friends and felt at ease and connected. Late that night, after a unique moment with Minnie Pearl, we wandered back to our trailer with full bellies and happy hearts.

As we climbed into bed, we talked about the irony of the situation and how our preconceived beliefs were shattered over caramel-drizzled apples that were cut and fried to resemble French fries. We acknowledged our tendency to judge others we think will judge us.

Yes, queer people are still in danger in this country just because of who they are. Frighteningly, with “Don’t Say Gay” bills being passed in several states, rampant anti-trans sentiment, and more new threats popping up regularly, it often feels like we’re going backward. But this is a big country with good people everywhere.

We know we have to be careful ― and we are. But we’ve also been pleasantly surprised on our journey, and we’re challenging ourselves to be more fluid in our thinking and to foster an openness that waits and watches before making judgments based on nothing more than a license plate on the back of an RV.

Kim Kelly Stamp is a writer, essayist, and espresso enthusiast. She travels with her wife around the country in a 21-foot teardrop trailer. You can follow her on Twitter @KimKellyWrites and read more of her work at medium.com/@kimkellywrites.