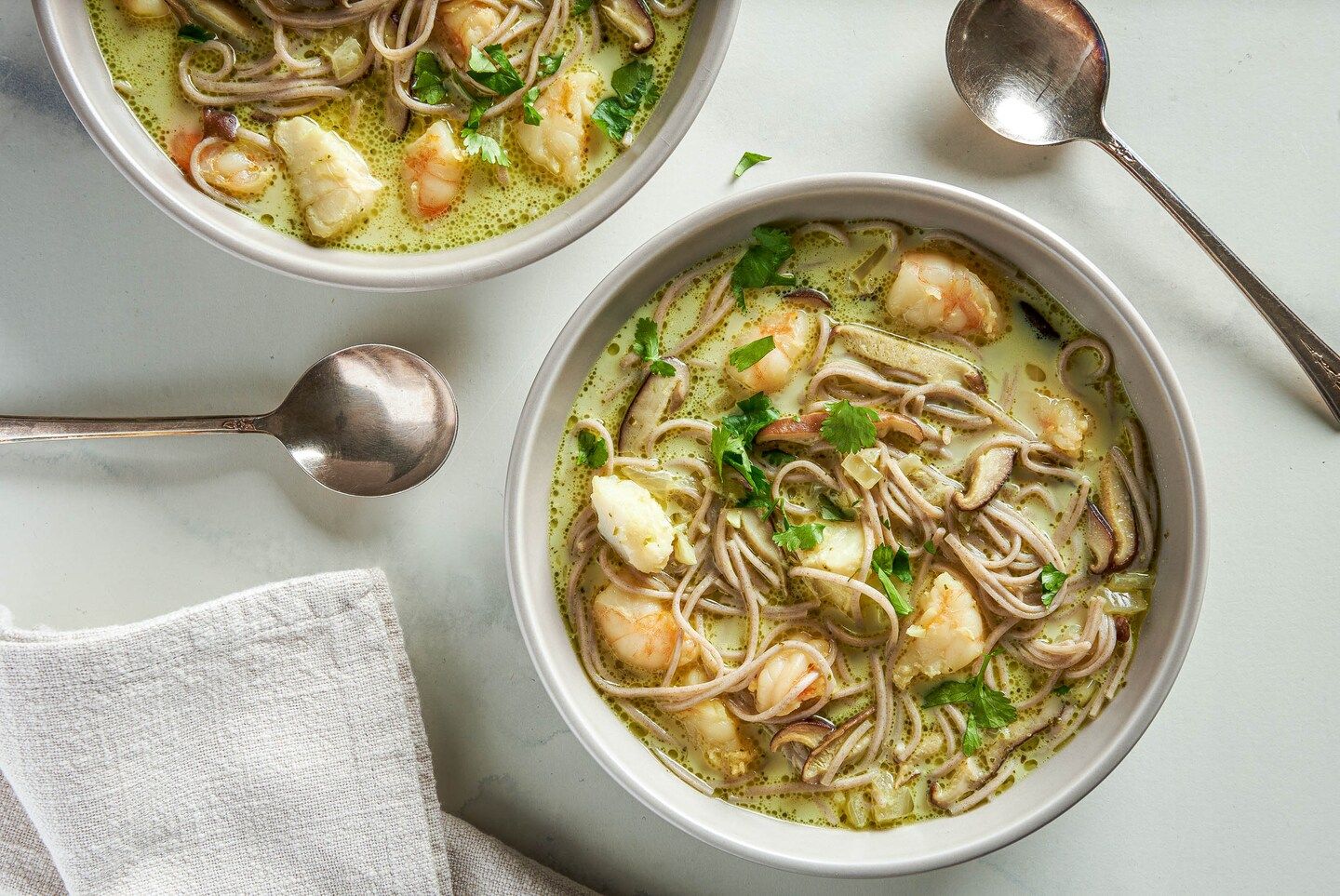 Servings:6 (makes about 10 cups without the noodles)

Servings:6 (makes about 10 cups without the noodles)

Can I tell you about my mom?

I want to tell you about a soup, too, But the soup is important only because my mom, the most un-momlike of moms, died a few weeks before I made it.

My sister-in-law called her “the mom who fell to earth.” She was born before the autism spectrum was a thing; she just realized, early on, that her mind worked differently from other people’s. She told me stories of figuring out, by rote, how other people expressed emotions, and how to respond appropriately.

It didn’t always work. When I was a kid and experienced the inevitable kid tragedies, she was always there with some godforsaken constructive suggestion. It was maddening. And since she could remember, verbatim, everything she read, her suggestions often took the form of an obscure poem.

I knew, even when I was young, that my mother had some kind of special quality that I didn’t quite understand, and definitely didn’t share. It would have been intimidating if she had ever wielded it as a cudgel, but she never did.

She had deliberately shaped the kind of person she wanted to be, and she made it clear to me and my brothers that anyone could. “Life is theater,” she used to say. What you think and feel don’t matter much. You become the sum of what you say and do, and you have control over those. You get to decide. It wasn’t an idea I fully grasped as a kid, but it took hold with a vengeance when I was an adult.

Sometimes, though, what you feel bleeds through. Like when someone you love dies.

My mom had been ill for a long time, and at the end of October I got a call from her caregiver that her condition had deteriorated suddenly and markedly. My brother Aaron was on a plane to Miami Beach two days later, and my husband, Kevin, and I were a couple days behind him. Aaron found her very debilitated but with cognitive faculties intact. They talked about poetry. Kevin and I were too late.

Most of us, sooner or later, experience the death of a parent; it’s an ordinary event. And many of us know the kind of mixed-up grief, edged with relief, that comes when the misery of someone very ill finally ends. There’s probably an Inuit word for it.

But grief defies its own ordinariness, and it sets about taking over your life. It becomes your cognitive wallpaper, there when you’re not actively thinking about something else. It catches you off-guard at weird and inconvenient moments — in the elevator, at the bank. I got scatterbrained and stupid; I fumbled little things like my schedule and my shopping list. I kept thinking of things I wanted to ask her. And in a sign that things had really gone haywire, I stopped thinking about food.

Okay, I didn’t completely stop thinking about food. I stopped thinking about it as much as I usually do, which is basically all the time. I was still cooking, but it was things Kevin and I could make on auto-dinner. A pantry pasta sauce, a roast chicken, chili.

All my adult life, I’ve cooked most every day. My mother did, too. She didn’t make a fuss about it, she didn’t even talk about it, she just put good-tasting food on the table every night. She didn’t teach me how to do it, and she didn’t invite me — or anyone else — to participate. She cooked solo. I internalized both the idea that cooking was an ordinary daily activity and that it was something you did alone. It took Kevin many years of patient, gradual encroachment to show me that people could cook collaboratively, and like it.

I was grateful for the collaboration in the wake of my mom’s death, when meals were an afterthought and Kevin and I shared what little work went into what we ate. And one of the first signs that grief was waning was when I found myself, one day just after breakfast, thinking about dinner.

“I want to find a fish market,” I told Kevin. “I want a Florida fish, and I want to cook something new with it.” We found a market in a Cuban neighborhood in Miami, but my pathetic Spanishlessness wasn’t a problem; I just pointed to one of the shiny, clear-eyed yellowtail snappers nestled in ice. Oh, and some of those shrimp over there, too, please.

I made stock with the fish rack, and turned it all into a soup with coconut milk, green curry paste and soba noodles. That’s not original or even imaginative. It’s a flavor combination as old as the hills — as long as the hills are somewhere in Southeast Asia. But it marked a return to the daily routine. The ordinary daily routine.

It’s a good soup, honest. But the night we ate it, seasoned with re-entry, I was overwhelmed with gratitude. Not for the soup — although it really is a good soup — but for a life where good soup is an ordinary daily joy.

My mom would have loved that soup. But she also would have wondered why I’m making such a bloody fuss about it.

Make Ahead: The soba noodles can be cooked and refrigerated up to 3 days in advance.

Storage: Refrigerate for up to 3 days; gently reheat over medium-low heat. The soup will separate as it sits; this is fine — just stir it to recombine.

Where to Buy: Thai green curry paste and soba noodles can be found at well-stocked supermarkets, Asian markets and online.

NOTE: If you’re not planning to eat all of the soup at once, you may want to reserve the noodles and soup separately. If left in the soup, the noodles will soak up the broth and become gummy.

Set a medium pot with water over high heat and bring to a boil. Add the soba noodles and cook according to package instructions, until al dente. Remove from the heat, drain and rinse under cold running water until no longer hot. Drain and set aside; you should have about 8 ounces of cooked noodles.

Add the stock, coconut milk and curry paste and bring to a boil. Decrease the heat so the soup is simmering, taste and season to taste with salt, followed by the lime juice and maple syrup. Add the fish and shrimp and simmer until the fish is just cooked through, about 8 minutes.

Add the soba noodles and cook until heated through, about 2 minutes (see NOTE). Taste, and season with more salt and/or lime juice, if desired.

Ladle the soup into bowls, generously top with cilantro and serve hot.