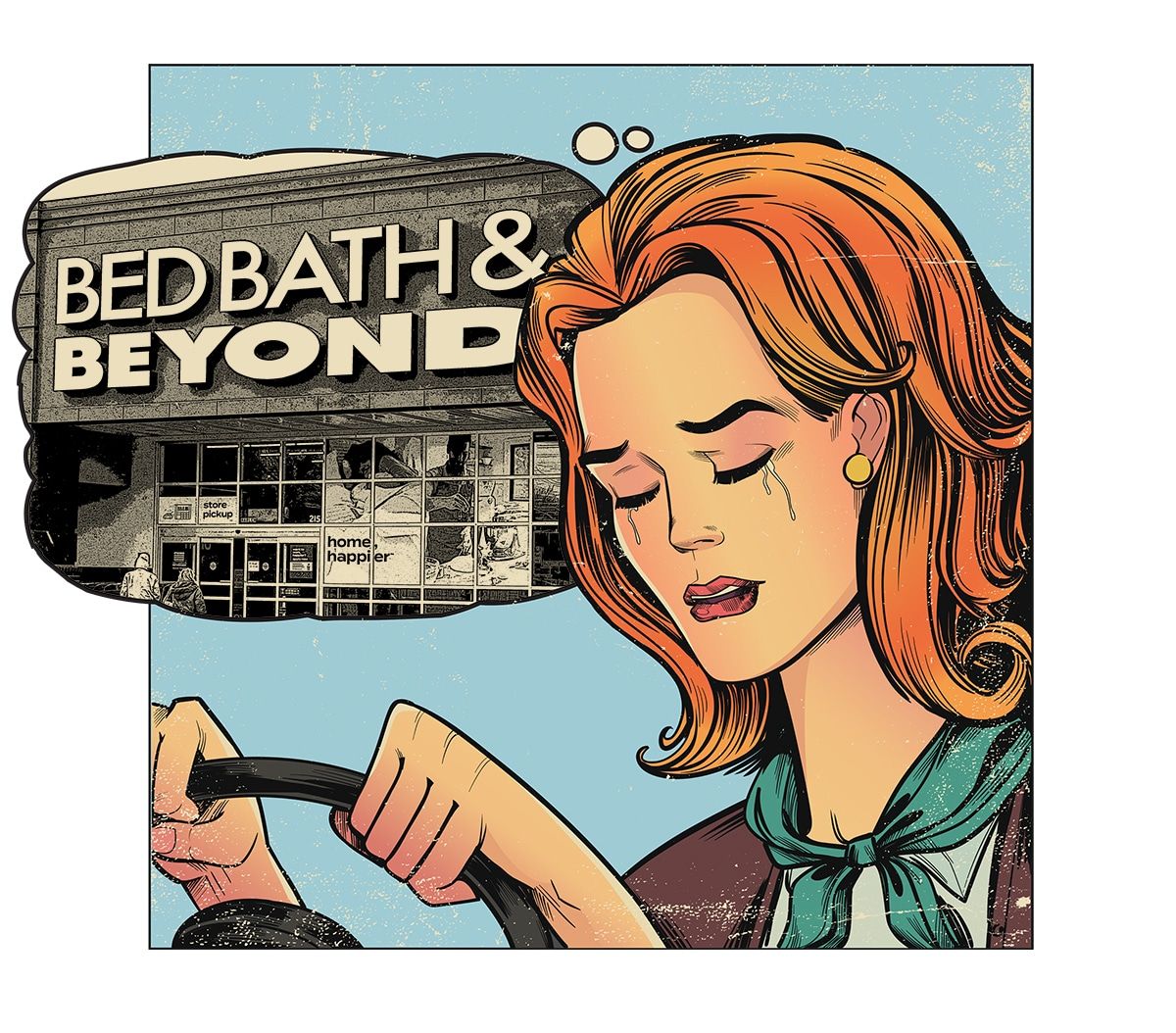 It was the “Beyond” that always captured our imaginations. Beyond the bed and the bath are the kitchen and the garage, and the yard and the road, and the forest and the sea and the stars. Beyond that is unknowable, but one guesses it feels a lot like a $179 goose down comforter, 20 percent off with a coupon.

There was always a coupon. Until recently.

Bed Bath & Beyond is in trouble. Last week, the company signaled that it may need to file for bankruptcy protection. Its sales are significantly down, and its stock price has plummeted. After closing 150 stores earlier this year, the company announced this week that it would close 62 more.

There’s not a lot of living, laughing or loving in the home decor section, one might say. There’s tension by the tension rods. Something discomfiting is going down in the land of comfort and comforters.

In a Washington mall on Wednesday evening, the front doors to the great Beyond were locked. A giant cardboard “open” sign directed customers to a side door. Inside, signs advertised a 70 percent off “Warehouse clearout event,” and many shelves were bare. A single 10-liter flip-lid trash can sat alone. The throw pillows were askew. A whole row of shower curtains was cleaned out. Keeping vigil over the glassware was a single $6.99 pink mug, inscribed with a phrase, “Good things are coming.”

This store, located in the Columbia Heights neighborhood, wasn’t on the list of stores slated for closure. Nevertheless, things did seem amiss. The front doors were broken, an employee explained, so that wasn’t necessarily a portent. But what to make of the fact that the store’s sound system was blaring “Better Days,” the song by 1999 one-hit wonder Citizen King (lyrics: “I’ve seen better days / and the bottom drops out”)? Followed by Katy Perry singing: “Just because it’s over doesn’t mean it’s really over.”

Whether this was a coincidence or a coded message is beyond our understanding; asked about the music, a Bed Bath & Beyond’s publicist responded only that the company “work[s] with an external partner to create playlists, which can vary by store.”

Let’s go back. Before Amazon, Bed Bath & Beyond was the everything store. “We can manage and present things now to the customer where they ‘get it’ right away,” said the company’s co-founder Len Feinstein, to The Post in 1993, a year when its stores swelled to an average of 35,000 square feet. “That way size is a benefit.” That was a different time, when the novelty of big-box stores held a certain allure referred to as “masstige” (that is, prestige consumerism for the masses). You could go to Borders for culture and Target — excuse me, Tar-zhay — for design. Shortly after the opening of BB&B’s first Manhattan store in 1993, it was described by the New York Times as the “kind of place where couples are seen holding hands near the soap dishes and kissing in the cookie-cutter area … Maybe it’s Diana Ross on the tapes that fill the air or just the sense that shopping for all those homey kinds of things is, well, romantic.”

It also occupied a 35,000-square-foot space in the imagination of screenwriters, popping up in shows from “The Good Place” to “30 Rock.” The presence of BB&B signaled that a character needed to do normal, boring, adult things. Will Ferrell’s character in “Old School” cites a trip to Bed Bath & Beyond as a reason he can’t stay out late partying with college kids. (He parties anyway.)

Even within the realm of mundane fictional scenarios, the Beyond of it all created a sense of possibility. In “Parks and Recreation,” newly cohabiting young couple April and Andy head to the store to buy housewares and walk away with a marshmallow gun (“beyond” inventory, for sure). “Broad City” had an extended bit about BB&B being Abbi’s favorite place; she has a special handshake with all of the employees, and strong opinions about where items should be displayed. The 2006 Adam Sandler movie “Click” hinges on a Bed Bath & Beyond purchase of a universal remote that, oops, controls time. The store gets a shoutout as one of the country’s most patriotic things (along with Taco Bell, Valium and porn) in “America, F— Yeah!” the filthy-mouthed theme song for the 2004 satire “Team America World Police.”

More than other retailers that also do business online, Bed Bath & Beyond is very much a shop-in-person vibe. The Columbia Heights store’s pathway winds around like a maze, ensuring you have to pass through kitchen, bedroom, bathroom and decor sections to check out — making you all the more likely to pick up something unexpected. A miniature Christmas tree-shaped waffle maker? A “Snackeez” combo drink-snack holder? The Pet Wedge pocket hair removal tool?

It lacks the umlauted sleekness of Ikea, or the stylish universality of Target, where you can walk in hoping to buy decongestant and walk out with a container of kiwis and a cute designer capsule-collection top, but it’s inexpensive and impressive in its abundance. All those towels, perfectly stacked to the ceiling! Until someone pointed out that the towels weren’t actually folded that well — that they were just strategically shaped over foam blocks to create the illusion of towering perfection and order, and, well, the company is just creating its own metaphors, isn’t it?

Bed Bath & Beyond reported worse-than-expected quarterly losses, and has said it might file for bankruptcy.

Looks like customers never forgave them after finding out the immaculate stacks of towels were a lie. pic.twitter.com/TAPaHlMV7M

Is it really the end for these funhouses of discounted spatulas and sheets? Pundits have been keeping vigil at the company’s deathbed for a few years now, but it’s managed to hold on. Last year, Bed Bath & Beyond enjoyed a brief resurgence as a meme stock, shares of a company that go viral and are snapped up by investors thanks to social media. (One 20-year-old trader made $110 million.) The chain has long outlived its similarly vaguely named competitor, Linens ’n’ Things. (“I saw that Linens ’n’ Things was going out of business,” quipped comedian Eugene Mirman in 2011, “And I thought, ‘Should’ve been more specific.’”)

The Beyond is full of things — shiatsu foot massagers, an elaborate storage device called the “Battery Daddy,” air fryers, so many post-holiday overstocked air fryers (great sales! Deeply discounted!) — but the Beyond is also intangible.

It is a middle-class faith in self-improvement through nice-looking, nice-smelling stuff. The idea that a shoe rack, or a scented candle, or a higher thread count set of sheets could be the thing that could fix our homes, and — by extension, just a little bit — our lives. In the beyond of our imaginations, we are tidy and stylish, and our duvets aren’t pilled and our towels aren’t scratchy, and the air smells like lemon verbena, except when it smells like whatever we just popped into the air fryer.