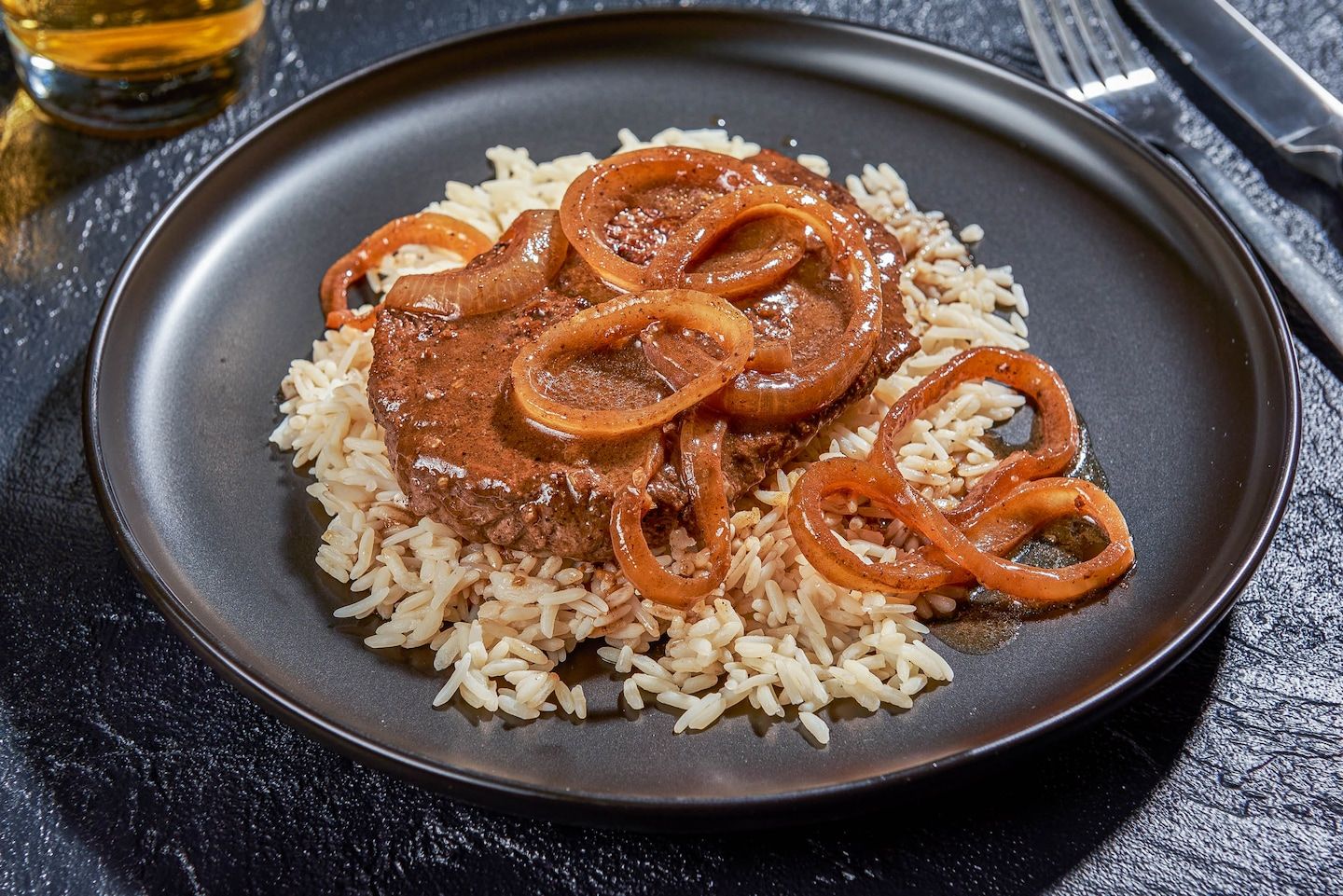 This recipe comes from the Eat Voraciously newsletter. Sign up here to get one weeknight dinner recipe, tips for substitutions, techniques and more in your inbox Monday through Thursday.

As a kid, when I opened the refrigerator and the smell of white vinegar, harsh and exciting, hit my nostrils, I knew we were having steak for dinner. The white ceramic bowl filled with meat and marinade didn’t look like much. It contained a heap of tenderized steaks, piled alongside rings of white onions like unfolded laundry, drenched in vinegar and salt, waiting to be sizzled in a pan until saucy and browned.

On special occasions, or the odd Friday, my dad would start the day by tenderizing cube steaks, pounding them with the prickly end of a meat mallet until their surfaces were quilted, back and front. Only then would he submerge them in a salty-vinegary slurry with rounds of sliced onion. The steaks would sit in the fridge all day, during which time the vinegar would get to work on the open network of meat proteins, softening them from the outside in.

When it was almost time for dinner, after he’d made a pot of rice and fried some plantains, my dad would heat a heavy skillet and add a thick slick of oil. Then the entire contents of the bowl would go into the pan, and, seconds later, the vinegar would punch us all in the nose again before softening with the heat and turning into a salty sauce. The steaks and onions would brown quickly and evenly, caramelizing into a sweet, deep mahogany brown.

Scent has always triggered my clearest memories, sharpening the sepia-toned edges of nostalgia, pulling me back in time. But like a lot of people of Puerto Rican descent, while I might love the food of the beautiful island in the Caribbean and have childhood memories of eating it with family, I didn’t know much about its history or origins until recently.

It’s mostly heartening to know that I’m not alone. “Puerto Ricans are quick to argue about the roots and regulations of what Puerto Rican food is,” Illyanna Maisonet writes in “Diasporican: A Puerto Rican Cookbook,” but the fact is that many of us don’t know much about our cuisine. “That tends to happen when you believe it’s your birthright; you take it for granted. Sometimes it feels like, somewhere along the line, Puerto Ricans lost their way. And with it, their food,” she writes, before asserting that colonialism is to blame.

Despite its fertile land and tropical climate, 80 percent of the food consumed in Puerto Rico is imported, and therefore often expensive and out of reach for many, leaving their pantries “in a perpetual state of survival mode,” Maisonet writes. It’s a symptom of Puerto Rico’s status as a colony of the United States and a reason that many more Puerto Ricans, who are of indigenous Taino, Spanish and African descent, live in the mainland United States than on the island.

Anyone with a link to the island, or curious about its history and culture, needs to read “Diasporican.” It’s filled with history and helpful explanations of the island’s sometimes idiosyncratic food. It’s also a deeply personal book, with beautiful reflections from Maisonet’s experience growing up within the Puerto Rican diaspora.

Flipping through it for the first time, I was moved to tears when I came upon her Bistec Encebollado recipe. I hadn’t tasted the dish in decades. It’s not my father’s recipe — Maisonet doesn’t marinate the meat with the onions; they’re added later — but I knew I had to make it immediately. Its scent and flavors evoked my childhood. They also reminded me that Puerto Rico will always be a place I might never really know, and my Puerto Rican-ness may continue to feel like a cloak that doesn’t quite fit. Then I read Maisonet’s introduction, in which she explains that “Diasporican” is not a Puerto Rican cookbook — it’s for cooks like me, those of us who grew up in the diaspora. As she writes, it’s for “the tribe of Ni De Aquí, Ni De Allá (‘not from here, not from there’).” That liminal place may sometimes be uncomfortable, but it’s never not delicious.

Season the steaks with salt and pepper. In a pilón or other mortar and pestle, mash the garlic cloves. Transfer to a bowl or container large enough to hold the steaks snugly and stir in the vinegar, olive oil, soy sauce, if using, and granulated garlic. Add the steaks and let them marinate in the refrigerator for at least 10 minutes and up to 24 hours.

In a 12-inch cast-iron skillet over medium heat, heat the oil until it shimmers. Add two of the steaks and saute for 5 to 7 minutes, or until cooked to your liking. (The steaks may not retain much or any pink in their centers because of the marinade.) Repeat with the remaining steaks, adding more oil as needed. (Reserve the marinade.) Transfer the steaks to a plate and cover to keep warm.

Add half of the onions and another 1 tablespoon of canola oil, if necessary, to the pan drippings and cook, stirring occasionally, until translucent, 2 to 3 minutes. Stir in the reserved marinade and the water, and simmer, adjusting the heat as needed, for about 25 minutes. Add the remaining onions and cook until the sauce reduces by about half, another 5 minutes. Nestle the steaks back into the sauce to warm them.

Portion about 1 cup of rice on each plate. Top with a steak, and divide the onions and pan sauce over each steak. Serve hot.

NOTES: Cube steaks are typically sold already tenderized, but for more tender meat and a faster marinating time, it’s good to tenderize them again. To tenderize cube steaks, place them on a cutting board, uncovered, and using the “tooth” side of a meat mallet, pound the steaks five times per piece.

If you plan to serve the dish with rice, put the pot of rice on the stove before you begin making the steak, and both should be ready at about the same time. The amount of uncooked rice you’ll need to yield about 4 cups of cooked rice will vary depending on the variety of rice you choose. For long-grain white rice, rinse 1 1/2 cups of rice until the water runs clear. Then, place it in a medium saucepan over medium-high heat. Add 1/2 teaspoon of olive oil and stir to coat the rice. Add 3 cups of water, a pinch of salt, if desired, and bring to a boil. Reduce the heat to low, cover and simmer until the rice is tender and the water is absorbed, 10 to 15 minutes.

Catch up on this week’s Eat Voraciously recipes: