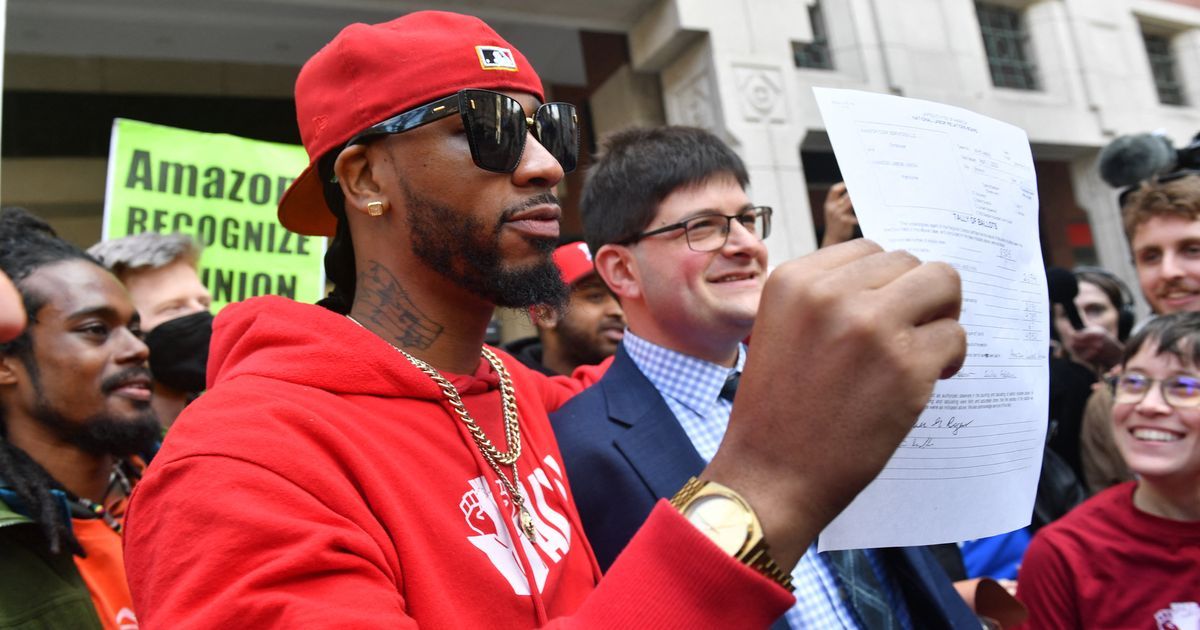 The upstart Amazon Labor Union made history when it won a union election at the JFK8 warehouse in Staten Island last spring, the first labor group in the U.S. to do so. But its groundbreaking victory was only just made official this week, more than nine months after the ballots were counted and the union came out ahead, 2,654 to 2,131.

On Wednesday, a regional director for the National Labor Relations Board certified the union as the representative for workers at the New York facility, rejecting a litany of claims from Amazon that the vote was illegitimate. The company’s allegations were litigated last year, with both sides calling witnesses and filing briefs.

So far, Amazon has lost the fight at each step. First, a board hearing examiner heard the case and recommended the ALU be certified. Then, the regional director reviewed that hearing examiner’s findings and agreed.

“Winning a union election is really just a precursor to a bigger showdown – the fight for a first contract.”

It’s not the end of the road for Amazon, however. The company can appeal the decision to the full board in Washington, asking that it scrutinize the regional director’s conclusions. Amazon told HuffPost on Thursday that it plans to do so. But given the NLRB’s union-friendly composition following President Joe Biden’s appointments, it would be surprising if board members stepped in to overturn the regional director’s decision.

“As we’ve said since the beginning, we don’t believe this election process was fair, legitimate, or representative of the majority of what our team wants,” Amazon spokesperson Kelly Nantel said in a statement.

If the union is ultimately made official, then this effort by Amazon might strike a lot of people as an expensive waste of time. (Attorneys from the law firm Hunton Andrews Kurth have been helping the retailer litigate the case, according to board records.) But there are strong incentives for deep-pocketed companies to take these legal battles as far as they can, regardless of whether their arguments ultimately hold water.

Winning a union election is really just a precursor to a bigger showdown — the fight for a first contract. Employers have a legal obligation to bargain in good faith with a union, but not until that union is officially certified as the workers’ legal representative. Despite all the headlines about the ALU’s win last April 1, the company has had no obligation to sit at the bargaining table until now.

Being able to object to a party’s conduct in a union election is important for both unions and employers. Either side could break the law and violate workers’ rights, so it’s important that there’s an appeal process.

In fact, the board found that Amazon itself illegally tainted the vote in a different election, at the BHM1 warehouse in Alabama in 2021, by having a postal drop box installed for ballots against officials’ guidelines. The board threw out the results because of Amazon’s conduct and ordered a do-over vote. The Retail, Wholesale and Department Store Union lost that second election as well, by a narrower margin than the first.

But such appeals can take many months, and the lengthy process can greatly benefit employers, regardless of the outcome.

By holding off on bargaining, a company makes it even longer before a union can show workers tangible gains through a contract. The holdup can be especially helpful to a company in the position of Amazon, which is fighting a broader battle against organized labor that includes the Teamsters. Warehouse workers all over the country are curious what kind of headway a union can make at JFK8. The more Amazon can make collective bargaining look difficult, the better for Amazon.

A drawn-out process can also reward Amazon when it comes to the contract itself. The company has notoriously high turnover rates in its facilities. As time goes on, more and more of the workers who were there to vote in the ALU will depart from JFK8 and take other jobs. That can make it more challenging for a union to hold its coalition together during the bargaining fight. It also forces the union to constantly organize the new employees who come in the door.

“By holding off on bargaining, a company makes it even longer before a union can show workers tangible gains through a contract.”

Throughout its legal challenge, Amazon has maintained that both the ALU and the board itself engaged in misconduct during the voting process to tip the election in the ALU’s favor. CEO Andy Jassy, asked about the election at the 2022 Code Conference in Beverly Hills last September, sounded a bit like a GOP politician contesting an election loss in Arizona: “If you look at the details of that vote, there are a lot of very disturbing irregularities,” the executive said.

The company claims the union intimidated voters and chilled turnout, and that NLRB officials swayed the vote by pursuing an injunction to reinstate a fired Amazon worker a week before the vote would begin. In addressing this week’s decision, Amazon’s Nantel suggested the board could not fairly investigate the conduct of its own personnel. “We knew it was unlikely that the NLRB Regional Office would rule against itself,” she said.

The NLRB office that Amazon claims meddled in the vote is Region 29, based in Brooklyn. The hearing into board officials’ conduct was transferred to Region 28, based in Phoenix, Arizona, in order to avoid conflicts.

Following the regional director’s decision on Wednesday, ALU President Christian Smalls said on Twitter that the ALU had won “fair and square” and it was finally time for the company to start bargaining.

“Come to the table,” he told Jassy.