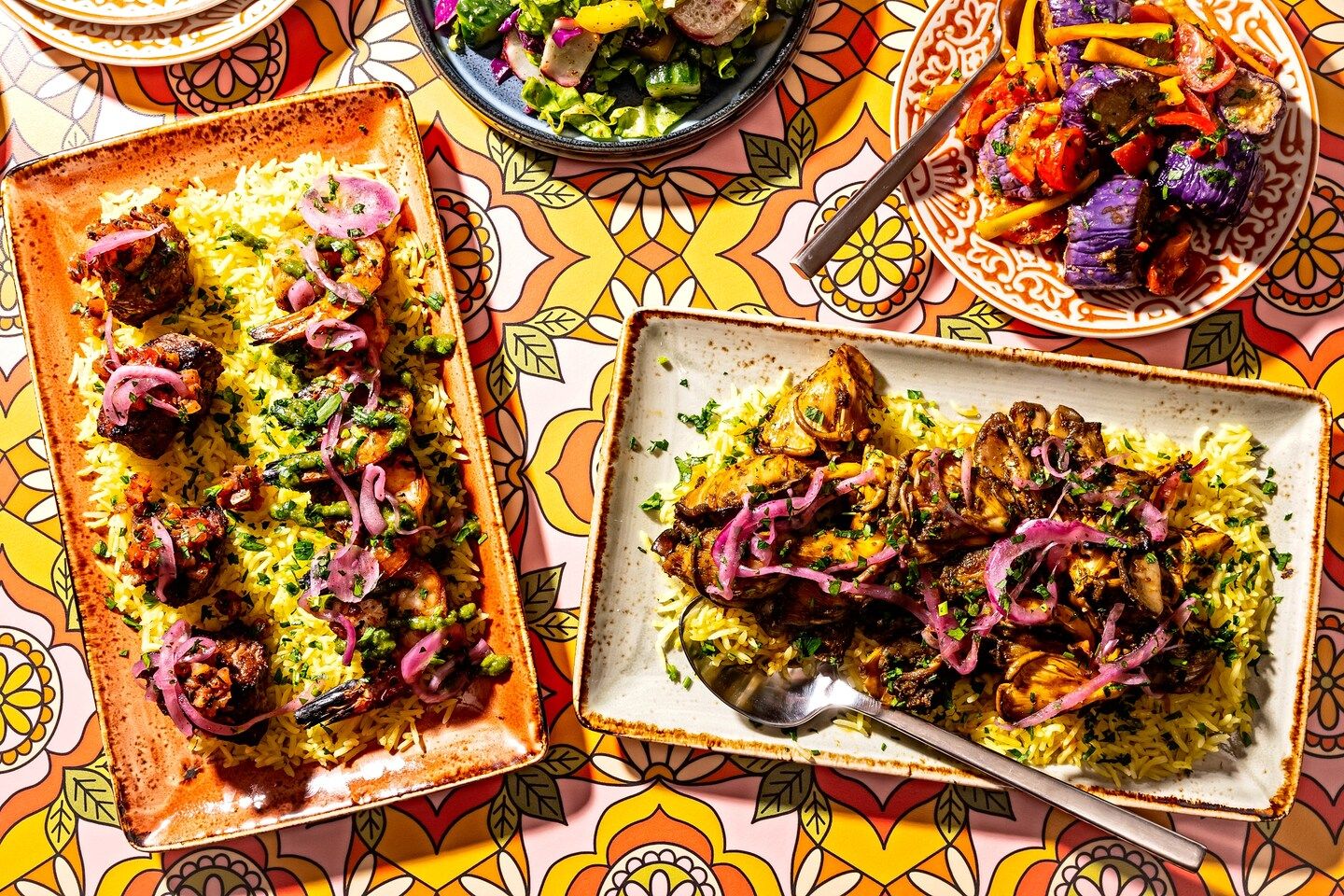 In Egypt, where Omar Hegazi was raised, falafel are the go-to street snack. They’re made with dried fava beans, says the opening chef at the freshly minted Kirby Club in Fairfax, and are referred to as taameya — “tasty bite” in Arabic. The dish isn’t sold by portion size. Instead, a customer tells a vendor how much he wants to spend for the treats, which are served in a cone of newspaper. The presentation at Kirby Club is different — the falafel arrive five to a $12 plate, with pita for stuffing and tahina for dipping — but the flavor springs from the same coriander, garlic and onion Hegazi recalls from his youthful grazing in Cairo.

Falafel are one reason to explore the latest dining attraction in the Mosaic District in Northern Virginia. Co-owner Rose Previte is another. She’s the vision behind the popular Maydan and Compass Rose restaurants in Washington, known for their live-fire and global cooking, respectively. For her latest act, she’s shining a light on kebabs and her Lebanese heritage.

Kirby Club sounds like an unlikely name for a restaurant with an eastern Mediterranean theme. Previte traces the idea to her maternal grandparents, who emigrated from Kherbet Kanafar, Lebanon, with friends and settled in Akron, Ohio, where they established a social group in 1933. Figuring Kherbet Kanafar would be too difficult for their new community to pronounce, the members used a nickname to reference their hometown, 40 or so miles from Beirut. Gatherings were held in church basements, homes and elsewhere and designed to foster a sense of togetherness, including opportunities for offspring to meet (and match). Ohio’s Kirby Club continues today, says Previte, who says its Facebook page is maintained by a cousin.

Situated between local chains Matchbox and Alta Strada, the new kid on the block distinguishes itself with a central bar, car-size sea-foam-colored booths to one side and a rear wall that evokes the 1970s with hot-pink-and-orange wallpaper. Stepping in from a damp and dark night one visit, we’re told by an attendant, “It’s always sunny here.” The smiling faces of Previte’s family members captured in blown-up photographs on a front wall help make it so.

As does the food, commencing with the bright dips you absolutely, positively want to try with some of the hot pita bread. Kirby Club serves the best muhammara in the region. Dark with charred red peppers, gently crunchy with toasted walnuts and sweet-tart with pomegranate, the spread is balanced and beautiful. The vivid havuc, made with pureed carrots and seasoned with caraway, is as smooth as whipped cream, an effect achieved with the help of garlic whipped to a white fluff, otherwise known as toum. A scattering of fried onions adds gratifying punctuation. There are also bessara, whose pale-green hue is thanks to cilantro in the puree of fava beans, tahini and lemon juice, and a tangy hummus dusted with sumac.

A salad of pickled Japanese eggplant, peppers and tomato opens the (refrigerator) door of Hegazi’s youth and introduces diners to his grandmother’s recipe. Deep-fried eggplant, stung with vinegar and seasoned with cumin and garlic, proves a delicious keepsake. The signature kebabs, on the other hand, follow an R&D trip the chef and Previte took last year to Turkey, where they ate in homes as well as restaurants. One result of their mission is tepsi kebab, minced beef and lamb flattened in a cast-iron pan and baked with vegetables in the oven. Tomato paste, brushed on the bottom of the pan, ensures zest from bite to bite.

Check, please. Please! This diner got so tired of waiting, she left.

Hegazi, 35, comes to the area from New York, where he opened the fast-casual Zooba. But he’s no stranger to Washington, having previously cooked at Bourbon Steak in Georgetown and for José Andrés’s ThinkFoodGroup, which sent him to Texas to open a branch of the company’s Middle Eastern-themed Zaytinya (now closed). He’s worked in California’s Napa Valley as well, at the esteemed Auberge du Soleil.

A diner gets a sense of all that experience in Hegazi’s menu, which acknowledges that the world is made up of people who want their own plate of food and others who don’t mind competing for the last morsel of whatever on a platter.

The non-sharers will rejoice over the plates for one, featuring a variety of kebabs, that feel like a feast, since they’re dropped off with a bed of turmeric-tinted rice, sumac-spiked onions and a colorful salad that comes with a choice of two dressings: a ranch made with strained yogurt and another based on the spice blend za’atar. “Surf and turf” lets you sample both a lamb kebab and a shrimp kebab and declare a winner. How about a tie? Because I love the dance of clove, cinnamon, cardamom and other warm spices on the marinated meat, and the shrimp, also cooked over lava rocks on a gas grill, woos just as much with creamy green squiggles of pureed cilantro, parsley and saffron. Fleshy oyster mushrooms crisp up nicely without the help of oil or salt in a kebab perked up, like the others, with pickled onions.

“Picnic platters” are a throwback to Previte’s childhood memories of Labor Day spreads with Kirby Club at a Lebanese festival known as Mahrajan. My current fascination is the whole roast chicken, which gets brined ahead of a rub of garlic, turmeric and oil and arrives on a raft of flatbread with the aforementioned fluffy rice and salad, but also crinkle-cut fries sprinkled with za’atar and a chance to audition the kitchen’s alluring rainbow of sauces. Beef ribs, cooked overnight and finished with a pomegranate glaze, take a back seat to the succulent chicken.

Vegan soft serve marrying date with oat milk is a lovely way to conclude a meal here. When the machine wasn’t cooperating one visit, dinner still ended sweetly when a host dropped off a plate of dried apricots and bites of chewy Turkish delight.

The people who watch over you tend to talk in exclamation points. Their enthusiasm for the food and drink here comes out in gale-force descriptions. When a server notices we’ve ordered two dishes with pickled vegetables, she says, “You can never have too many pickles!,” and when another attendant sees us lapping up the white-with-garlic toum, she jokes, “Don’t go anywhere afterwards!” At a time when restaurants are struggling to find talent, the hospitality at Kirby Club feels like a hopeful sign. And I love how serving utensils precede the arrival of dishes that require them. Big spoons sound obvious, but have you noticed how many restaurants don’t think to offer necessary tools for transferring food from A to B at the table?

If restaurants knew how many people tell me they don’t go to restaurants based on uncomfortable sound checks, there would be more soft touches out there: carpet, fabric panels, music played at a lower volume. Just trying to help you out, Kirby Club! Because eating there is a blast, in all senses of the word.

Compass Rose and Maydan are within a pita’s toss of Previte’s home in the District. The choice of Fairfax for Kirby Club was fueled by suburban fans who came to Washington pre-pandemic but are less inclined to make the trek now, having gotten used to working from home, says the restaurateur, who co-owns all three establishments with Mike Schuster, a resident of nearby Falls Church. Plans are underway to open another Kirby Club in Clarendon in the summer — music to the ears of those of us who will have shorter commutes to the pleasures of the newcomer’s table.