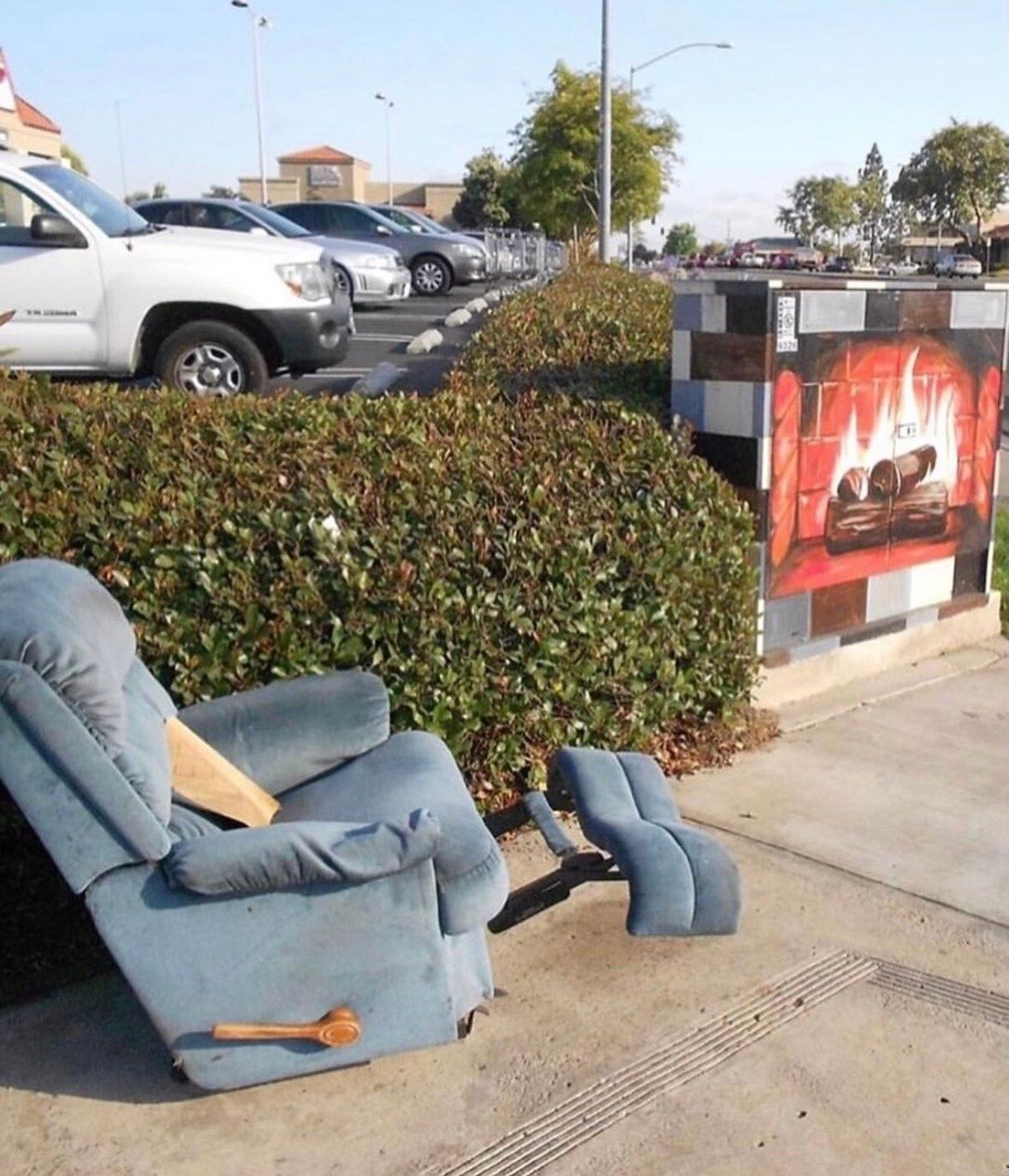 Elementary school art teacher LeoAngelo Lacuna Reyes was seeing a trend in his San Diego neighborhood that was getting under his skin. Gang symbols and graffiti were becoming more prominent. They were an eyesore.

“I’ve lived here since the second grade, and I thought my neighborhood — Mira Mesa — was looking a little run,” said Reyes, 36.

Specifically, as more power lines were buried, large green utility boxes were being tagged with gang symbols, names and graffiti, he said.

“I do view graffiti as art, but tagging [leaving a name or a mark] is just doodling,” he said. “Some people think of it as art, but it can really blight up a neighborhood. Kids with a lot of angst see a big electrical box, and it’s an inviting surface for them to deface.”

Reyes noticed that someone had creatively painted over a downtown power box in 2010, so he decided to take the idea to a new level in his own neighborhood, he said.

Neighborhood upkeep, he pointed out, can be a crime deterrent.

“It’s harder to do things that are sketchy in a place that looks well taken care of,” he said. “Getting rid of the blight has a positive ripple effect.”

That same year, in 2010, Reyes asked the Mira Mesa Town Council to give him permission to paint over some of the tagged boxes that had become eyesores, similar to projects that had been done in cities as Somerville, Mass. and Fort Collins, Colo.

“I did a little research and learned that electrical boxes turned into public artworks actually helped to curb tagging,” he said. “They brighten up the neighborhood and help to discourage vandalism because they create a positive vibe.”

After getting the council’s approval to test that theory and paint a few metal boxes, Reyes said he asked his neighbors for donations of leftover house paint and went to work.

For his first project, he turned a graffiti-covered box across the street from a library into a colorful four-sided bookcase.

“The power box was located in a place that wasn’t very well lit,” he said. “People who lived nearby said the box was tagged every week, no matter how many times they cleaned it up.”

After Reyes’s new paint job, nobody touched it, he said, noting that the bookcase is now a popular neighborhood centerpiece and hasn’t been vandalized in more than 12 years.

City officials were impressed with his efforts and soon gave him permission to take on more projects.

“We’ve absolutely seen a reduction in tagging on the power boxes since [LeoAngelo] started doing this,” said Bari Vaz, president of the Mira Mesa town council.

“Occasionally, somebody will tag his art, but it doesn’t happen often,” she said. “People get upset if they see tagging because Leo has put so much effort into what he does. The artwork has brought a lot of pride to the community.”

Reyes teaches art at Hickman Elementary in San Diego and now enlists help from school kids, private students and other artists to turn utility boxes in the Mira Mesa neighborhood into art pieces to be admired by anyone walking by or stuck in traffic.

Occasionally, a tagger will spray paint over the artwork, he said, but he’s ready to respond with volunteers to touch up the boxes.

More than 40 boxes have been transformed so far, Reyes said, adding that his students have also painted several community murals. He posts photos of the artsy makeovers on his website.

One transformer box was turned into a beach scene, while others have been painted with butterflies, fish, flowers and wild animals. When Reyes turned one into a fireplace, somebody in the neighborhood put an old recliner next to it for laughs.

“It was nice to see people having fun with it,” he said. “I always want each project to feel comfortable in its space.”

When he first started painting in the neighborhood, several people called the police to report that he was vandalizing the boxes in broad daylight, Reyes said. Now he wears a T-shirt with “Mira Mesa Art” printed on the back.

“People pretty much know who we are now, and they’re thankful that we’re cleaning up the tagging,” he said.

His students are happy to play a role in beautifying the neighborhood with creative works that are viewed by thousands of people driving by every year, said Cheav Chau, 47, noting that her twin sons, Joshua and Joseph Cho, 13, have painted three boxes with Reyes.

“The boxes are plain green or gray and it really transforms the street to have them turned into paintings,” Chau said.

Every time she drives past the utility box that her sons covered with bright sunflowers, she said she smiles, remembering how proud they were when they put the final touches on their project.

“They love the idea of contributing something beautiful to the community and having their work out there on display,” Chau said. “They’ve also learned a lot about art from LeoAngelo. He’s always very patient with them.”

Like Reyes, Lifang Sun said she thought the Mira Mesa neighborhood was looking neglected and run-down before the power box painting project was started. She encouraged her daughter, Diana Sun, then 15, to take art lessons with Reyes and contribute to the community uplift.

“Diana didn’t know how to paint before, but LeoAngelo taught her all of the elements and she painted a beautiful portrait of her blue angel fish one of the boxes,” she said.

Vaz said that thousands of people a day might see the painted boxes when they drive down Mira Mesa Boulevard, where many of them are located.

“It’s a hugely busy road and now they have something fun to look at,” she said. “LeoAngelo is one of the most giving people I know. He’s brought art to life for hundreds of kids.

Reyes said there’s nothing he enjoys more than asking his students if they’d like to take a field trip to paint another box with something whimsical.

He said he’s also happy that other cities, including Medford, Ore. and Memphis get on board with turning blight into bright community treasures.

In D.C., several artists have painted power boxes in the Logan Circle area as part of the Let’s Paint the Streets initiative, while in Arlington, Mass., new artists are selected every year to paint over tagged boxes.

“This is something any town can do with a little paint and some community involvement,” Reyes said. “Something like a giant goldfish in a public space brings new life and energy to a tired neighborhood.”