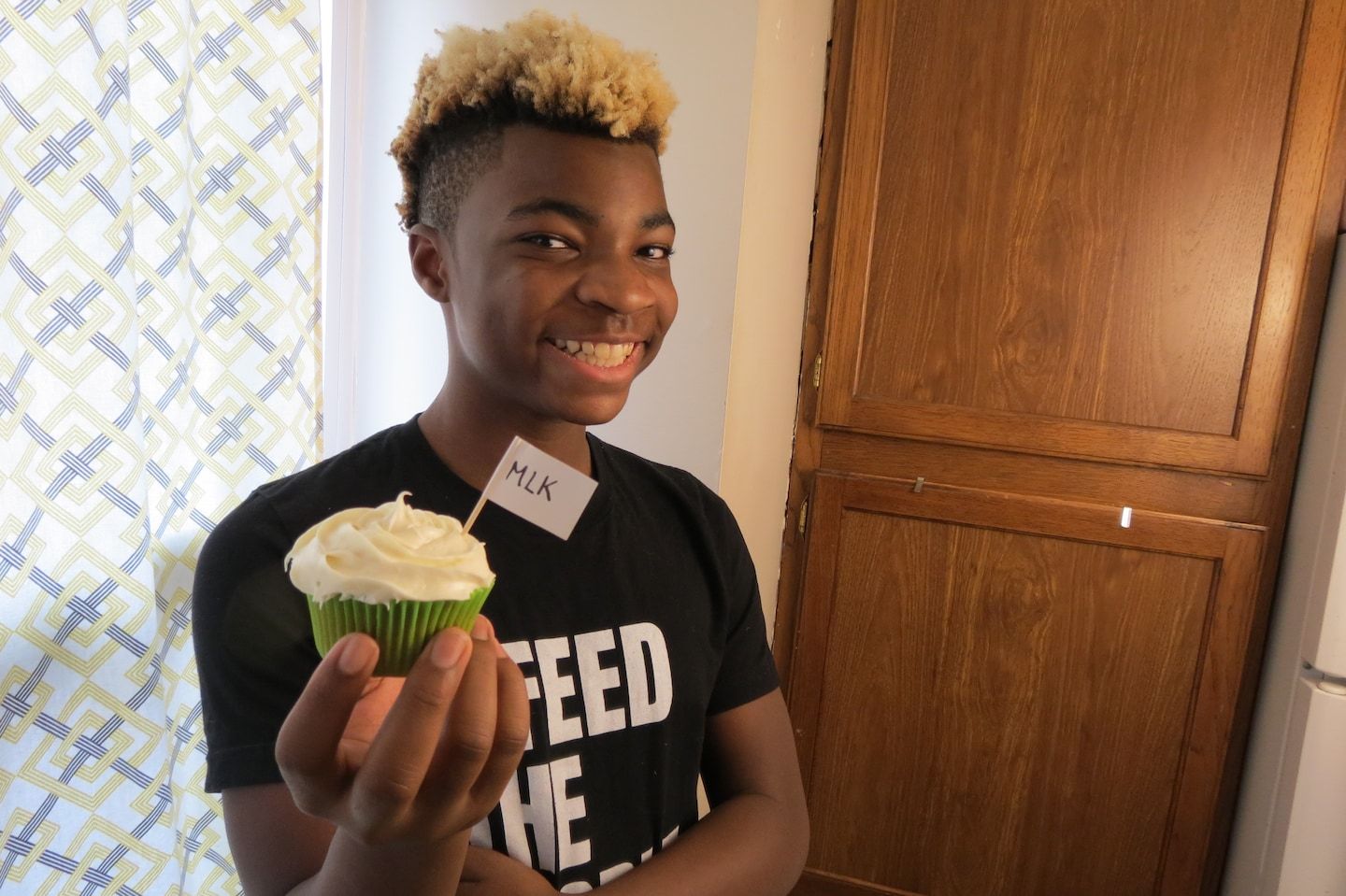 This story was first published in January 2020.

“He saw a problem he wanted to fix and wasn’t hesitant about it,” says the 14-year-old.

It’s a lesson Michael took to heart. As chef and owner of Michaels Desserts, a home-based bakery in Bowie, Maryland, Michael donates a treat to those in need for each one he sells. (The business name has no apostrophe to remind Michael that they aren’t his desserts; he bakes for others.)

Want to make it yourself? Here’s an adapted version of Michael’s dreamy recipe.

(See below, or may substitute a Pillsbury vanilla-frosting-filled
pastry bag).

1. Preheat oven to 400 degrees. Use a fork to poke holes in the sweet potatoes, then place them on the aluminum foil covered baking tray. Bake 1 hour and 15 minutes.

2. Let sweet potatoes cool 15 minutes, then peel with your fingers. Roughly cut them with a table knife, then pack into a 1 cup measuring cup. Plop into a medium mixing bowl.

3. Melt a tablespoon of butter in a microwave-safe bowl (covered with paper towel) in a microwave oven for 15 seconds, then add to the sweet potato bowl. Measure and add 2 tablespoons heavy cream, ⅙ cup brown sugar, ½ teaspoon vanilla extract, ¼ teaspoon cinnamon, 1/4 teaspoon allspice and a pinch of nutmeg. Whisk until combined — it won’t be smooth.

4. Wash and dry the whisk. Measure and pour a cup of flour, cup of sugar, 2 teaspoons of baking powder and ½ teaspoon of salt into the large mixing bowl. Whisk until mixed, then add a ½ teaspoon of cinnamon, a ½ teaspoon of allspice and a 1/4 teaspoon of nutmeg and whisk again.

5. Crack the egg into a small mixing bowl. Add ½ cup of milk, ¼ cup of vegetable oil and 1 teaspoon of vanilla extract. Whisk together, then add to the large mixing bowl from the last step. Whisk until combined.

6. Mix in a ½ cup of the sweet potato mixture, then preheat the oven to 350 degrees.

7. You may need an adult’s help here. Heat 1/2 cup of water in a microwave-safe measuring cup for 1½ minutes. Carefully pour the boiling water into the batter, then whisk. It will be soupy.

8. Scoop the batter into the cupcake pan filled with cupcake liners, using a small measuring cup, filling each two-thirds full. Bake 25 to 30 minutes, until a toothpick put in the middle of a cupcake comes out clean.

9. Remove the cupcake pan from the oven. Let the cupcakes cool in the pan, on the stovetop, for 10 minutes. Then take them out of the pan to cool completely on a wire rack.

10. Press a hole in the middle of each cupcake with a finger.

11. Spoon the sweet potato pie filling into the sandwich bag. Cut a small hole in a bag corner with scissors. Squeeze the bag to fill each cupcake.

12. Frost each cupcake in a swirl pattern, starting on the outside and working your way in. Cupcakes can be stored in an airtight container in the refrigerator for a week.

1. Remove the cream cheese and heavy cream from the refrigerator. Cream the cheese with the mixer, using the paddle scraper attachment for 30 seconds. Add ⅔ cup of confectioners’ sugar and whip for 30 seconds.

2. Put the whisk attachment on the mixer, then pour in the cup of heavy cream. Whip until it looks like icing, about a minute and half. Add a ¼ teaspoon of cinnamon, ¼ teaspoon of allspice and pinch of nutmeg. Whip again, for 20 seconds, until just combined.

3. Remove the bowl, then spoon the icing into the sandwich bag. Cut a small hole in one corner with scissors.

4. Frost each cupcake in a swirl pattern, starting on the outside and working your way in. Store any extra icing in an airtight container in the refrigerator up to a week.

Perk up your lunch with a savory muffin

French toast recipe is breakfast on a stick

Cook from the forest with this easy rainbow chard quiche recipe