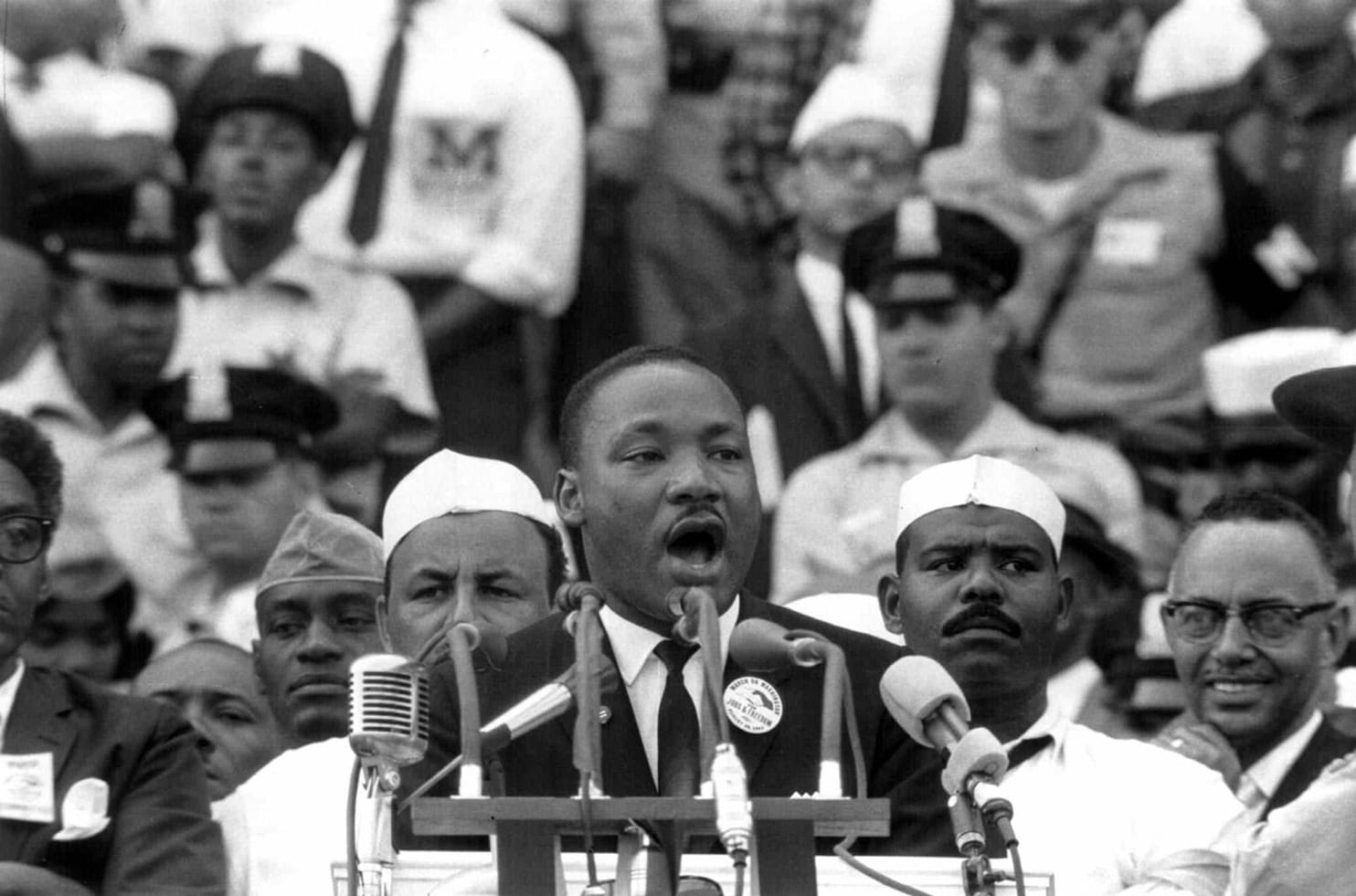 The Reverend Martin Luther King Jr. gave his “I Have a Dream” speech from the steps of the Lincoln Memorial in Washington in 1963. (Corbis/Bettmann-UPI)

This story was first published in January 2017.

Before leading boycotts, marches and a national movement in support of racial equality, the Reverend Martin Luther King Jr. was a prankster known as Mike or M.L.

When people walked down the street near his home in Atlanta, Georgia, he frightened them by tying one of his mother’s fox furs to a stick and poking it through a bush, pretending it was an animal.

To get out of piano lessons, he and his younger brother tried — unsuccessfully — to scare away their instructor, tinkering with their piano stool so it collapsed when the music teacher sat down.

He hated doing the dishes, loved ice cream and the board game Monopoly, and sometimes popped the heads off his sister’s dolls to use them as baseballs. King joins hands with other African American leaders and sings “We Shall Overcome” at a 1965 church rally in Selma, Alabama. (Associated Press)

“He was an ordinary kid,” said Marty Smith, a park ranger at the Martin Luther King Jr. National Historic Site, where he leads tours of the six-bedroom home where King grew up. “Just later on in life he did extraordinary things.”

King was born January 15, 1929, and grew up during the Great Depression, when many Americans struggled to find work and feed their families. His own family was very religious: Members of three straight generations were Baptist ministers. King later became a minister himself, preaching at the same church as his father and, years earlier, his grandfather.

He was required to recite a ­Bible verse at the dinner table before eating, Smith said, and for several years his favorite was the shortest, simplest verse he could find — John 11:35, “Jesus wept.”

Noelle Trent, a director of the National Civil Rights Museum in Memphis, Tennessee, is also the daughter of a minister. She said that having a parent who preaches gives you a greater awareness of “the turmoil in other people’s lives,” and that King would have seen a lot of turmoil, or trouble and confusion, while he was growing up.

Atlanta, like other cities in the South, was segregated, which meant that white and “colored” children could not typically use the same parks, schools, restaurants and stores. African American men and women were often treated with disrespect.

King’s father, Smith said, “taught him respect and the importance of standing up for what you feel is right.” King and his father were once shopping at a store where a clerk referred to King’s father as a “boy,” Smith said. “His father said, ‘My son is a boy, and I am a man, and you don’t speak to me that way.’ ”

King liked goofing off after school but also was a strong student. He skipped ninth and 12th grades and graduated from high school at 15. He was still relatively young — just 34, less than half the age of President-elect Donald Trump — when he gave his famous “I Have a Dream” speech in Washington. King and his wife, Coretta Scott King, pose with three of their four children in their Atlanta home in 1963. From left are Martin Luther King III, Dexter and Yolanda. (AP)

[Read KidsPost’s story on the 1963 March on Washington.]

One subject he struggled with in school: speech. While training to become a minister, he received a C in public speaking — proving, Smith said, that “if you keep on working, you can become one of the best ever.”

How much do you know about the Reverend Martin Luther King Jr.? Take our quiz.

Who was Martin Luther King Jr.?

The March on Washington 50 years later