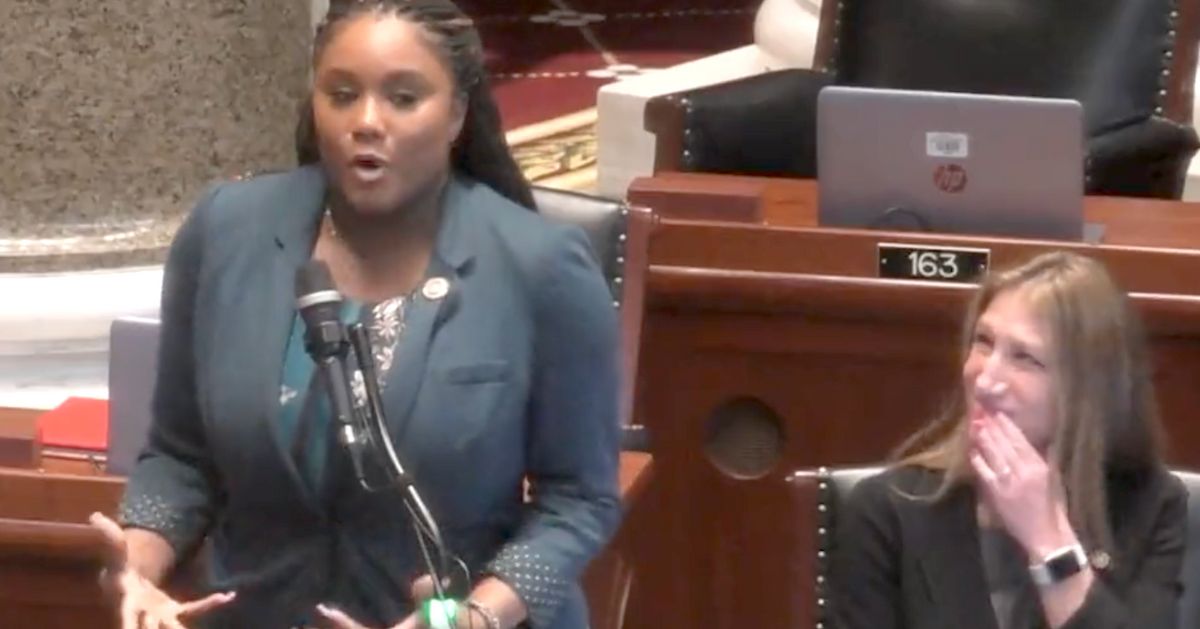 Women in the Missouri House of Representatives called out a “ridiculous” amendment this week that limits how they can dress.

The amendment was adopted Wednesday as the state House debated its rules, an act they typically pursue every two years at the start of a new General Assembly, the St. Louis Post-Dispatch reported.

Missouri Rep. Ashley Aune (D) slammed Kelley over her support for the amendment before the two sparred on the Missouri House floor.

“Do you know what it feels like to have a bunch of men in this room looking at your top trying to decide whether it’s appropriate or not? … This is ridiculous,” Aune said.

“Lady, you’re right, it is ridiculous, it is absolutely absurd that we even have to talk about it on the House floor,” Kelley snapped back.

“Then why are you doing it? … I agree, so why did you bring it up?” Aune replied.

In response to MO State Rep. Ashley Aune (D) questioning the need for the dress code amendment, sponsor Rep. Ann Kelley (R) says, “You would think that all you would have to do is say, ‘dress professionally’ and women could handle it!” pic.twitter.com/75gbaGnzZu

“There are things in this rule package that I think we should be debating, but instead we are fighting, again, for a woman’s right to choose something, and this time it’s how she covers herself,” Proudie said.

The lawmaker later questioned why she couldn’t wear a $1,200 suit she purchased for herself due to “someone who doesn’t have the range” telling her the piece is inappropriate.

“These folks need to stop playing on the taxpayers’ dime with this type of nonsense, for real,” Proudie tweeted.

“I spent $1,200 on a suit, and I can’t wear it in the People’s House because someone who doesn’t have the range tells me that’s inappropriate.” pic.twitter.com/uORB2OWTXW

Rep. Brenda Shields (R) said that the amendment was meant to clear up the dress code’s language, according to the Post-Dispatch.

The dress code previously described “proper” women’s attire as “dresses or skirts or slacks worn with a blazer or sweater and appropriate dress shoes or boots.”

Women represent less than a third of the members of the Missouri House.

The controversial amendment also raised concern among some men in the state House, according to USA Today.

“I wish we could just let this go and let people wear what makes them comfortable and professional and respectful,” said Rep. Peter Merideth (D), who called the amendment a “really dangerous road for us all to go down.”

Yep, the caucus that lost their minds over the suggestion that they should wear masks during a pandemic to respect the safety of others is now spending its time focusing on the fine details of what women have to wear (specifically how to cover their arms) to show respect here.

Kelley, in a statement on her Facebook page, said she received “lots of hateful calls, emails and messages” about the amendment and said her proposed change was meant to clear up the dress code.

“Before the House can begin their work, rules must be adopted. This was something that the Chief Clerk, who is in charge of decorum has requested for many years to get fixed in our rules. Now, it has been fixed,” she wrote.

The Republican added that she spoke for less than five minutes to fix “a grammatical error” in the rules, and she thinks she didn’t waste time.

“How is encouraging professionalism wrong? If there is ever a time to honor traditions and be professional, it is on the House… I will not apologize for standing up for these things,” Kelley said.