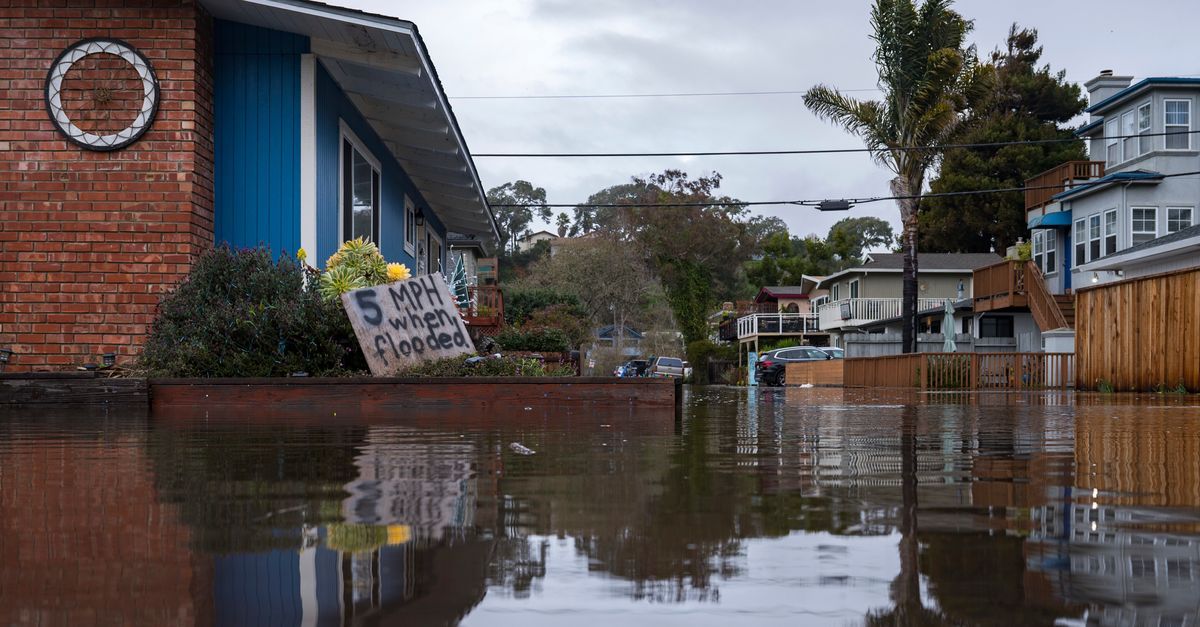 Bands of rain with gusty winds started in the north and spread south, with more storms expected to follow into early next week, the National Weather Service said.

More than 68,000 utility customers were without electricity Saturday morning, a number that was cut by more than half during the afternoon, according to poweroutage.us.

Flood warnings were issued for the region north of San Francisco Bay, including Marin, Napa, Sonoma and Mendocino counties.

To the south, warnings were posted for parts of counties including San Mateo and Santa Cruz, where the tiny community of Felton Grove along the San Lorenzo River was ordered evacuated.

The swollen Salinas River swamped farmland in Monterey County, and to the east, flood warnings were in effect for Merced County in the agricultural Central Valley, where Gov. Gavin Newsom visited to take stock of storm problems.

“The reality is that this is just the eighth of what we anticipate will be nine atmospheric rivers —- we’re not done,” Newsom said at a briefing with local leaders where he urged people to be vigilant about safety for the next 24 to 48 hours.

“This is happening all across California but I want to say … you guys are disproportionately taking the brunt of it, and if you feel that way you’re right,” Newsom said.

The UC Berkeley Central Sierra Snow Lab tweeted Saturday morning that it received 21.3 inches (54 centimeters) of snow in 24 hours and that its snowpack of about 10 feet (3 meters) was expected to grow several more feet by Monday.

A backcountry avalanche warning was issued for the central Sierra, including the greater Lake Tahoe area.

We’re expecting another 2-3 feet of snow by Monday morning, so much more to come!#CAwx #CAwater pic.twitter.com/KLL2aOoOpX

At least 19 storm-related deaths have occurred, and a 5-year-old boy remained missing after being swept out of his mother’s car by flood waters in San Luis Obispo County.

Half of the deaths have involved motorists, and some could have been prevented if drivers had heeded road closure signs, said Sean Duryee, acting commissioner of the California Highway Patrol, during a briefing by state and federal officials on Friday.

In Santa Barbara County, where a massive debris flow through the community of Montecito killed 23 people on Jan. 9, 2018, residents were told that new evacuations were not expected but that they should be prepared.

Montecito and adjacent areas were most recently ordered evacuated last Monday, the fifth anniversary of what is locally remembered as the “1/9 Debris Flow.” But the community perched on foothills of coastal mountains escaped serious harm.

In a visit to Montecito on Friday, Newsom asked residents to exercise caution, and to heed warnings from public safety officials.

“I know how fatigued you all are,” Newsom said. “Just maintain a little more vigilance over the course of the next weekend.”

Dry days are in next week’s forecast for California starting on Tuesday.

“Question will then become do we stay dry through the end of month?” the San Francisco Bay Area weather office wrote.