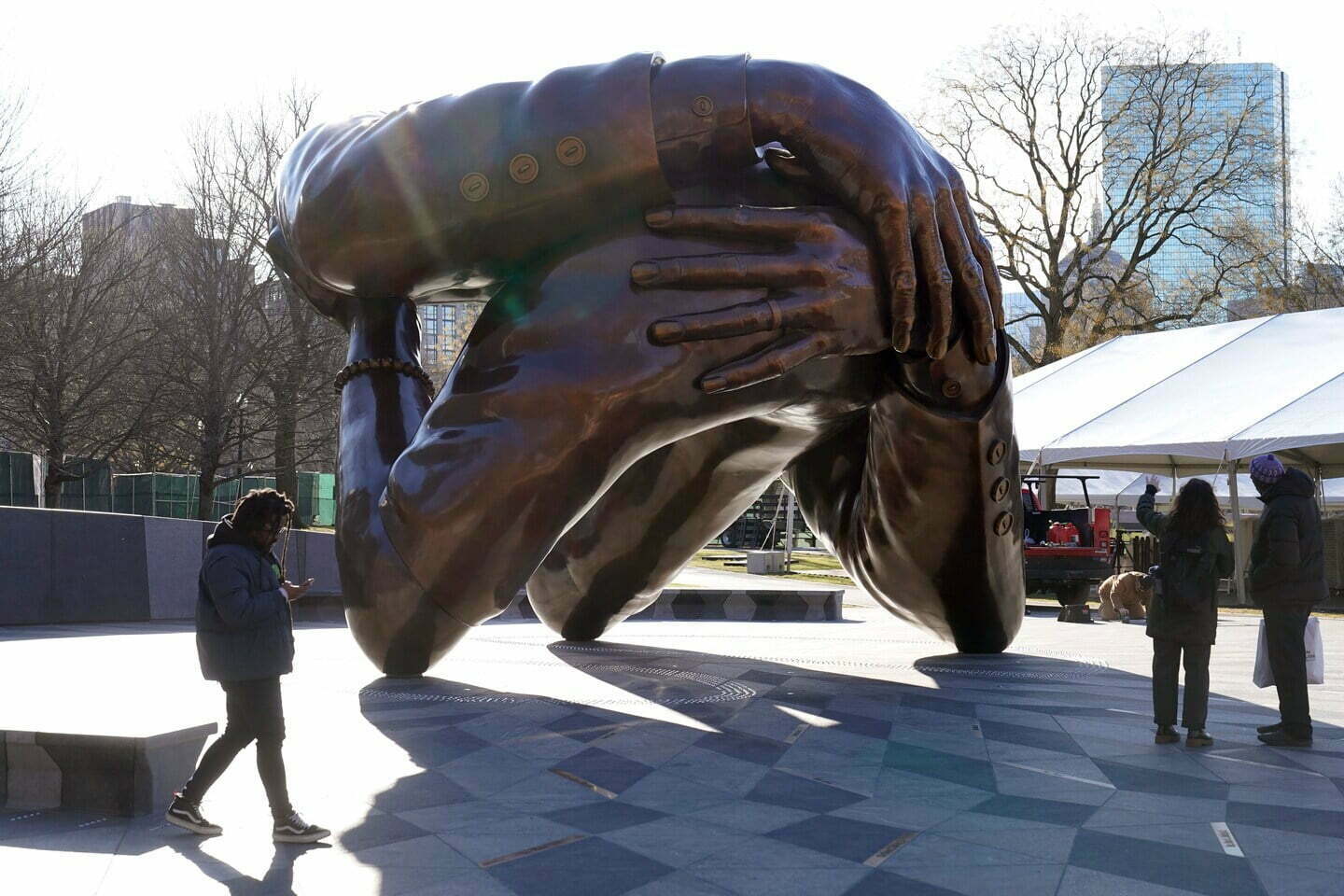 The road to online mockery is paved with good intentions.

On Friday, a collection of civic organizations unveiled a 22-foot-tall bronze statue in Boston Common, the nation’s oldest public park, honoring the relationship between the Rev. Martin Luther King Jr. and his wife, Coretta Scott King. Sculptor Hank Willis Thomas found inspiration in a photograph of the civil rights pioneers embracing after King learned he had won the 1964 Nobel Peace Prize.

“This work is really about the capacity for each of us to be enveloped in love, and I feel enveloped in love every time I hear the names and see the faces of Dr. King and Coretta Scott King,” Thomas told the Boston Globe.

His work depicts four intertwined arms. From one angle, the limbs form a heart, representing the couple’s love. But much as Chicago’s landmark “Cloud Gate” sculpture quickly became known as “The Bean” for looking like, well, a giant bean, legions of amateur art critics aren’t seeing what Thomas intended.

Many took particular issue with the fact that the Kings were not depicted in full.

“Given that I am not White, I am safe from ANY charges of racism for saying the MLK embrace statue is aesthetically unpleasant. The famous photo should have been a FULL statue of the couple and their embrace. What a huge swing and miss in honoring the Dr & Mrs King. SAD!” tweeted Boston Herald columnist Rasheed N. Walters.

“Show me a white man that was honored with a statue of only two of his limbs,” tweeted comedian Javann Jones.

“That MLK statue looks obscene from certain angles, but when you see the whole thing you realize it’s supposed to depict the result of Martin Luther King Jr. and [Coretta] Scott King having gone through the teleporter in The Fly together,” tweeted the Daily Wire’s Frank J. Fleming.

Many others, though, cracked more vulgar jokes about what they saw as a provocative assembly of hard-to-identify body parts.

Coretta King’s cousin Seneca Scott blasted the artwork in an essay for the online journal Compact, which he titled “A Masturbatory ‘Homage’ to My Family.” “For my family, it’s rather insulting,” he wrote, adding that the “sculpture is an especially egregious example of the woke machine’s callousness and vanity” that to him seemed like an especially expensive but empty gesture.

“Ten million dollars were wasted to create a masturbatory metal homage to my legendary family members — one of the all-time greatest American families. … How could anyone fail to see that this … brings very few, if any, tangible benefits to struggling black families?” Scott wrote.

The piece, of course, was both commissioned and sculpted with good intentions. The city released a call to artists in 2017 to create a memorial to the Kings, who met in Boston, eventually choosing Thomas, a renowned Brooklyn-based artist.

On Friday, it was unveiled at an invitation-only ceremony in the same place King led 20,000 people on a freedom march more than 50 years ago.

Mayor Michelle Wu said the sculpture might help the public live up to King’s vision, “to open our eyes to the injustice of racism and bring more people into the movement for equity,” according to the Boston Globe.

“The recognition of Coretta Scott King shows that we are a city that will take on the full legacy of the Kings and challenge injustice everywhere from a place of love,” Wu said in a statement. “As we continue our work to ensure Boston is a city for everyone, this memorial is a powerful call to embrace each other more, embrace our nation’s history, and embrace what’s possible when we center community.”

“I hope people who experience ‘The Embrace’ understand or overstand the power of connection for the enhancement of our lives,” Thomas told the paper, adding, “I am excited about building markers that can direct us toward nonviolent coexistence and allow us to tell new stories about our history, our present, our future.”