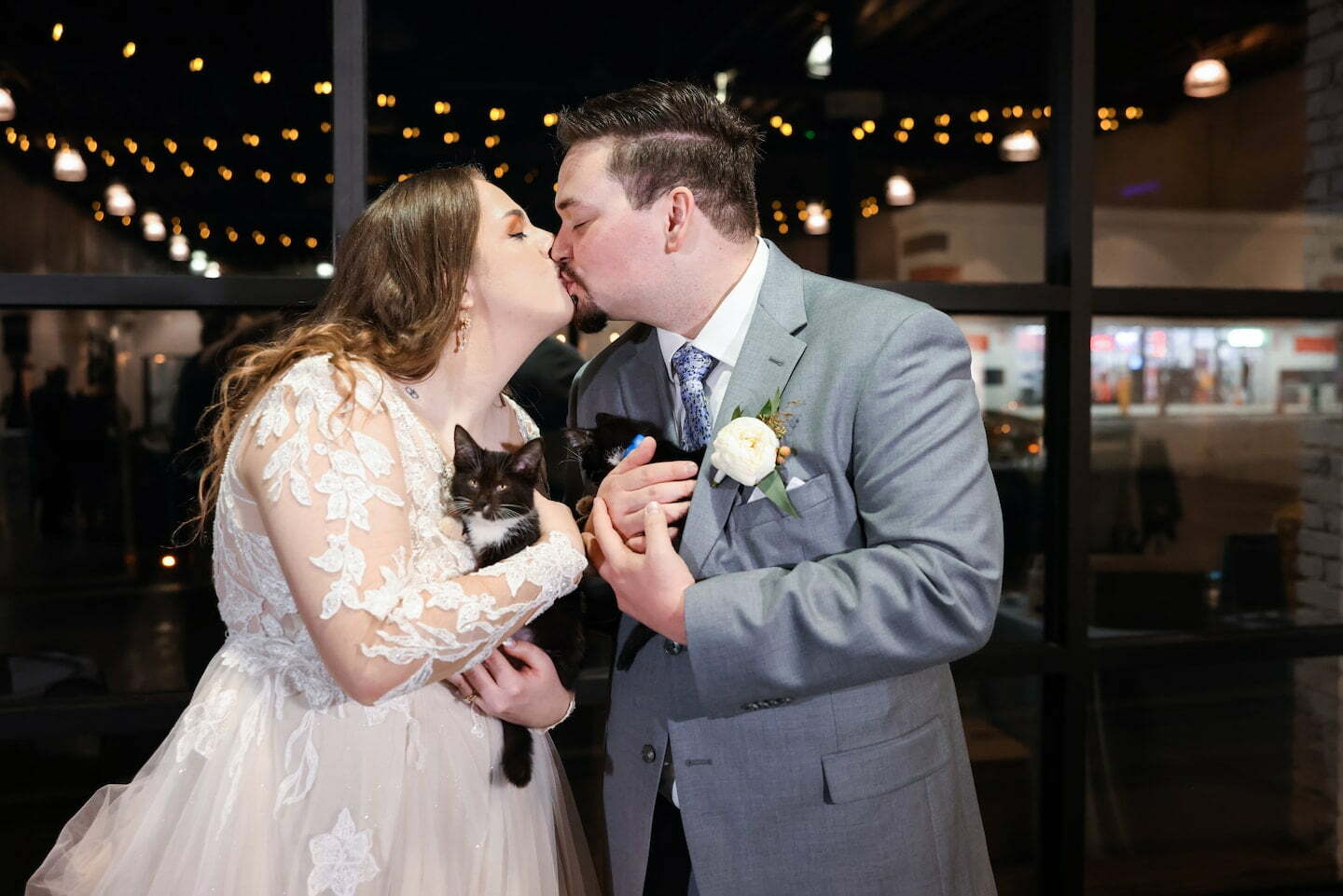 At her wedding in Tampa last month, Cassie Roth didn’t toss her bouquet or a garter after the ceremony. Instead, she and her husband, Jonathon Roth, tossed a cat.

Not a real cat — a velvety, stuffed black cat with gold-rimmed eyes.

When one of Roth’s bridesmaids, Christina Soto, dived for the plush feline and scooped it off the floor, she agreed that she would visit the Humane Society of Tampa Bay at a later date to adopt a shelter cat.

During the cocktail hour — with drinks named after the Roths’ cats — wedding guests were also given the opportunity to meet five kittens in need of homes.

“Weddings can be wasteful, so we were trying to be mindful of ways we could give back when we got married,” said Cassie, 27, noting that she and Jonathon have loved cats since they met in high school.

“We wanted to incorporate cats somehow in our wedding and help a few animals in need,” she said. “Everyone loved it — they said they’d never been to a wedding like that.”

A video of the cat toss posted on TikTok by one of the Roths’ wedding planners after the ceremony on Dec. 30 has more than 4 million views.

“To us, it was a fun way to do something that broke tradition a little bit,” said Jonathon Roth, 27. “We don’t even have TikTok, so we were shocked to see our wedding blowing up on social media.”

The cat toss was organized by Kelly Nova and Ilana Karcinski, the founders of FairyTail Pet Care — a wedding service that helps couples incorporate their pets into their vows and also host small pet adoption events.

Since 2015, Nova and Karcinski have dressed up more than 1,100 dogs in tux collars or bows and arranged to bring them briefly to the ceremony to walk down the aisle, sniff around the guests and pose (ears up, tongues out) for photos with the wedding party.

Only eight cats have had the same honor, Nova said, adding that the Roths’ cat toss was a first. Decorations at the Roth wedding said “We’re getting meowied!”

“Dogs realize all their friends are there, so they stop to say hi to everyone and it’s a really cute moment,” Nova said. “But a cat truly has be comfortable with walking on a leash, and that’s rare. We don’t see many of those.”

The Roths wanted to include their own cats, Smokey and Ella, in their wedding, but they didn’t think they’d handle it well, Cassie said.

“We decided it was a better idea to have the Humane Society show up with a few kittens that needed homes and give people the opportunity to look into adopting them,” she said, noting that the kittens were kept in small pet tents in a quiet corner of the venue.

Two of the five kittens were adopted after the interested guests filled out a “hold” form, then went to the Humane Society the next day to complete the necessary paperwork, Jonathon said.

“We had people look at the kittens during the cocktail hour, so they wouldn’t get freaked out,” he said. “It was the perfect blend of socialization and quiet time, and it also raised awareness.”

That’s what Karcinski and Nova had in mind when they added a Yappily Ever After adoption feature to their events in 2020.

“We’ve both volunteered with shelter animals since we were kids,” said Karcinski, 31, noting that she and Nova, 32, are longtime friends. “It seemed like a natural fit.”

Nobody is pressured to adopt puppies (or in the Roths’ case, kittens) at a wedding and anyone who is interested is screened by the Humane Society, she added.

At age 5 he vowed to go to college with his mom. They just graduated together.

In addition to the Roths’ two wedding kittens, about 80 dogs have found permanent homes, Nova said.

“A lot of times, couples will choose to have adoptable puppies carried down the aisle by the wedding party instead of flowers,” she said. “One great side effect is that it helps the dogs to become socialized.”

She and Karcinski said they were inspired to start FairyTail Pet Care after they received numerous requests to allow pets when they both helped coordinate weddings for a Tampa hotel.

“People wanted their pets to be included in their special day, but they didn’t know how to work out the logistics of picking the pets up, keeping track of them at the venue and dropping them back off,” Nova said.

“A lightbulb went off for us,” Karcinski added. “We immediately came up with the idea for wedding day pet care.”

Adding an adoption element to the mix seemed like a perfect next step, she said, and pet-loving couples who enlist their services seem to agree.

Jenn and Jeff Karstens said all five of the Humane Society puppies brought to their Tampa wedding in May 2021 found new homes, including a pup that they adopted.

The Karstens’s dog, Pablo, was included in their wedding, and they decided they had room for a second dog that they named Wrigley, said Jenn, 33.

“Everyone at the wedding couldn’t get enough of the puppies,” she said. “We’re big dog people, so having pet adoption a part of our day was a great fit.”

“Jenn always wanted another dog, and I was like, ‘No, one is enough — we’re going to get married and want to travel,’” added Jeff, 40.

“Then the next thing I know, we’re adopting Wrigley and I’m holding her up like Simba from ‘The Lion King,’” he said. “I’d highly recommend to anyone to have adoptable puppies at their wedding.”

Jillian and Parker DeKorte of Largo, Fla. included their dog Riley, and a relative’s dog, Cooper, in their December 2022 wedding ceremony, then let five puppies loose to play with the guests. Three of them found new homes, said Jillian, 27.

“We couldn’t imagine a better way to share our love,” she said. “Because of our wedding, three pups found a home in time for Christmas.”

“If you ask anyone who knows us what we love most in life, they’ll say dogs,’” said Parker, 26. “When we heard we could have adoptable pups [at our wedding], it was a no-brainer.”

“It’s so us, and we knew it would create a lasting memory we’ll cherish for the rest of our lives,” he added.

Cassie Roth said she feels the same way about her nontraditional cat toss.

“If it inspires somebody else to do the same thing and saves a cat’s life, I’m all for it,” she said.