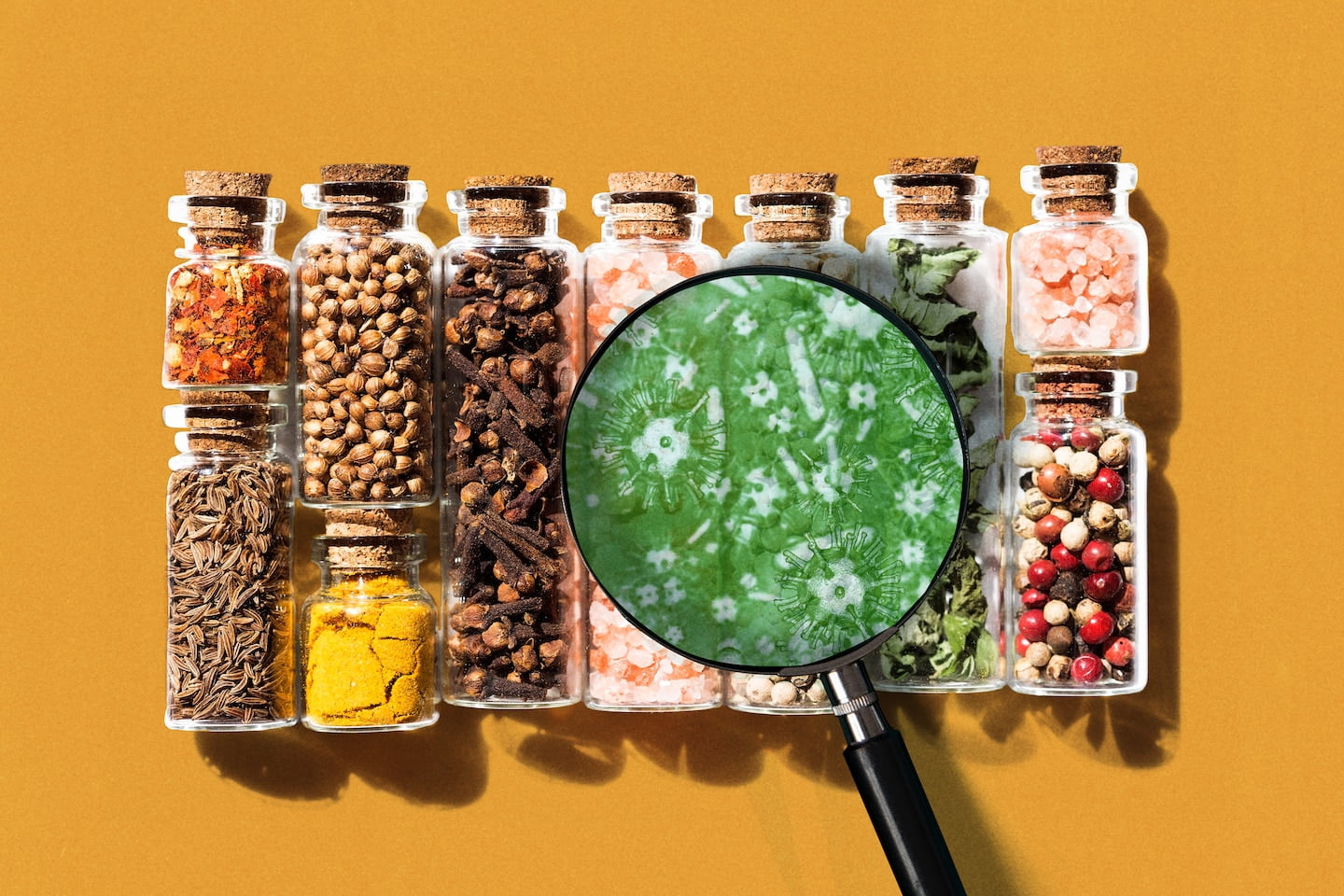 If you had to guess the germiest spot in your kitchen, you might think of the refrigerator handle, the cutting board or maybe the inside of your sink. But a new study shows that icky bacteria could be more likely to be lurking in an unexpected spot: your spice drawer.

Researchers in a recent study commissioned by the Agriculture Department’s Food Safety and Inspection Service examined how people preparing turkey burgers cross-contaminated various surfaces in a kitchen. (Sneakily, the participants weren’t told they were participating in a food safety study; instead, they thought they were testing new recipes.)

Spice jars used in the meal, the researchers found, were far and away the most cross-contaminated spot — 48 percent of those used were found to harbor bacteria from the turkey.

The study, recently published in the Journal of Food Protection, noted that while consumers might have heard about the importance of cleaning cutting boards or wiping down handles, they might not have thought about their spice jars. “Consumers may not necessarily think to wipe down or decontaminate spice containers after cooking because they are not typically targeted as high risk for cross-contamination in consumer messaging,” the study says.

In the study, researchers watched 371 people prepare seasoned turkey burgers — which had been inoculated with a harmless tracer bacteria often used as a “surrogate” for the norovirus — and a premade salad, using sterilized kitchens of different sizes, from apartment-style ones to teaching kitchens in extension centers. Once the meals were done, the scientists collected swabs from 12 surfaces, including utensils and countertops.

Most surfaces tested positive 20 percent of the time or less, compared with the spice jars’ 48 percent. And the bacteria found on the spices was in higher concentrations than in other areas, according to the study, although cutting boards and trash-bin lids were also found in similar concentrations. That “could be due to their close proximity to the region in which turkey patty handling occurred, the lack of attempts made to wash hands between handling the ground turkey and seasoning the patties with the spices, the lack of attempts made to clean or sanitize the spice containers after handling, and the high number of times the containers were handled,” the study says.

The results surprised even the food safety experts conducting the study, said Donald Schaffner, a professor in the food science department at the Rutgers School of Environmental and Biological Sciences who led the research. “We had not seen evidence of spice container contamination before,” Schaffner told Food Safety News. “Most research on the cross-contamination of kitchen surfaces due to handling of raw meat or poultry products has focused on kitchen cutting boards or faucet handles and has neglected surfaces like spice containers, trash-bin lids and other kitchen utensils. This makes this study and similar studies from members of this group more comprehensive than previous studies.”

So what should home cooks make of the study? Benjamin Chapman, the head of the department of agricultural and human sciences at North Carolina State University and a senior author of the study, said he doesn’t think people need to immediately douse their spice racks in bleach. Many pathogens become less potent on surfaces, he noted.

But he said the findings point to a need for more hand-washing during the meal preparation process, not just before and after. “We’ve tried to distill messages into things that are simple, like after handling meat, wash your hands,” he said in an interview with The Washington Post. Some people, though, might think of the seasoning step as being part of the handling of meat, he noted. “The more we look at what people actually do in the kitchen, we realize we have to be more prescriptive — like, when you’re done handling a turkey patty, you need to wash your hands before you grab that spice jar.”

Spices are a stealthy potential germ magnet, Chapman said. “It’s a hand touch point, but not one we think about, because it’s mixed into the meal preparation.”

Cooks who have done a good job of hand-washing don’t need to be as vigilant, but if you think you might be at risk of cross-contamination, Chapman suggested wiping spice jars down with a soapy cloth and finishing with a wipe of a disinfecting kitchen spray. And he noted that not all meals are equal-opportunity germ-spreaders. The dish he and the other researchers came up with for the study — a patty of ground turkey meat that requires forming by hand — was designed to be a “worst-case scenario.”