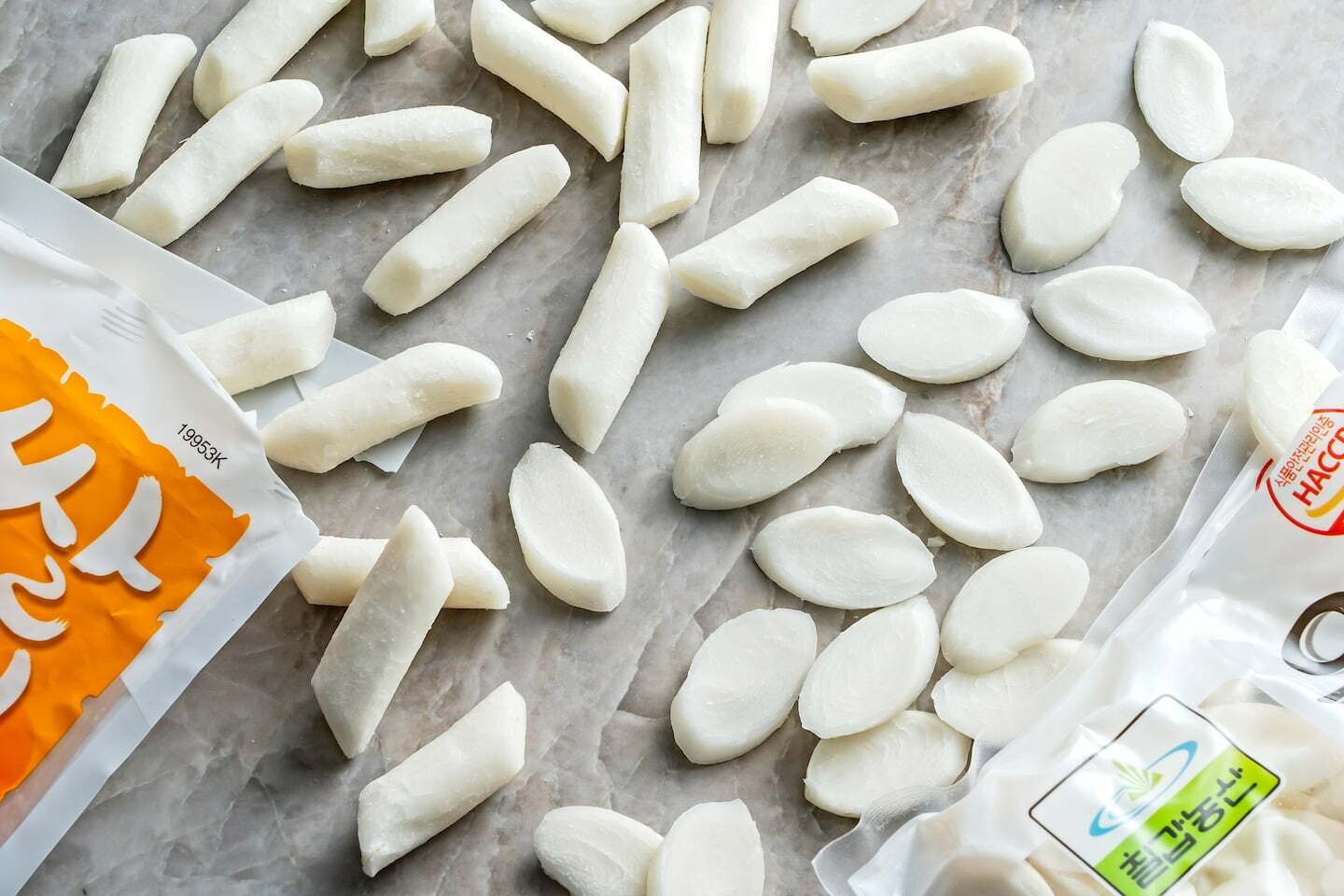 Korean rice cakes, frequently Romanized as tteok (though you might find variations in spelling), are a staple ingredient in the country’s cuisine. Typically made by steaming and then pounding a simple dough of rice flour, salt and water before rolling into cylinders, rice cakes have a delightfully bouncy, chewy texture. Here’s what you need to know about tteok and how to use them.

Growing up in Korea, cookbook author Emily Kim, better known as Maangchi, would take rice soaked at home to her local mill to be turned into rice cakes. Now based in New York City, “sometimes you can find it in a Korean grocery store freshly made,” Maangchi said, but you’re more likely to find prepared rice cakes that have been refrigerated or frozen. (Or if you’re looking for a project, you can even make them at home.)

“Flavor-wise, it is very much like rice,” chef and cookbook author Hooni Kim said, calling it a blank canvas. However, “the good ones have a touch of nutty, popcorn-y, very, very savory flavor,” which might be a result of other ingredients used in addition to the base recipe, such as toasted sesame oil used to keep the tteok from sticking while they’re being rolled or a coating of toasted soybean powder. But instead of rice cakes’ flavor, texture is their prized feature. “When cooked correctly, it’s soft, pillowy, chewy, starchy,” Kim said. “Very fun to chew.”

Roasted seaweed is the powerhouse ingredient in this pantry pasta

Tteok come in a variety of shapes and sizes and can be composed of different ingredients. The first thing to note is that while most rice cakes that I’ve encountered are just made from rice flour, they can contain other grains, including wheat flour, so it’s important to check for gluten-free labeling if you have a dietary restriction.

“The way you make these rice cakes are pretty much the same formula, except the size and the shape is going to be different based on what you want to use it for,” Kim said.

Kim says he believes the original form was garaetteok, which are about an inch in diameter and can be up to 12 inches long. This shape seems to be less commonly available, perhaps sold only at Korean grocery stores. If you are able to find them, Maangchi suggests placing them under the broiler until slightly scorched, then dipping them in rice syrup or honey.

One of the most common shapes is called tteokguk-tteok, which roughly translates to “rice cake soup rice cake” according to Kim. This shape is made by thinly slicing garaetteok, usually on the bias, to get oval-shaped coins. These sliced rice cakes, as you can probably infer from the name, are typically used for soup — tteokguk is “the traditional Korean dish for Lunar New Year,” Kim said — but you can also use them in sautes and stir-fries.

The other common shape are thinner cylinders roughly two inches long and about a half-inch thick. These rice cakes are most popularly used in tteokbokki — the Korean street food of rice cakes cooked in a spicy gochujang-based sauce — and sometimes called tteokbokki-tteok.

Rice cakes can be found fresh, refrigerated or frozen from Korean, international and other specialty grocery stores — and even online. (Rice cakes will last for three to four months in the freezer.) When shopping for rice cakes, Maangchi suggests avoiding packages with powder on the surface of the cakes. “Don’t buy those because it means they are a little old and dried out, and will crack when you cook them,” she wrote on her website.

Should you rinse rice? Here’s when, why and how to do it.

When it comes time to cook tteok, the biggest point of consideration is whether they need to be soaked and for how long.

Both Maangchi and Kim agree that fresh rice cakes do not need to be soaked before using in recipes. For refrigerated or frozen rice cakes, Maangchi suggests a “very short” soaking time because “I don’t know how long the rice cakes were in the freezer or refrigerator.” For her, a quick soak as short as 10 minutes helps speed up the cook time. “Otherwise the rice cakes are dried very hard and you have to cook them a long time to make them smooth,” she said. In addition, soaking removes any excess starch on the surface of the rice cakes, which Maangchi likes to do so that it doesn’t thicken her dish too much.

Kim, on the other hand, soaks vacuum-packed rice cakes overnight and does the same with ones he gets from a rice cake shop if they’ve been sitting around for a while. “When they get really old, it takes a lot longer to hydrate to make soft,” he said. “The drier, not-so-fresh rice cakes, you’re going to have to boil it for a good maybe five, 10 minutes before they soften up.”

However, some of the recipes I found online and in cookbooks made no mention of soaking rice cakes before using them. In my (admittedly very limited) experience, I didn’t find any noticeable difference when I did a quick soak versus using them straight from the package. But this may come down to specifics with different manufacturers and producers.

“We have two different places where we get it. We definitely know one place is better than the other, and the rice cakes hold in the soup better and become softer faster,” Kim said. “When they’re out, we have to use somebody else’s rice cakes. And those we don’t even imagine cooking without soaking overnight in water.”

Kim notes how there can be a huge difference in the texture, flavor and ease of cooking of tteok from brand to brand or store to store. “The not-so-well-made rice cakes, they disintegrate really fast after they soften. The really good ones keep their shape and stay soft.” So once you find rice cakes that you like, it’s a good idea to stick with them if you can. (I found that the ones by Ourhome, with the large red stripe down the middle of the package, disintegrated once softened.)

Get the recipe: Korean Rice Cakes (Tteok) With Spicy Sausage and Kimchi

When it comes to cooking with rice cakes, they’re “very versatile,” Kim said. His favorite way to enjoy them is tteokguk — “It’s good any time of the year,” he said — but he also eats them with any sort of leftover stew or chili. “It could replace rice in most dishes, whether it be Asian or not. Noodle dishes, as well.” As such, Maangchi likes to use tteok as the starch to round out her meals. One point of caution is that “you don’t want to put it in anything very mild in flavor, because that would just dilute that flavor even more,” Kim said.

As an easy introduction, you could just boil them until they float and toss with your favorite pasta sauce. Another simple idea is to add them to your favorite soup or instant ramen. If using them in a saute or stir fry, “even without any kind of liquid, if you cook it in really [hot] oil, it will get soft and crispy,” Kim said.

If you’ve never tried rice cakes, this is your sign to add them to your pantry inventory to discover the wonder that they are. And soon, you won’t be able to live without them. For Kim, “I feel safe always having some in my freezer.”