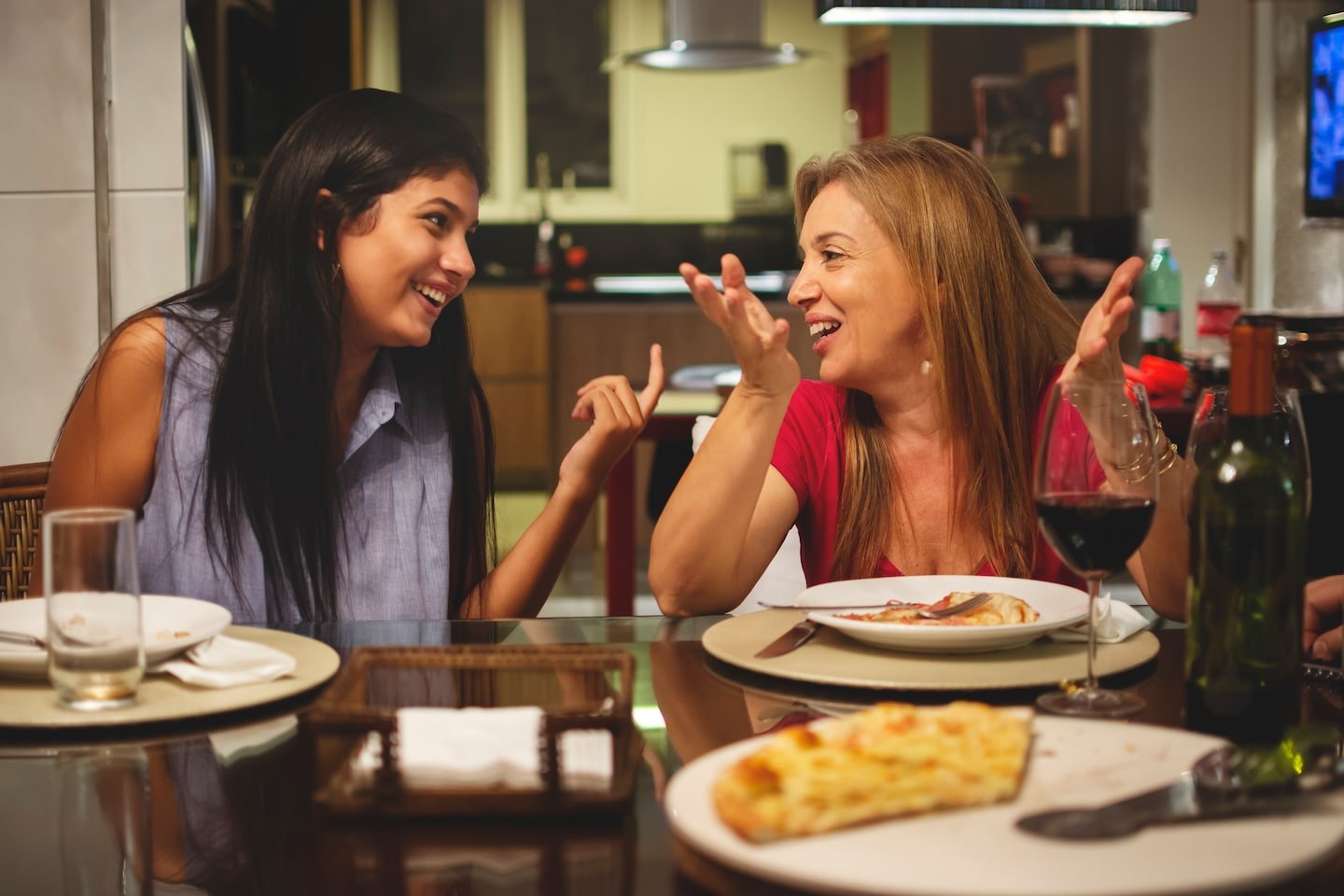 A few years ago, I asked my high school English class to engage in a thought experiment. “Imagine that a person’s final words were, ‘It’s been a good life.’ What might that mean?”

For Robert Waldinger, this question of what constitutes the “good life” isn’t a hypothetical. Waldinger directs the Harvard Study of Adult Development, which, for more than 80 years, has followed the lives of 724 participants and more than 1,300 of their descendants. When it comes to understanding human flourishing, Waldinger has the receipts, and he has detailed them in the new book, “The Good Life: Lessons from the World’s Longest Scientific Study of Happiness.”

These lessons aren’t just for adults. The findings offer our kids a healthy framework for thinking about success, relationships and life’s inevitable challenges. And since kids learn best from the adults in their life, here’s what Waldinger says that parents can take away from his research.

If you ask parents what they want most for their kids, many will answer, “I want them to be happy.” But happiness is an emotion, a momentary state of being.

“There is a myth that you can eventually get to a place where you are happy all the time,” Waldinger says. “We need to unpack the word happy and ask, ‘What do I really want for my kids?’”

Waldinger’s answer comes down to two concrete actions that form the foundation of wellness: engaging in activities we find meaningful, and connecting with people we care about and who care about us.

“I think of happiness as an accident,” Waldinger says. “But if you put in these ingredients of well-being, you make yourself more accident-prone. We can teach our kids to prepare the ground so that happiness comes more easily, more often.”

One clear finding from the Harvard study is that a good life is never free from challenges, stress or pain. In fact, “A good life is forged from precisely the things that make it hard,” Waldinger writes.

Waldinger’s research highlights humanity’s ability to adapt in the face of obstacles beyond our control. He subscribes to mindfulness teacher and author Jon Kabat-Zinn’s metaphor describing the struggles of life as waves in the ocean: “You can’t stop the waves, but you can learn to surf.”

For parents, think of the challenges that came with bringing home your first child. You struggled and learned and worked through it — a process that was easier if you had at least one person supporting you. That’s a message to share with kids.

“Often the way we adapt is through our connections with other people,” Waldinger says. When we find creative ways to reach out to friends, family, co-workers or even strangers, we not only find short-term relief, we engage in work that has long-term benefits.

Relationships are the fourth ‘r’

According to Waldinger’s research, “The people who were most satisfied in their relationships at age 50 were the healthiest (mentally and physically) at age 80.” So how do we intentionally help our kids start down this path?

Relationships require tending, says Waldinger, and people who have the strongest relationships are “proactive, reaching out rather than just assuming that friendships are going to take care of themselves.” As parents, we can model this for kids by reaching out to our own friends. Let them see you go on a walk with a friend, text a sibling, take cookies to a neighbor, for example.

Our kids also learn at an early age that relationships aren’t easy. Sometimes friends hurt each others’ feelings. While not every relationship will last forever, we need to show our children “that people can disagree and get mad at each other, and it doesn’t have to be the end of a relationship.” That might look like describing how you repaired a relationship by being willing to reach out, listen, or apologize.

“It’s like physical fitness,” Waldinger says. “You don’t go to the gym once and then say, ‘Good, I’m done.’ It’s a practice.”

Two social skills that correlate with strong relationships, Waldinger learned, are generosity and radical curiosity, a “real, deep curiosity about what others are experiencing.”

Couples are better at knowing what their partner is thinking and feeling at the beginning of a relationship than five or 10 years down the road, studies show. As a result, we can slowly lose connection to the people we should be closest to. “Now why is that? It’s because we stop looking,” Waldinger says. “When you first get together with somebody, you’re really attuned. You are trying to read all the signals you can get, and so you’re really paying attention.” At some point, we stop paying attention to each other with the same intensity.

To practice radical curiosity, Waldinger says, look at one person in your life and ask, What’s here about this person that I haven’t noticed before? “It could be anything, even the way sweat forms on your partner’s forehead.” Radical curiosity can be transformational in family relationships because “we get lulled into the assumption, ‘Oh, I know this person. I know how they’re going to react.’”

Take our kids. When they are newborns, we are hyper aware of every sigh, smile and cry. When they are toddlers, we note each milestone. Years later, do we respond to our 8-year-old’s meltdowns with the same curiosity? The middle school brain develops more rapidly than at any age except birth to 3: Are we paying attention to our 11-year-old’s cognitive leaps?

“We all respond to somebody else’s genuine interest. It’s a big deal. It means so much to have someone just want to know what’s happening with you,” Waldinger says.

Parents often seek to be the buffer between kids and challenges rather than giving kids the space and support to develop their own buffering strategies. “We don’t want a life without stress. We really don’t,” says Waldinger. “We know from research that challenges actually can be energizing, they can be meaningful, and they can promote growth. Sometimes it’s only in retrospect, but you can feel like, ‘Boy, I came through that and it was hard, but it was worthwhile.’”

When our kids are distressed and we try to single-handedly fix the situation for them, then they don’t develop the capacity to encounter challenges and learn from experience that “this is going to pass, and in the meantime, there are things I can do to feel a little bit better.”

Rituals and routines are connectors

Waldinger’s research points to the protective power of family rituals and routines. Our kids need connection, even when they become teens and appropriately try to pull away.

Teenagers are classically ambivalent, he says. They want to be independent and mature, and they want to stay a little kid — a conflict epitomized by the classic parenting book title “Get Out of My Life, but First Could You Drive Me & Cheryl to the Mall.”

It’s normal for teens to begin to resist routines like family dinner, but those routines provide a connective tissue that our kids need and crave. “Your child might signal, ‘I don’t need my family, to heck with all of you,’ and at the same time go along grudgingly and be reassured by the structure,” Waldinger says. “It doesn’t mean we make our teens do everything. We pick our battles, but some structure really matters. For most kids, it’s reassuring that structure stays while they’re going through a tumultuous time.”

In fact, research shows that regular family dinners correlate with higher grade-point averages, greater self-confidence, and lower rates of substance abuse and depression. As Waldinger notes, simply being in the same room together once a day is a ritual that helps family members stay connected.

As parents, it’s easy to get caught up in a tough moment and think your child is on the wrong path.

One of the best things this Harvard study provides is perspective. “What we’ve seen — following these lives for 85 years — is that change happens,” Waldinger says. “People take unexpected turns and twists.”

He knows this not just from data, but from experience. “Our older son was absolute hell on wheels as a baby. He wouldn’t sleep. He was terrified of everything. He screamed all the time. And we just thought, ‘This is just going to end in disaster’ because he was such a dysregulated little boy,” Waldinger says. “He is the most wonderful, mellow young man. Thank God for child development. So here’s hope for parents: Think back on all that has changed for you and your child in a good way … That is going to continue in ways that you cannot see right now.”

Deborah Farmer Kris is an education journalist, founder of Parenthood365 and author of the “All the Time” picture-book series. You can follow her on Twitter: @dfkris.