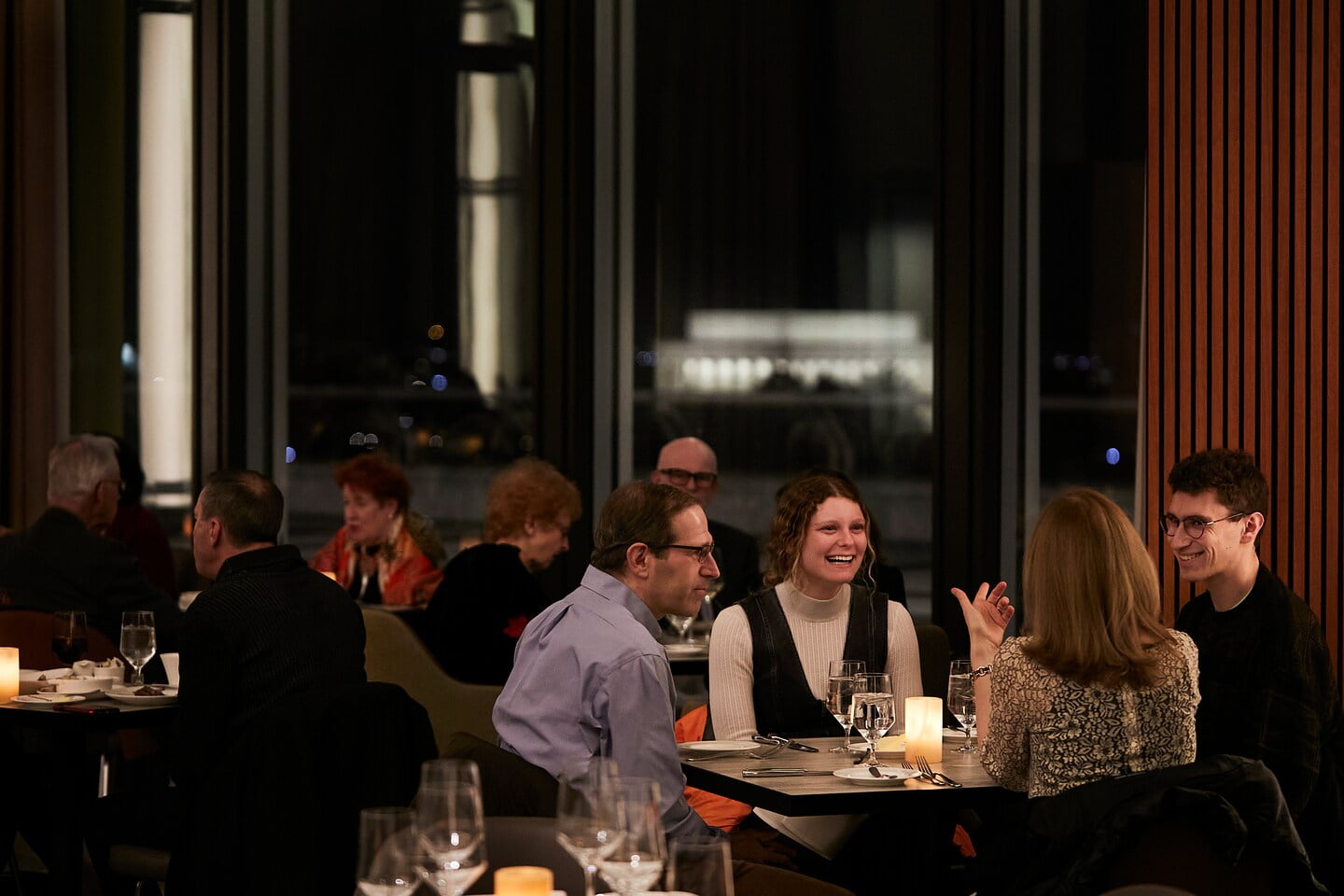 Rooms with views remain few and far between on the dining landscape, and they generally come with a caveat: food that’s nothing to write home about.

Not everyone who visits the window-wrapped restaurant atop the John F. Kennedy Center for the Performing Arts in Washington gets glimpses of some of the city’s famous landmarks — the dining room seats 265, after all — but plenty of them do. A real estate friend who joined me at the Roof Terrace Restaurant for dinner recently reminded me about the importance of location, location, location. Looking up from her plate and out a nearby floor-to-ceiling window, which captured the Lincoln Memorial, she said, “It’s nice to remember where we live.”

Yes, ma’am. And did I mention her steak was prime, cooked the shade she asked, rich with a knob of herbed butter and enjoyed in the company of hand-cut, twice-cooked french fries?

It’s been a decade since I last wrote about the Roof Terrace. My recent return was prompted both by the passage of time and readers asking me, week after week in my online dining discussion, about where to eat near the illuminated wedding cake of a performance space on the Potomac. I couldn’t recommend the closest possibility without checking out the changes, which are considerable: A million bucks was spent on upgrades while the dining room was closed during the pandemic, says Jared Richardson, the general manager of the operation, run by Restaurant Associates. The chef is different from my last look, too. New York native Jaime Montes de Oca Jr. now oversees the kitchen crew of a dozen or so cooks.

I’ve never been on a cruise, but this sleek sprawl in the sky bears a resemblance to some of the ocean liners I’ve seen in brochures and on YouTube. I’m talking illuminated columns, soaring ceilings, two-story-tall mirrors that reflect the outdoors and tall, semicircular booths to break up the space. The scooped chairs share the same shade of orange in the carpet and are designed with comfort in mind.

A dash more intimacy is found in the handsome lounge located between the host stand and the main dining room. The seats in the lounge — bar stools, banquettes and tall tables — are first come, first served. “To our first Kennedy Center musical!” a mother toasted her mocktail-sipping daughter the night I bellied up to the blue-tiled bar. The restaurant also features a private dining room that can seat 26. (The tinny elevator music makes me wonder why the restaurant doesn’t offer a preview of show tunes instead.)

Want to know what a bum day is for a food critic? It’s when a chef or menu unexpectedly changes between review visits. The Roof Terrace streamlined its menu after my maiden voyage, er, dinner, in late December. I was all set to tell you about a fricassee of shrimp, mussels and sea bass splayed over saffron rice and ringed with zesty sauce américaine. I returned in January only to find that and other dishes gone, replaced by a list resembling something closer to that of a steakhouse.

“What time is your show?” is part of the greeting, and it underscores the challenges unique to this restaurant, which seats the majority of reservation holders in a single wave. Water is poured immediately, bread comes out in a flash, and your drink materializes faster than you think possible. The staff of 30 hosts and servers is so well-rehearsed, there’s rarely the sense you’re being rushed.

The first courses, gathered in a collection called “prelude,” play up the tried and true. Chopped yellowfin tuna bound with chili-lit mayonnaise makes for a pleasing tartare, the top of which is flattered with a nest of greens and potato chips that are too delicate to double as scoops. Still, potato chips. Of the soups, lobster bisque trumps the wan (vegetarian) French onion soup, whose thin cover of Gruyere appears to have been semi-melted by nothing stronger than a hair dryer. In contrast, each spoonful of the bisque delivers a sweet bite of seafood, a hint of brandy, and the froth of a topper of whipped cream and tarragon.

The beauty prize goes to the chopped salad, a field of lettuce decked out with eye-catching rows of yellow chopped egg, gorgonzola crumbles, glossy sun-dried tomatoes and crisp chopped bacon. Also good for sharing is the warm artichoke dip, smooth with goat cheese and cream cheese and whispering of garlic. Too bad the accompanying lavash tasted stale.

The chef, whose prior experience in Washington includes the Cosmos Club, Lafayette in the Hay-Adams hotel and the Asian-themed Zentan, demonstrates more international flair with the main courses. Crisp-skinned salmon floats to the table on a plateau of black lentils, swirled with garam masala, with a sunny carrot-coconut-milk sauce. Juicy chicken is topped with chayote slaw and served with steamed, smashed red bliss potatoes kissed with garlic oil, plus a mole sauce made with the usual suspects — chiles, bay leaf and spices including cinnamon — as well as white grapes, for subtle sweetness. There’s roasted gnocchi, too, mixed with diced butternut squash and wisps of spinach, everything tied together with parmesan cream. French fries might be my guilty pleasure, but the more virtuous side dish, roasted Brussels sprouts, still gets a fist bump from toasted hazelnuts and fig syrup.

The lofty wine prices, though, make me think I’m in Tokyo or London. The Roof Terrace pours by the glass a common La Crema pinot noir for $16, which is close to the bottle price at Total Wine. Looking for the silver lining, I like the fact you can take liquid leftovers from restaurant to show in the same sturdy cups you get at the bars in the lobby of the arts center, where the containers cost $4.50. (“Wicked” was washed back with the remains of a bottle of sublime Flowers pinot noir from Sonoma.)

By 7:40 one night, the fleet of vested servers was brushing crumbs from the booths. By 8:11, my posse was one of only two occupied tables in the expanse. Our excuse for lingering was a raised tray of petit fours, a show before the show that included chocolate ganache tartlettes and little squares of raspberry-lemon cake.

Dinner isn’t the only meal served here. Sunday brunch is another chance to graze and gaze at the city’s architecture. No thanks to the pandemic, the popular buffet staged in the kitchen has gone the way of Internet Explorer. These days, the restaurant offers every table shrimp cocktail, a plate of fresh fruit, charcuterie and cheese. Diners then choose from a selection of main courses, including a handful of evening selections, “the better value,” a server made a point of telling me when I was mulling two egg dishes. “Bottomless” mimosas are part of the $66 price, and they are refilled with speed. The breads could be better, but the bite-size desserts, including a miniature key lime tart and cream-capped cheesecake, are fun.

Daytime finds sunlight pouring through the soaring windows, a detail not everyone appreciates. The Sunday I brunched, a woman single-handedly closed the theater-length curtains near her table, prompting a hush as the rest of us lost sight of the scenery in a matter of a few forceful tugs of cloth.

The best finish, weather permitting, is a stroll around the expansive terrace ringing the restaurant. The vista is as generous as brunch, embracing as it does the Watergate hotel, Georgetown University, Washington National Cathedral, and the Lincoln and Air Force memorials. Cooler yet, there in the great outdoors, the price of admission is free.

2700 F St. NW. 202-416-8555. roofterracedc.com. Open for indoor dining 5 p.m. to 8 p.m. Tuesday through Sunday and 11 a.m. to 2 p.m. Sunday. (Times fluctuate with programming at the performance center.) Prices: Dinner appetizers $14 to $30, main courses $27 to $68 (for prime rib-eye). Bottomless mimosa brunch $66. Sound check: 73 decibels/Must speak with raised voice. Accessibility: No barriers to entry; ADA-approved restrooms. Pandemic protocols: Masks are optional for staff, all of whom are vaccinated.